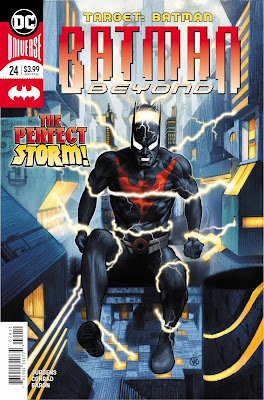 Thirty-Five years from now Batman is fighting for his life because all of Neo Gotham has lost their mind because thanks to the new Scarecrow, everyone thinks that Batman is some sort of monster.  It wouldn't be too bad if he had some help, but even his brother Matt, the new Robin has lost his wits too and is attacking him.  Let's jump into this issue and see how Terry can overcome this fear and shut the new Scarecrow down.  Let's check it out.

While this issue of Batman Beyond does do a good job in going back and tying up loose threads throughout, it also feels like it had the weight of having to end on its shoulders because even though we have a bunch of characters in this arc, like Jack Ryder, Ten, Dana and the new Scarecrow, it feels like we had to rush to get Ten in there for what Dan Jurgens wanted to do with the character, while also having Jack Ryder go back and forth between indignant to helpful to indignant again.  He just seems like a weird character to be here out of nowhere and in the long run only seems to be here because he needs to vouch for Ten by the end of the issue.  Yeah, it's nice to have some callback characters, but by the end he really doesn't feel needed because he's just taking Dana's place in telling Bruce that he's a piece of shit. 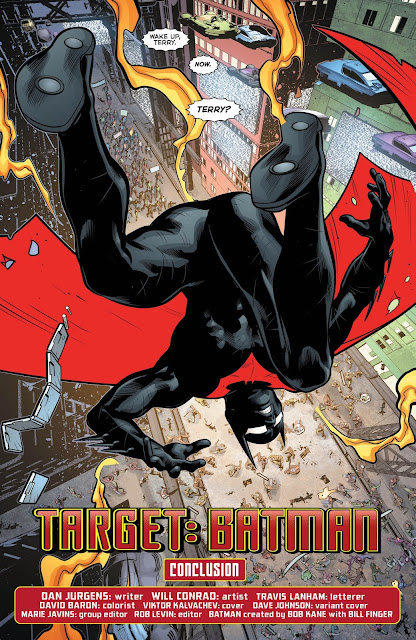 As for Ten herself.......... Well, she's immune to internet signals because she doesn't have an Alexa or some such nonsense and that's fine, but what's not fine is that everyone starts seeing Ten as a monster along with Batman and while I was happy with the amount of things that this issue tried to make sense out of, this bit just isn't addressed and felt unnecessary.  Now we're throwing a lot of characters into this arc that's introducing a new baddie for Terry, but it seems that we spent too much time with the city being afraid of Batman because by the end of this issue the Scarecrow was just a big nothing and came off undeveloped by the end and relied solely on the aspect that she's just another victim of Batman. 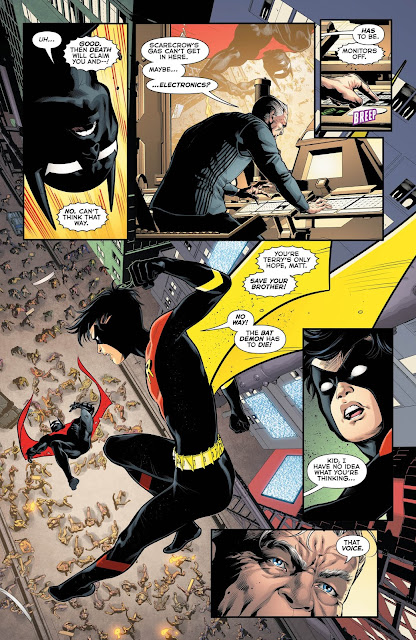 In the end, I really enjoyed the art in this issue and the majority of the things that Dan Jurgens tried to tie up to give us a tight story, but all in all there was a lot of wasted space in this arc which just led to a rushed and forced ending that didn't go anywhere besides for allowing another person into Terry's Bat Family, which is cool, but it just doesn't feel earned because we had to sacrifice the development of the new villain to get there........ plus, Ten just showing up out of nowhere felt weird, not to mention how everyone saw her as a monster too.  All in all, not a terrible issue, but totally something that should have been bigger than it was. 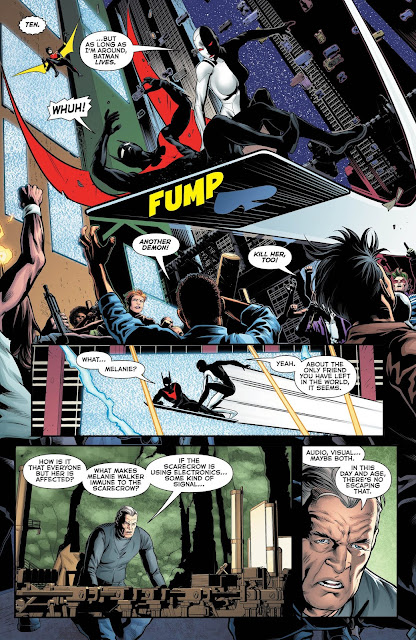 While there's some fun moments to be had in this issue, the lack of development in the villain and some of the forced scenarios to get this arc to come to a close made this issue just another in a long line of forgettable entries into this series.  Yeah, you have some big moments, but all in all there wasn't much to this issue and that's a shame because of what it could have been.