Doom Patrol: Weight of the Worlds #1 Review and **SPOILERS** 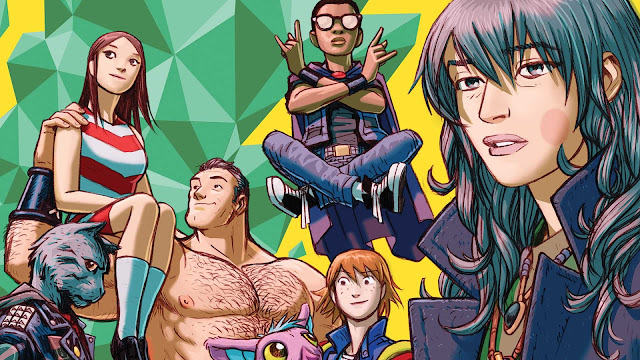 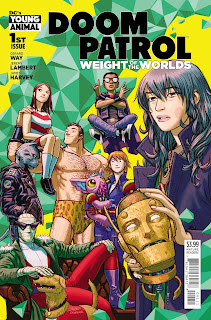 Heyyy everybody, welcome back to the Young Animal segment onnnnn the Weird Science DC Comics dot Com web-site, my name's Reggie Chris, and today we've got one (count 'em) one Young Animal book to talk about.

Make no mistake, Doom Patrol is and will always be a "Reggie book"... but I didn't want this fine site to miss out on the momentous return of the Young Animal Pop-Up imprint.  I look forward to his return, and he and I chatting up this book on the air in the near future!

The Doom Patrol are back... and, unlike the last issue of for these folks, they actually appear in this issue!  Whether that's a good or bad thing, I suppose we're about to find out...

Where Were We Anyway?

Well, Robotman discovered he was something along the lines of a "composite" character born out of fan-fiction.  Following the events of Milk Wars... which feels like an eternity ago (probably because it was)... Robotman was back in his flesh-n-bone Cliff Steel body.

Also during Milk Wars, Rita Farr returned... somehow.  I'm not going to dig thru the longboxes for the hows and whys... just, trust me... she's back.

Lucius and his family fought their way through a weak-sauce D&D pastiche... and it's revealed here that Lucius not only made it back to the "real" world, but is also now a card-carrying member of the Doom Patrol.

Ricardo (you remember him, right?)... well, it doesn't much matter... because he's dead.

The members of the Doom Patrol (including Fugg, who I don't think we've seen in years) have been pulled back together in order to have themselves an interstellar road trip, courtesy of Danny the Ambulance. 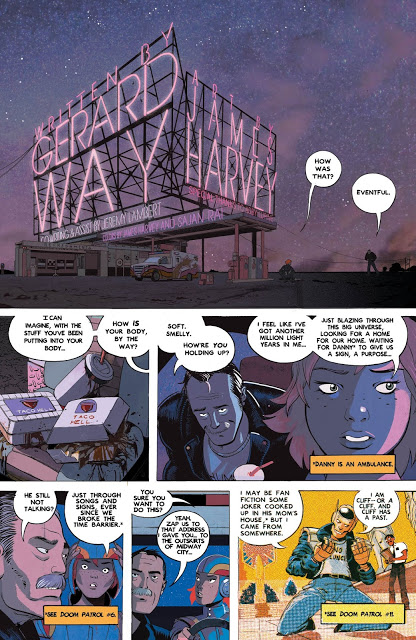 They arrive on a planet where the Marathon Eternal is being conducted... via hopping on the Treadmill Infinite.  This is a world full of weirdo characters that feel completely at home in the book with the words Doom and Patrol on the cover.  That said... In our looks at Young Animal-era DP (especially late in the run), there was this feeling of "shallowness".  It was as though we were getting the "elevator pitch" for Doom Patrol.  As much as I loathe the description "weird for weird's sake", I can't help but feel like that's kinda what we're getting here. 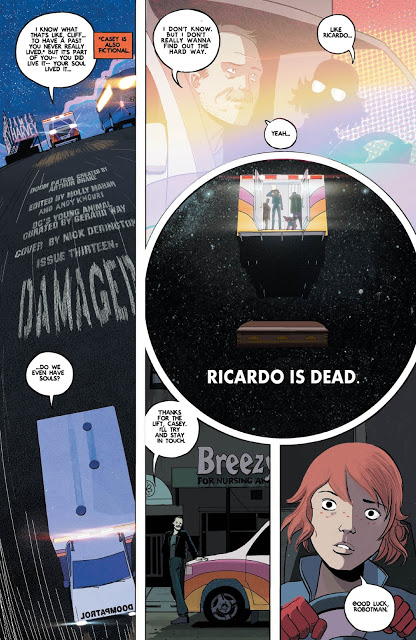 The other main story thread weaved through this issue concerns Cliff Steele attempting a reconciliation with his mother.  Despite the predictable ending, I must say this was an especially strong scene.  This is the sort of writing I want to see in my Doom Patrol.  Less "weird 'n wacky" lolrandom, and more introspective (though still somewhat twisted) character moments. 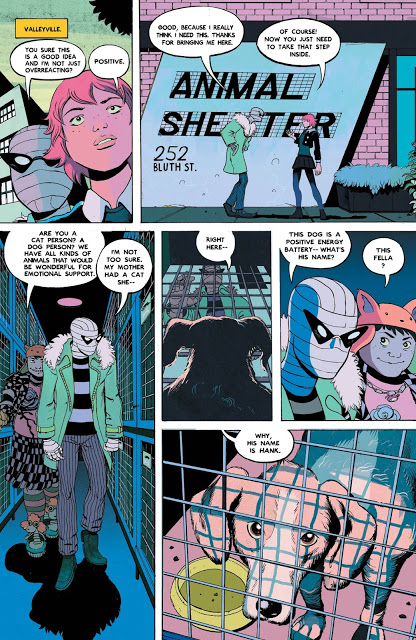 Also worth noting, Negative Man makes a pit-stop in Valleyville to adopt a dog.  The more Young and Animalistic among you might remember that's where a certain Changing Girl/Woman called home... and, while I couldn't say for certain it's the same critter, she also had a dog.

Overall, this was a decent enough reintroduction to the team, and a fine way to spend our inaugural issue.  We were completely spoiled last time around by the amazing art team of Nick Derington and Tamra Bonvillain, however the incoming art team proves they might just be up to the task of filling their shoes.

Weirdo characters, an attempt at depth, and some "meta" commentary on comic book history.  Basically everything we've come to expect from "current year" Doom Patrol.  It's good for what it is, but I'm not sure it was completely worth the wait.