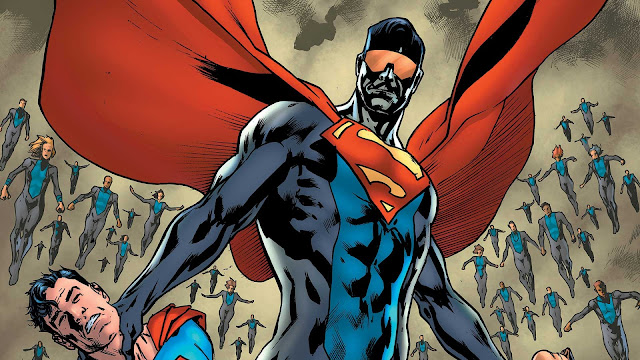 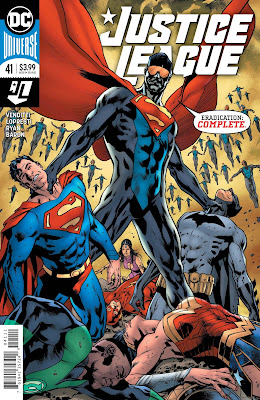 
While we wait for the continuation of Scott Snyder's run of Justice League, we're presented with a tale that feels like something that I've wanted from this book for a long time and that's just a good old fashioned world threat, where while our team may be outmatched, they'll at least have a shot in winning.  That hasn't happened lately and for this threat we see The Eradicator creating a super-race of Daxamites to continue Krypton's legacy on Earth, but first, he's going to have to get through our Justice League and Madame Xanadu.  Let's jump into this issue and see if our heroes can take on an army that's as powerful as Superman.   Let's check it out.

For this issue, we pretty much have ourselves a big fight scene, where we see our heroes trying to hold the line in Metropolis against these amped-up Daxamite threats, while Batman tries to recruit Madame Xanadu into helping them spank these baddies with magic.  For the most part, I've just explained the majority of the book.  Yeah, this issue moves by really fast and what we get out of it is the hopelessness of an actual army of Daxamites because even though we have the World's Greatest Superheroes fighting for us, they're still no match for some threats and it looks like this is one of them...... until they get some magic involved because, like Kryptonians, Daxamites really like the magic all that much. 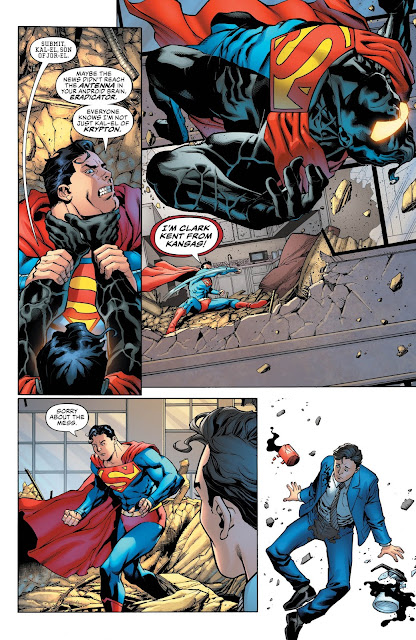 Yeah, this wasn't the best look at our heroes defending the planet and we even have the Eradicator address the world that he plans on..... you know, eradicating everyone so that Earth can become the new Krypton, but if that wasn't bad enough he is able to strike fear into everyone because while the majority of our heroes were able to escape their doomed fight, it looks like Wonder Woman was left behind and nothing spells out lost cause like watching someone on TV talking about killing you, while they hold a passed out Wonder Woman by the neck. 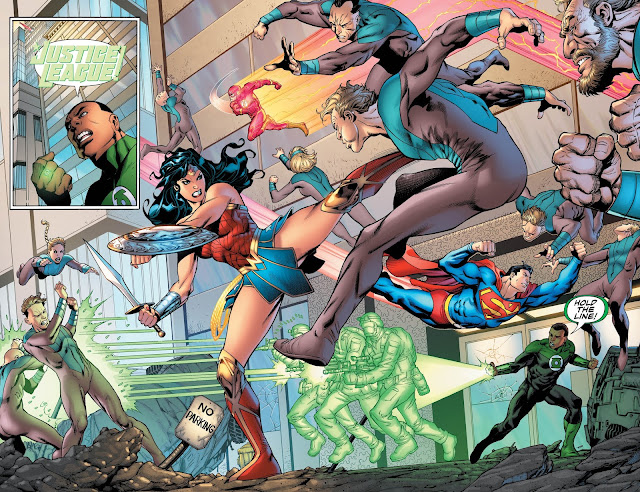 All in all, the art was fantastic this issue and I'm really enjoying what this creative team are doing for the most part, but even with my appreciation, there wasn't much to this issue beyond the big fight scene and while I'm all about an interesting fight, this one left me wanting more and I don't feel like we progressed all that much in story, beyond our heroes getting whooped right out of the gate.  The story idea is still cool as hell though and I can't wait to see what our Justice League does to overcome this situation and if we'll get more magical characters coming out of the woodwork since as of right now, that seems to be the only thing that gives our heroes the upper hand.

While I loved the art and the idea of the story we're dealing with, I would have liked a little more out of this issue than the big old fight scene that we were given.  Yeah, it was enjoyable for the most part, but this issue flew by and by the end, it didn't seem like we moved the story all that much forward, besides for showing that things can go from bad to worse with the drop of a hat.