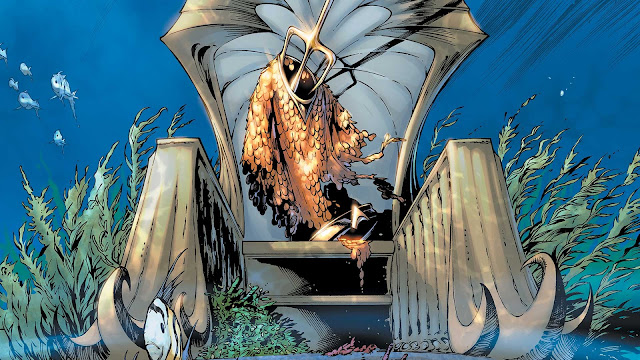 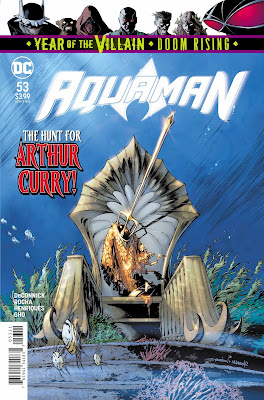 Back into the perpetual shallow end of the pool that is Aquaman! I wonder how much of the issue we’ll cede to backstory this time.

The problem with Aquaman, see, is that there aren’t enough characters in the book. Even though there’s Caillie, and Jackson, and the Old Gods, and Mera, and Murk, and Black Manta, and perhaps one or two more I’ve forgotten at the moment––what this book needs is more characters. Why not? The more the merrier. We’ve heard about this fella, this Tristram Maurer for a few issues now: founded Amnesty Bay, had some sad thing happen that caused him to build the lighthouse that was destroyed a couple of issues ago, wrote spooky H.P. Lovecraft rip-off stories far longer ago than you’d expect the average fella to manage. These stories, Maurer explains in a scene that takes for-fucking-ever, were manifestations of the real Lovecraftian demons he conjured and who had been protecting him his whole life—and one of whom killed that Ralph fella last issue. 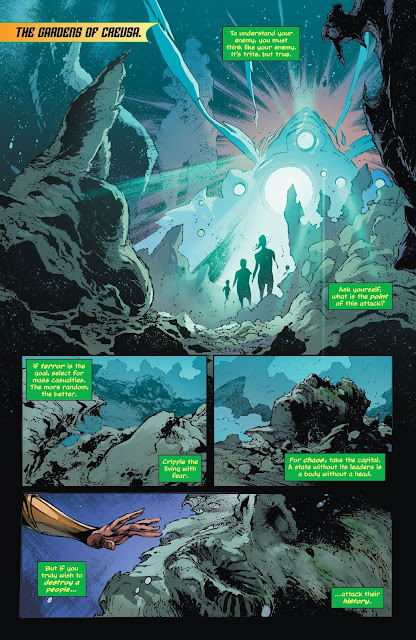 Meanwhile, Mera is furious at the damage to Atlantis caused by Black Manta’s attack, and she blames the surface dwellers. Really? Did you talk to any eye-witnesses? Wouldn’t one of them say a giant Black Manta lobbed a missile at the place? Oh well. Speaking of Black Manta, he’s sent his giant mech to attack folks at Amnesty Bay, and then…cast a laser light show of the Legion of Doom’s hieroglyphic symbol? I have no idea what’s happening in this book anymore. 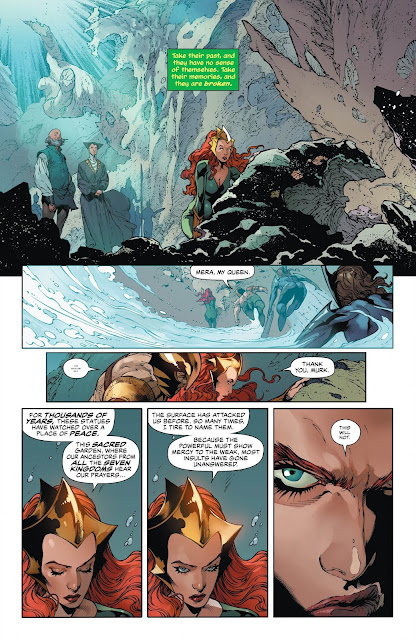 This book has gotten really weird and feels like it’s going nowhere, very slowly. This Year of the Villain is happening in its own timeline, and it’s tough to keep the bad guys straight. It looks like everything has converged now, but I don’t understand what Black Manta is doing with the gigantic robot that he couldn’t do already. The art is alright, but things get a little cramped on some pages, which may be more telling than we know. 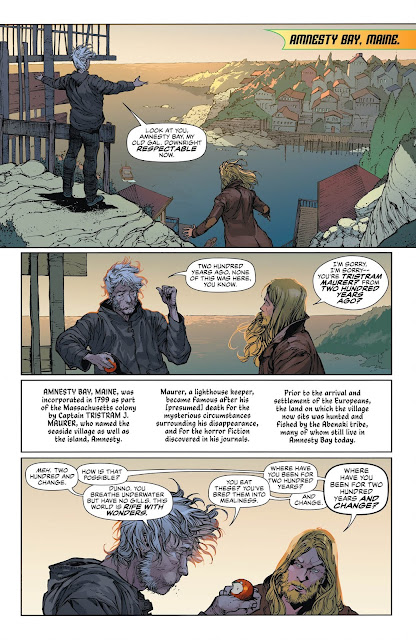 If you’re new to Aquaman, this is a good issue to jump on…and so are the most recent five issues, because they’ve all been recap. There’s less forward progression in this story than the Mary Worth comic strip.