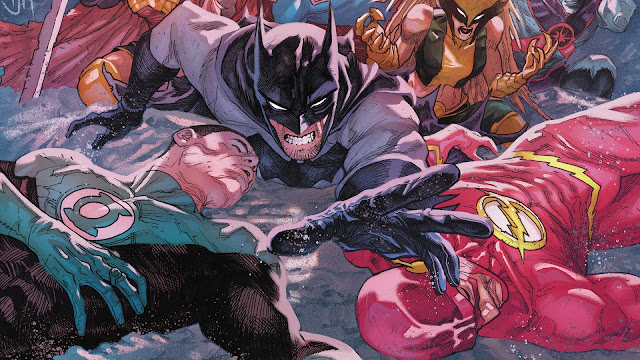 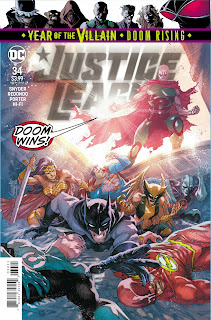 I am so ready for the Justice/Doom War to get things going and that means I want this DCU to change and if that means 5G, Newer New 52, or Rebirthier Rebirth, I am so in.  I have been enjoying this Justice League book but seeing a bit of an escape plan here with Perpetua and the 6th Dimension stuff, I have hope, even if it's just a sliver.  So, what went on in this issue, and was it any good?  Let's find out...

The last issue ended with a lot of stuff coming to a head and we jump right back into it here...starting with 1941.  Cheetah is ordering Poseidon to destroy Atlantis, John Stewart goes 100% against the rules of time travel (it's Hyper-Time here anyway) by telling Vandal Savage everything about the future except the 20 straight times the Phillies win the World Series (It's my Hyper-Time now, dammit!), but it works in the end and Vandal agrees to help them. 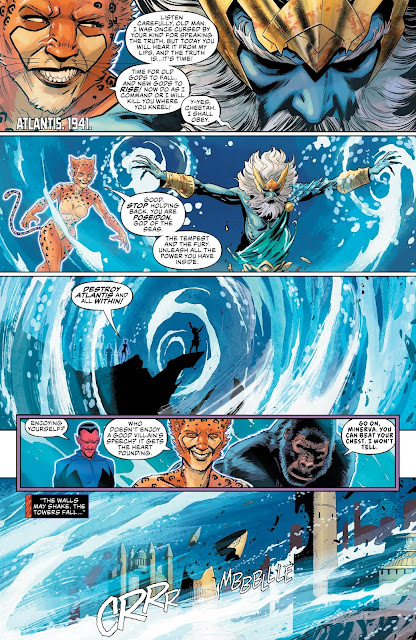 We then shoot off to the future and it looks like Brainiac One Million is about to destroy everything until...a ton of heroes come flying in led by the Last Boy of Earth!  He did good by gathering so many heroes and I will admit, I actually smiled seeing him so happy to get the job done.

We go through multiple full-page spreads from here to the present and then back in 1941 and while the future looks bright ( I gotta wear shades?), the present may look up for grabs, but you just know that Luthor and Perpetua aren't going down this easily.

As for the here and now...and before...and later...the Starmen of the past, present, and future link-up and for once, Luthor and Perpetua actually look scared.  As all of the heroes all attempt to get to the present and kick some ass, it really looked like they would finally get a win for once... 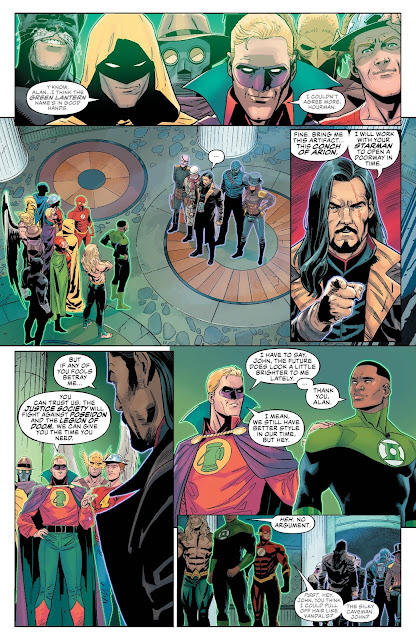 I know it's a spoiler, but this story is not over yet.  We get to see a bunch of the villains from the Year of the Villain which was kinda cool and then the thing that the good guys were trying so desperately to stop happens.  And then things get even worse!  And then they get downright awful!  It looks like the Justice League(s) and all their friends have an uphill battle if they are going to win this one...but hey, what's new.

A lot goes on in this issue and while we have had set up for most, if not all of it, the whole issue still felt a little forced and rushed.  I loved the art which is no surprise since two of my favorite artists are on this one, and we are moving onto the next phase of the story, but it felt like that was only because we had spent so much time getting here and not because the story was 100% ready to go.  One down issue won't make me jump off the Justice League wagon, but it was still disappointing.

Snyder and Tynion move the story into the next phase this week, but it didn't feel like it was totally ready for it.  Maybe it was me who wasn't ready, but I felt like a needed a bit more information from all the time periods and would have liked to hang just an issue or two more to get it.  The art was great throughout and the ending was certainly big, and even if I wasn't fully on board here, I will be back in two weeks expecting it all to get right back to form...not that that will help our heroes!  Seriously, they are in big trouble!