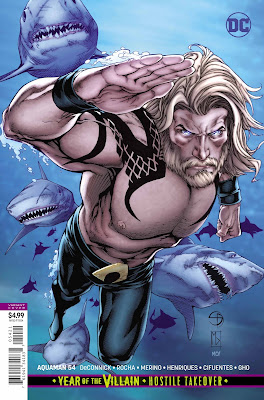 Black Mantamech has rocked Amnesty Bay and now there’s a Legion of Doom symbol in the sky where the lighthouse used to be! Let’s dive back into the deep and read my review of Aquaman #54, right here!

Life is like a box of chocolates, and that box of chocolates is like the ocean. See, all the chocolates are like the dumb little fish that populate the waterways of the world, each uniquely stupid unto its own kind. And then you pee in that box. Like the ocean, a box of chocolates is made up of 80% human urine! Okay, so I might not be great at making metaphors, nor do I know any facts about the world’s oceans. But you know who does? Black Manta’s dad. Why, he used to impart all kinds of facts about the sea to his son, like it’s okay to steal anything that’s underwater. Also, he has the same contempt for human tears that he does for salty sea water. These were important tips that helped shape Black Manta’s view of Atlantis and anything related to water as being targets for his giant mech-suits missiles. 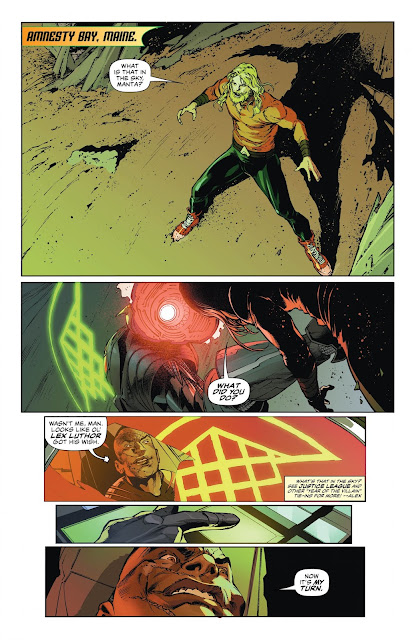 But wait, isn’t that Black Manta’s dad acting as the Artificial Intelligence of his mech-suit for no discernible reason? Yes, but B. Manta toned down his fatherness a couple of issues ago. Still, because this book is idiotic, the mech-suit’s A.I. appears to be startled by Black Manta’s son, Jackson—clearly having a grandson is new to him. Only he doesn’t have a grandson. Black Manta’s father is dead and his personality is being used for A.I. It’s not like his soul has possessed this robot. 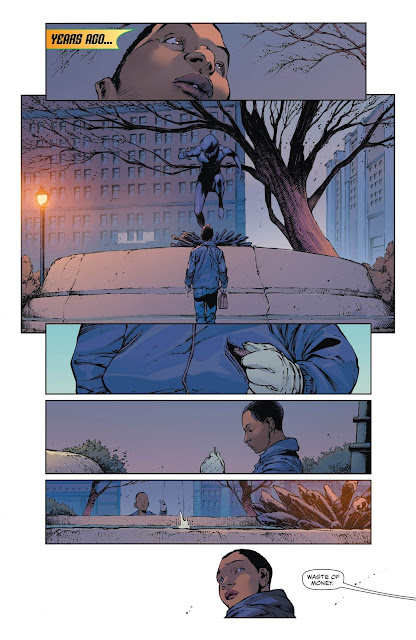 So anyway, Black Manta shoots the hell out of Aquaman, and then Jackson and Mera react by yelling. Maurer then squeezes into the frame and unleashes a C’thulu monster, This appears to be an actual task for the mech-suit to deal with, while Aquaman floats in the churning water in the foreground of the final page. Nice scene. Great artwork throughout, really. But this story was a perfunctory unleashing of several concepts introduced to Aquaman over the last few months. How much you wanna bet the Elder Ocean Gods are going to deliver a final blow soon? 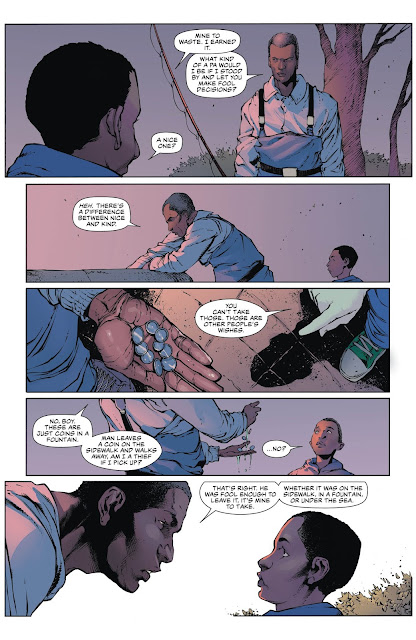 Two things really annoyed me about this issue. For one thing, Maurer didn’t get named at any time. But worse, there’s a caption on the first page that, referring to the Legion of Doom laser light show that’s showed up in several Year of the Villain issues, suggests that the reader check out a bunch of Year of the Villain issues to find out what’s going on. No, dickhead, you tell me what issue will explain the thing. If I have to slog through twenty-plus dollars of other books to figure out what’s happening, I’d rather not know. This is sheer editorial laziness, and indicative of so many gaffes we have seen in DC Comics’ books in the last year. It really feels like a company on its last creative legs. 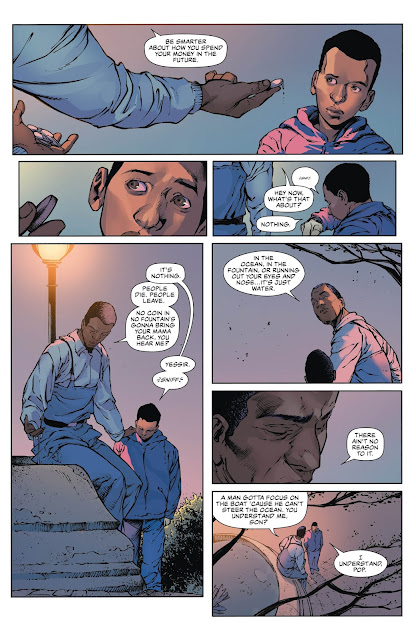 A by-the-numbers doling out of story elements accrued in the last four issues, to create a very contrived cliffhanger that you could probably guess in three tries. Give it a shot! Save yourself the four bucks for this visually impressive comic book.