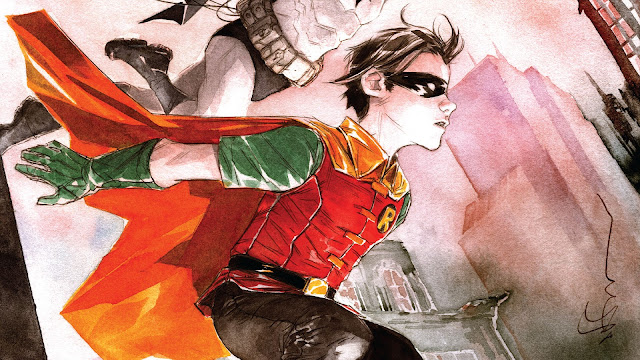 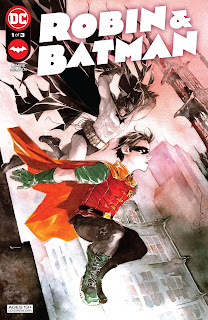 Robin & Batman #1 focuses on a period in the Batman canon where Dick Grayson is on the cusp of assuming his identity as Robin. Is he ready? Does Batman think he's ready?

I'm not sure I know where to begin with this review. This first issue is probably the best and most quintessentially classic take on the Dynamic Duo I've read in years. I don't praise easy, especially for the Big 2, so if Lemire is getting the big thumbs up, that's because it's earned.

To clarify the opening blurb, this is a family drama mixing the mentor/mentee dynamic with the father/son dynamic. Primarily focused on Dick Grayson just before he assumes the identity of Robin, Lemire plays him perfectly as a headstrong, enthusiastic kid who has something to prove to himself and to the man he looks up to. Dick is stubborn and a little overconfident in his abilities, and that overconfidence gets him into hot water on the very mean streets of Gotham more than once. 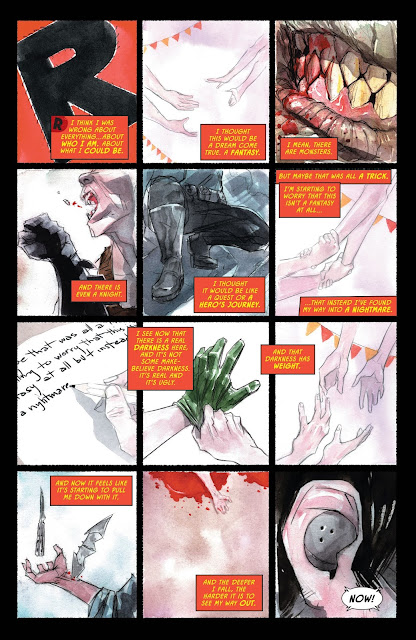 Conversely, Batman is also stubborn but conservative enough not to want to put Dick in harm's way too early. It's engaging push-pull energy where you can see multiple sides to their head butting, further enhanced by Alfred's sage, if not always welcome, advice to Batman. Batman continually walks the line between a protective father figure and a hard-nosed drill sergeant who won't let a soldier on the battlefield until he's ready. You can't help but wonder if Dick's not prepared or if Batman isn't prepared to let Dick be ready. This is complex, authentic, and very relatable writing.

This isn't some YA slice-of-life comic with a thin coat of Batman paint on it. Instead, a proper Batman story is interweaved among the complex emotions where the duo tracks a gang of thieves whose heists lead them to one of Batman's most dangerous villains. A villain who has a connection to Dick in a super obvious way that makes you wonder why nobody thought of it before (or maybe they have, and I missed it in the 75 other Batman titles DC puts out monthly). 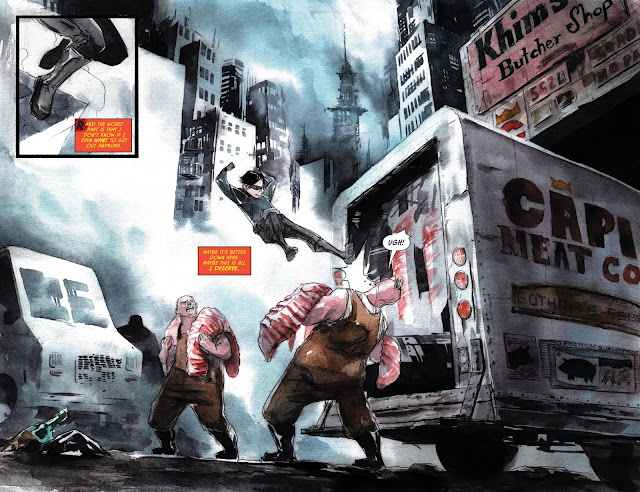 Among our reviewer colleagues, I've heard some hesitation about Dustin Nguyen's art based on the cover. However, the cover art is consistent with the art quality on the internal pages, and it suits the material perfectly. The soft watercolor palettes do not detract from Gotham's edge in the least. Nguyen does a great job of juxtaposing simple camera angles during the quiet moments contrasted with big, dizzying panels during the action scenes to elicit ebb-and-flow energy as the story progresses. This issue looks as good as it reads.

Robin & Batman #1 is a near-perfect coming-of-age story about the moment when Dick Grayson transitions from Bruce Wayne's ward to Robin. The human elements and emotional complexities are spot-on and believable for the foster relationship between Dick and Bruce, and the comic interweaves the family drama aspects seamlessly into a proper Batman detective story. This is one of the best Batman-family comics I've read in years.