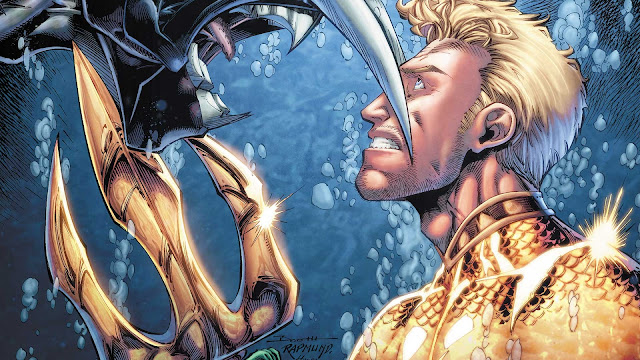 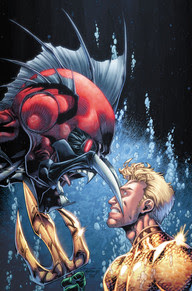 It's time for the King of Atlantis to end his tenure in the New 52/DCYou before everything changes........ or doesn't change at all in Rebirth.  Details are still a little sketchy to me about what's going to happen after that 80 page Rebirth prologue.  Anyway, we're looking at Aquaman and what's going on right now and last we saw of our fish talking friend is that he was going after Scavenger to find out what his involvement was in turning Jonah Payne into the demonic looking Dead Water......... and something about rage water........ that's still a little vague too.  Hopefully Aquaman can get his answers and hopefully Mera can take down Dead Water now that he's broken out of his SpinDrift containment.  Let's jump into this issue and see what's what.  Let's check it out.

Our issue begins with Scavenger having some strange sounding dialog, all about how he's been making sure that he's ready for the next time Aquaman comes a callin', but this is Aquaman we're talking about and even though people like to make fun of his power-set, dude's strong as hell and there really isn't any amount of armor that will keep you safe if you go and piss him off........ the way that Scavenger does here.  So yeah, Arthur rips Scavenger out of his power suit and we begin getting the backstory about how Jonah Payne became the monster known as Dead Water....... Punk ass Scavenger.  As we've learned in previous issues, Jonah worked for Scavenger in some shady underwater business and during one such dive in a mini-sub, Jonah and two other shady characters found themselves in some........ otherness.  Yeah, I'm getting sick of this description of this weird water, but that's what the book refers to it as so that's what I'm going with too.  There was one oxygen tank so that someone could make their way back to the surface and apparently Jonah went and killed for it and because of the guilt he felt for his actions and the stress and rage he had in his normal life when it came to his wife and son, this "otherness" somehow turned him into Dead Water. 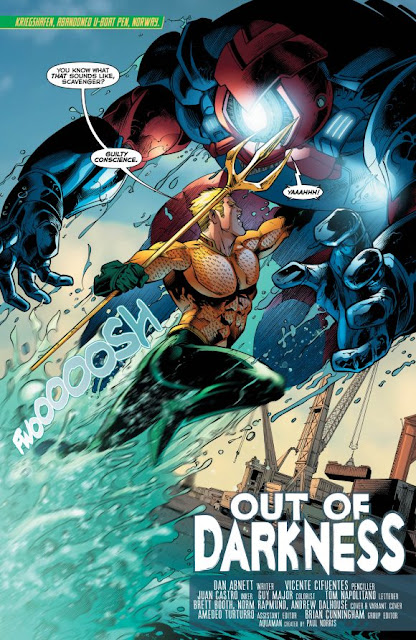 This backstory leads us to Mera taking on Dead Water back at SpinDrift, where I immediately get angry just because I had this whole theory about how Jonah was actually a psychopath himself and was using this demonic rage power to take out people who have wronged him in his life, but that all gets shut down when we find out that Jonah's unruly power is actually brought on by being hydrated like Aquaman thought in the previous issue........... We also see that Dead Water doesn't actually phase through physical attacks like I originally thought when Aquaman fought him previously, but instead converts his body to water, which is a bad move when dealing with Mera, what with her aqua-kinesis.  None of that really comes into play though because Dead Water finds some liquid and teleports away so that he can find the man that helped do this to him....... Scavenger. 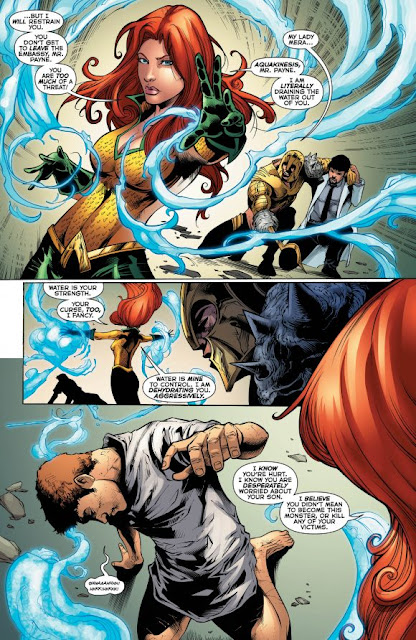 In the end, Dead Water confronts Scavenger and Aquaman and this is hilarious to me because Aquaman gets in front of his enemy to try and save him and is immediately tossed away, where we see Dead Water start chowing down on Peter Mortimer.  Aquaman does get back on his feet before Peter dies though, but our Dead Water story kind of ends on a lackluster note because instead of finding out what's up with this rage water "otherness" and how it could turn someone into a monster, Jonah somehow gets control of his alter ego and plunges himself on Aquaman's trident........... which is odd because for as much as he was concerned about his son in the previous issue and even in this one, he just made him an orphan.

That's it for this issue of Aquaman and like the rest of this story arc........ Well, except for when Dead Water was killing people out of glasses of water and we didn't know who it was, this was kind of lackluster especially in its conclusion and came off kind of boring.  Nothing was really explained, except that my theory about Jonah was wrong and that hydration is what turns him into a monster....... but even that was strange because we didn't get any background on why.  Yeah, he was somehow turned into this from water that can be described as "otherness", but I have no idea what that means and this issue does very little to try and make it known.  It's just a quick wrap up issue before Rebirth and like a lot of other titles that are doing the same thing....... it really makes those issues come off weak as hell.  Luckily though, the boredom that I experienced during this story was for the most part held off because of the awesome art in this book, that truly made Aquaman look like a bad ass..... and maybe a little with Mera, but the story didn't really call for her to do much.  The moral of the story is don't swim angry kids because you never know when there can be some "otherness" out there.

Aquaman #52 quickly wraps up our Dead Water story arc so that we can get into Rebirth next month and because of this quick wrap up, this conclusion comes off really lackluster and just leaves things that readers might have been really interested in....... like me....... lie.  We do have some fantastic art and colors in this book, but besides that, there isn't a lot to get excited about here.