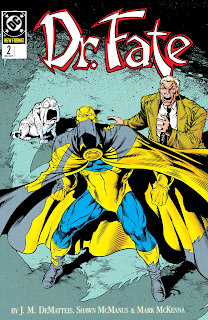 THE NIGHT OF BRAHMA, PART ONE:
SUNSET

Review by Joey Casco of TheWineStalker.net

Kent Nelson is dead but Nabu inhabits Kent's corpse to mentor the new Dr. Fate, Eric Strauss, who was a 10 year old boy aged up to an adult by Nabu. But the catch is that Eric must merge with his stepmother Linda in order to become Fate. Joined by a shapeshifting demon named Petey and a lawyer named Jack Small, Nabu and Eric and Linda must face the Lords of Order and stop them from allowing chaos to win. It's kind of like Shazam meets Firestorm meets Justice League Dark.

Oh, there's also vampires! And the issue opens up with them, narrated by the vampire the last issue closed with.

"The Temple of the Ineffable Tao" has stood here on this hilltop overlooking the sleepy California town of Paloma, for over twenty years, transfusing the blood of the East into the veins of the West. It's a place of seclusion and mystery, this zen monastery; a place where hearts and minds turn inward, reaching for a buried secret, a veiled answer, that the monks who live here claim in beyond words, beyong the mind itself. Once I would have agreed with them. Once I believed in the inherent goodness of man; in salvation as every soul's birthright. Once -- a fool that I was! -- I even held to that most laughable of concepts called God." 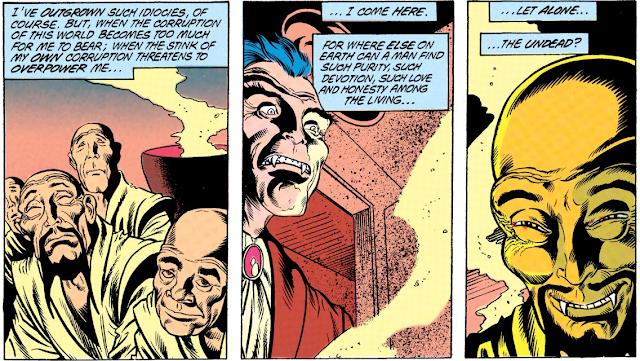 We're then taken to an astral plane where Kent/Nabu is training Eric and Linda, and it's not going to well. Linda is kinda messing things up by taking over control from Eric. Then the doorbell rings, messing up their concentration, and Kent pulls them back to this reality. 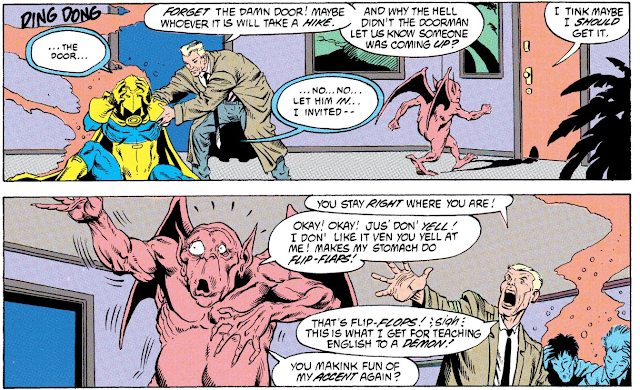 Who is at the door? Why, it's good ol' Jack C. Small. He's a lawyer and a friend of Linda's he's come to visit give some financial advice to Linda. Petey changes into his dog form. 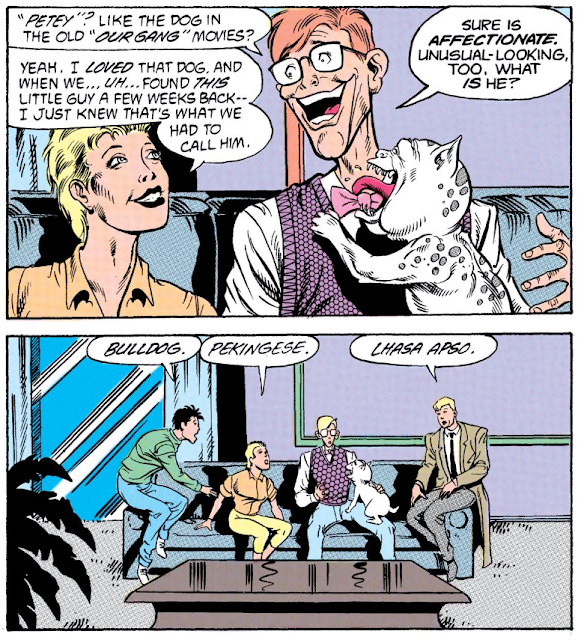 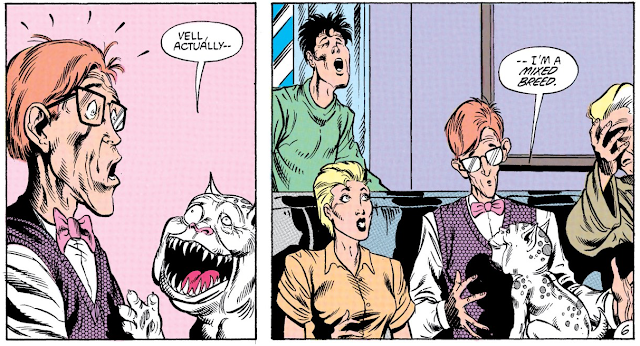 Back at the monastery, we learn that the vampire's name is Andrew Bennett. 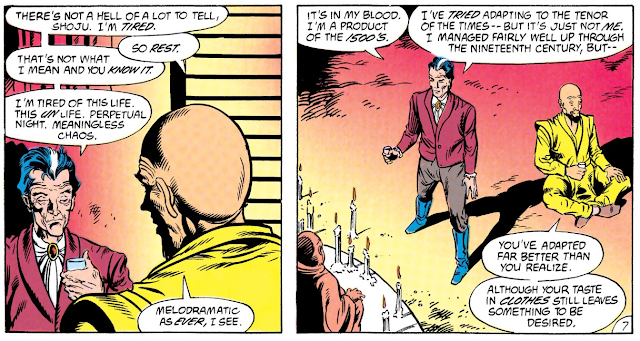 "I want to die" he tells Shoju, to which Shoju responds "So die." But he can't.

We then get Andrew's story. He was a lord and a warrior. One night he left his love for an evening ride and she warned him that something didn't feel right. He laughed at her and went anyways. 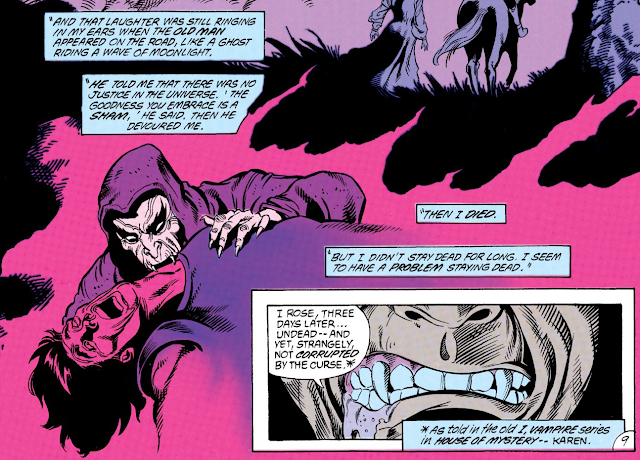 He turned his love into a vampire, and she became the leader of a worldwide organization of vampires called The Blood Red Moon. She was the one who transformed the monks, although they did not join the organization. Andrew hunted her, trying to stop her, and with some mortal friends he was able to kill her and defeat The Blood Red Moon

But in the process Andrew died being exposed to sunlight. The dust that was his body was blown away by the wine, and formed him back together again. Since then he's committed suicide countless times and always comes back to life. 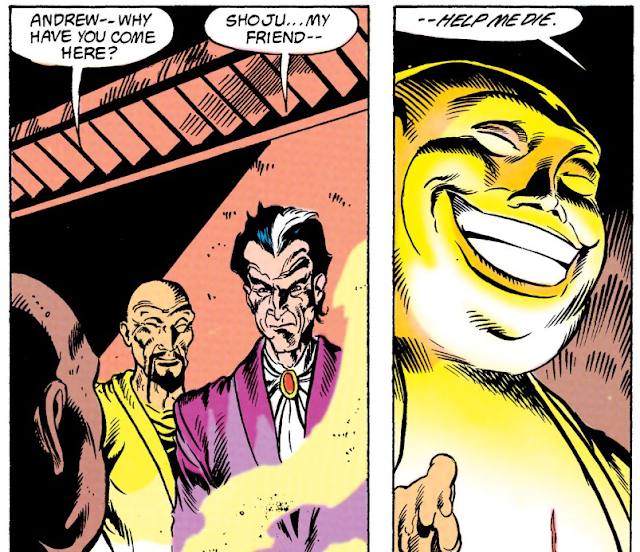 Shoju agrees, and they're all going to do it with him. Andrew insists that they won't because if they all die and he comes back, then he's left on this Earth without them, and they're the only sanity he has left. After some wise words from Shoju, they wait for the sun to rise... and then... 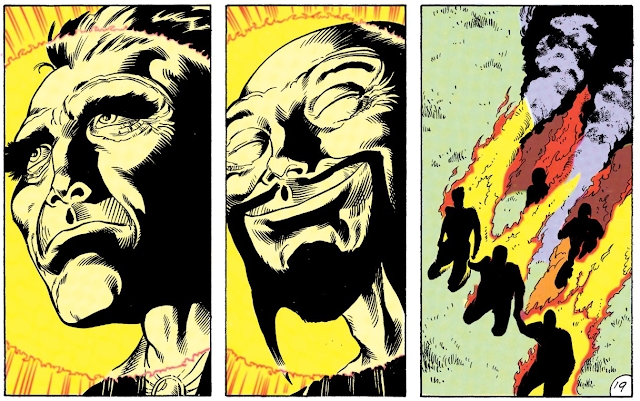 Meanwhile, they're making excuses for why the dog talks. Eric is a ventriloquist, apparently.

But the Lords of Order show up, and this is where it gets reeeeeeeaaaaally wordy and I'm not going to really get in to it because it's late and I want to go to sleep, damnit.

Basically the Lords of Order see no reason to continue fighting chaos and they just want to let it win. Well, the Dr. Fate team ain't having none of that! 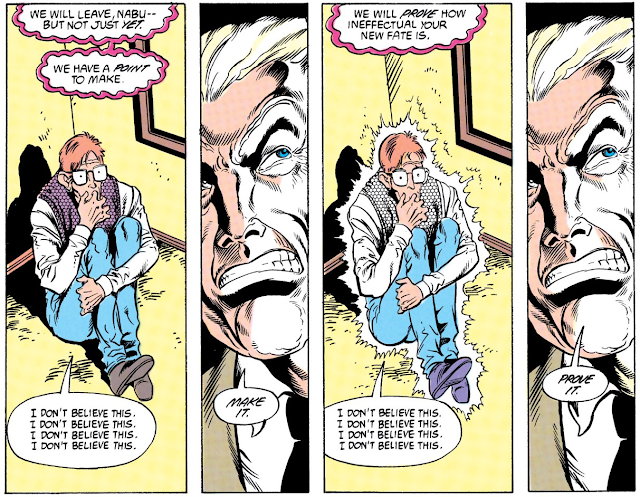 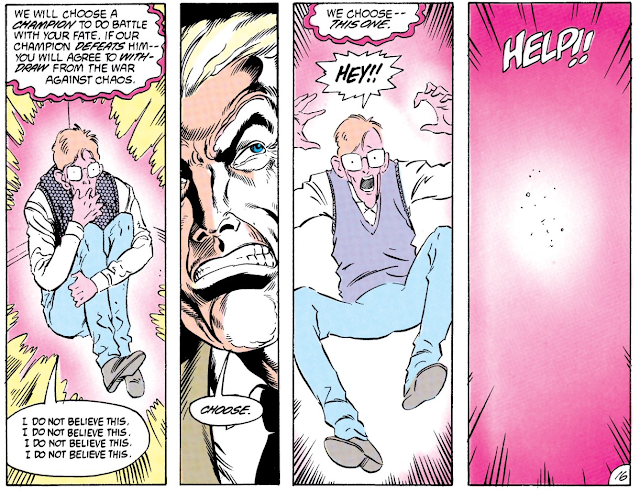 They're all teleported to New Mexico where Dr. Fate must do battle with the Lords' champion... JACK C. SMALL! Who looks a lot different now... 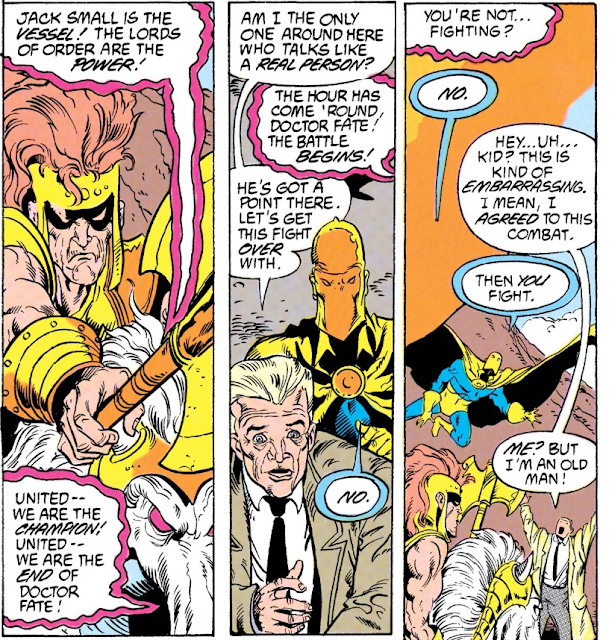 Dr. Fate refuses to fight, saying that even he loses it wouldn't take a difference because they'd just keep fighting and continue to oppose chaos. This confuses the hell out of the Lords of Order and just send them back to the apartment. 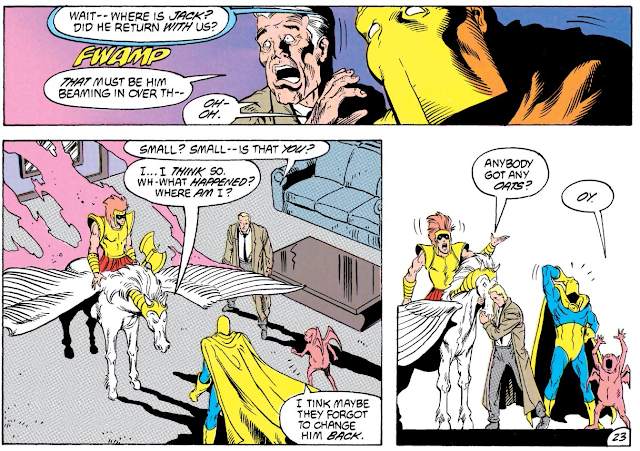 And then the final page... 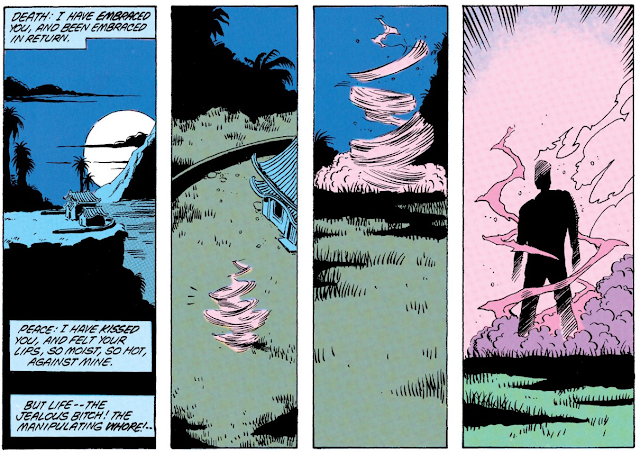 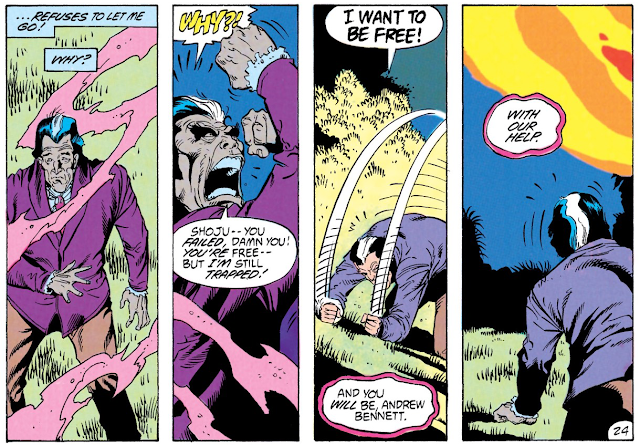 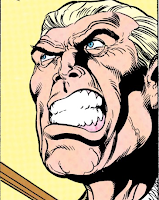 Man, this book is so good. It's got humor, darkness, and sadness. Andrew Bennett really makes you feel bad for him, and I really like this version of Nabu as Kent. I highly suggest you give it a read. Again, the art is awesome except for Eric. I don't get what's going on there. Is he supposed to look like a strung out junkie all the time?