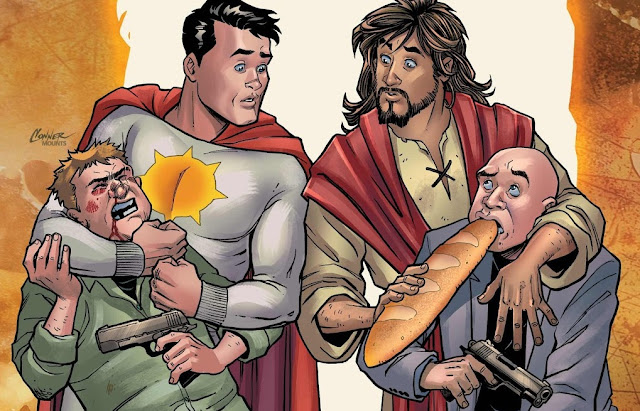 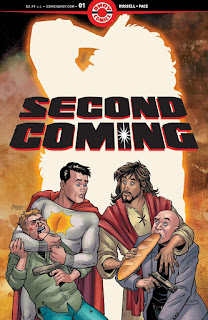 God commands Earth's mightiest superhero, Sunstar, to accept Jesus as his roommate and teach him how to use his power in this week’s all-new SECOND COMING #1 by Mark Russell. Jesus, shocked at the way humans have twisted his message, seeks to straighten them out. Let’s take a “leap of faith” into the first issue!

I will start by saying to Mark Russell, Ahoy Comics, and to everyone involved in making what some are viewing as a “blasphemous” comic that will result in “career suicide” that this comic was amazing!  This issue was authentic and unique while offering a lively and hysterical take on Christianity in a way that will get readers to organically think critically about their own faith through a comic.... A COMIC!!! Mark Russell is genuinely bringing Jesus to an audience that may not normally consider going to church or discovering their own religious belief. And again, Russell is developing these spiritual thoughts through A COMIC!!

Russell isn’t demanding anyone to believe in Christianity nor is he saying that this is definitively what went down over two millennia ago. His goal is simply to shed some light on the world in a cleverly ecclesiastical way that should make everyone ponder their own religious views and possibly take a faith journey of their own in the process. 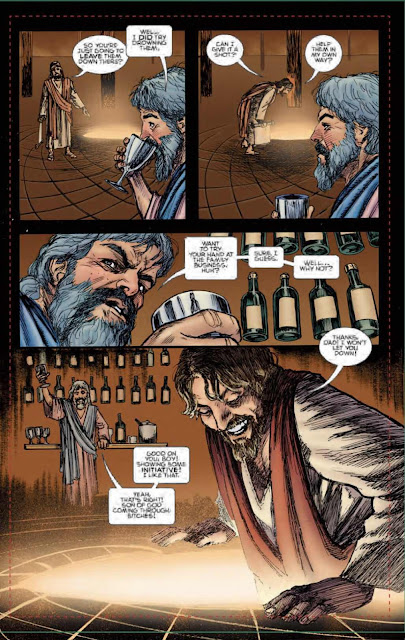 Russell’s humor throughout the entire issue was totally on point and set a hysterical mood throughout the entire read. From the subtle fruit on the tree in the garden shaped like genitalia to God saying “That’s right bitches! Son of God coming through!”, Russell couldn’t stop making this reviewer chuckle after every remark or action from our Father in Heaven. The dialogue was certainly out of character from what many “believe” the Almighty would be like, however, that’s the point.

No one actually knows how God is like and the closest account to God is The Bible, which everyone must read with their own interpretation. This is simply Russell’s satirical look at the biblical story and the creator of the universe. Sure, Russell portrays God as an egotistical prick on a power trip. However, this reviewer would start by again reiterating that this is supposed to be a comedic tale. Furthermore, what father or parent hasn’t been on an ego trip at least once to their kids?

Russell made God the star of the issue. From God joking about Heavenly mix-ups to Him breaking into Sunstars bedroom in the middle of having sex, Russell makes God so ridiculously funny and sarcastic that he actually becomes relatable. When was the last time ANYONE could say that the Almighty Father in Heaven was relatable?

As much as the first two-thirds of the issue focused on God “The Rockstar”, the last one third focused on Jesus and gave some very powerful discernment of the character of our Savior. This reviewer enjoyed the in-depth analyzes from Jesus explaining why he was raised as a human so he could feel their pain and be like them to experience, learn, and grow like God’s creation. However, the best part of the entire story was the wrap around from the beginning to the end.

The story opened with Jesus’s friend Shimon who grew to be an amazing carpenter that readers find out actually created crucifixes for the Romans. Shimon became shunned by his people and viewed as a traitor. Eventually, Shimon got to see his own adopted brother Jesus crucified by what he made. However, Russell writes our hero beautifully.  Jesus forgave Shimon and proceeds to explain the purpose of life to Sunstar in a poetically charged way. Jesus says that “the world will be saved with one act of forgiveness at a time.”  The world will not be saved by punishing those who do us harm or by inflicting more evil in order to wipe out the prior evil. That’s what got humanity in this predicament in the first place.

As Russell points out in his notes after the issue, his purpose for the comic was to show people the empathy and forgiveness that Jesus showed to everyone and how this was the way to move forward. Just like the Book of Job provides profound insight into the suffering and circumstances of a man that appears to do no wrong, Jesus tries to explain at the end of the issue, with the best of His ability to Sunstar, why Jesus left the bad guys to escape and healed them. “The world isn’t saved by violence, or bribery, or power. It’s saved by being brave enough to not be intimated.” This was one of the many lessons learned in the Book of Job, which was from the Old Testament before Jesus and continues to be useful thousands of years later. This was simply Russell providing readers with some spiritual insight that’s been around for millennia and is still equally as important as it was before. The real question we should be asking is why do we always result in violence, bribery, and intimation even when we know the other way is better? 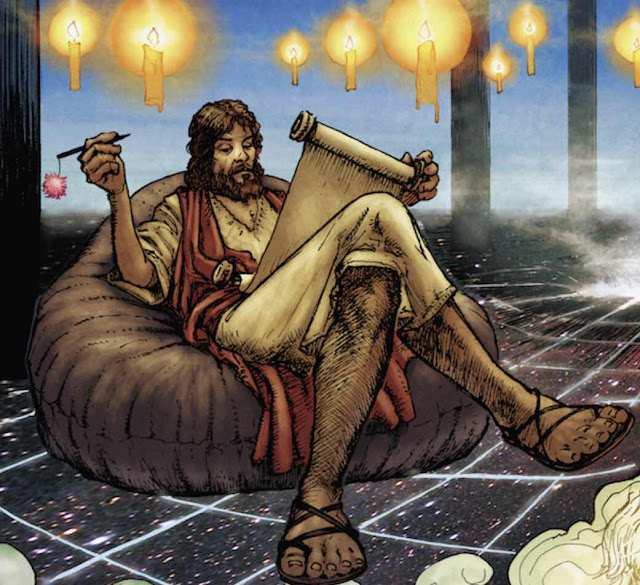 In conclusion, let me leave you with a final thought. A comedy is “a play characterized by its humorous or satirical tone and its depiction of amusing people or incidents, in which the characters ultimately triumph over adversity.” Many view the Biblical Gospels as a tragedy, which they certainly are, however, this reviewer would argue, just like Russell is profoundly saying throughout this issue, that the Gospels are also a comedy about a man triumphing over evil itself. This reviewer argues that there is no better way to continue this Biblical tale and spread the word of Christianity than through a comedy. Additionally, who better to do that than the cleverly witty Mark Russell?

If you love biblical or religious based comics, this is for you. If you love Mark Russell’s witty reflections of the many issues impacting the world today, you’ll adore this issue. If you’re willing to take a risk on something new that’s not from one of the main two colossal companies, I highly recommend this issue and jumping into this series. If you found out about this comic and are new to this world of media, it’s a great issue to draw you in and hopefully get you hooked at some of the thousands of other comics out there for you that have some amazing stories to tell. And finally, if you’ve never read anything other than Marvel or DC, I highly recommend you pick this issue up and add this series to your pull list. It’s not too often you’ll have an opportunity to take a faith quest and laugh out loud at the same time.