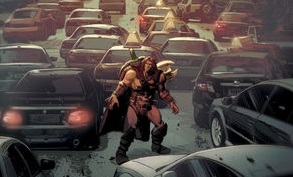 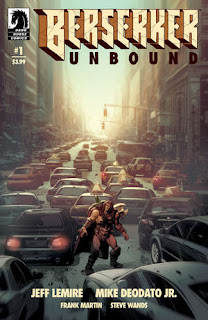 A merciless sword and sorcery warrior finds himself blasted through a wormhole to a modern-day metropolis in this week’s all-new BERSERKER UNBOUND #1 by Jeff Lemire. Let’s dive in and see how this new series kicks off!

Within the past year, I have developed a fascination with the Hyborian Cimmerian named Conan the Barbarian reading almost everything in sight. From SAVAGE SWORD OF CONAN to SAVAGE AVENGERS, the adventures of Conan have been fierce, spellbinding, ruthless, and cold-blooded. So, the big question this reviewer had before going into the issue was, how similar is BERSERKER UNBOUND to CONAN THE BARBARIAN? Simply looking at the character, any reader can see the similarities. Additionally, at DC, Jeff Lemire recently kicked off a book that was frighteningly close to the FANTASTIC FOUR called THE TERRIFIC. Therefore, is Lemire at it again?

Well, the issue started off rather similar to a certain Cimmerian we may know. A barbarian named the Mongrel King wanders the desert only to eventually find his wife and daughter slain. Sure, it’s not identical to Conan but the main characters dress, attire, and mannerisms “could” certainly portray the Mongrel King as the red-headed stepbrother of the Cimmerian we’ve all known and loved. However, there were some unique differences too. Conan would wander civilization searching for treasure, sorcerers, barmaids, and princesses. However, the Mongrel King had already settled down, had a family, and wandered the land for no apparent reason this reviewer could tell. 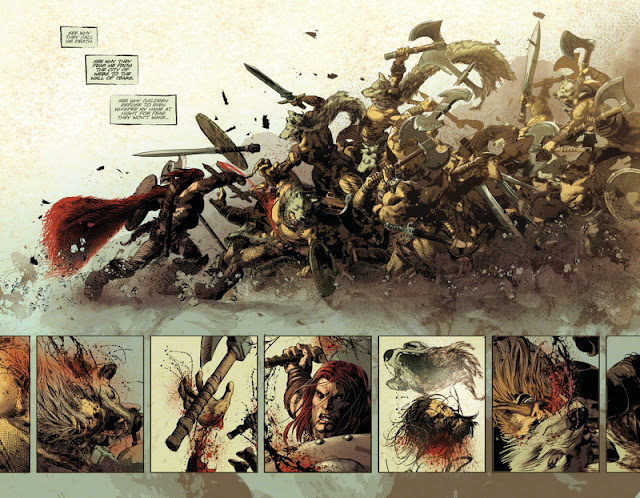 Conan was at times a pirate, a thief, a warrior, and eventually a King. The Mongrel King was a warrior and “possibly” working his way towards being a King or head of his tribe. His title made it unclear and readers can only speculate if the main character was actually a King. For example, why would an actual King aimless walk the wilderness alone if he was truly King? Wouldn’t he have men with him?
Likewise, Conan‘s adventures often showed the honor and heroism the Barbarian has where we actually see the Mongrel King run away and call himself a coward after finding his wife and daughter slain. Sure, the Mongrel King goes berserk and cuts a swath through part of the clan that took his family. However, after taking a vicious wound to his side, he flees out of fear and somehow teleports to what appears to be present-day (or at least the future). 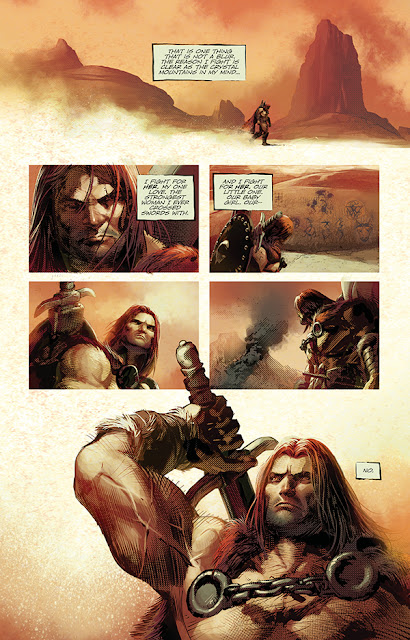 Now, as much as this story had its similarities to a certain Marvel Mag, the art was truly the highlight of this book. Mike Deodato’s art is masterful and Frank Martin’s colors instantly portray a mood that transports readers immediately into the comic.

Each scene and panel are strategically placed guiding readers through the emotions of the Mongrel King and do a fantastic job of telling the story in multiple parts when no dialogue or narration appears. Deodato’s facial expressions, as well as the muddy backgrounds, fit so well with the premise of the issue and drive the emotions of the Great Berserker throughout the story. The sheer destruction is amplified by this art team and each action sequence was so dynamic that I left the issue stunned and paging back through the comic just to look at the issue again. Deodato and Martin’s art is truly the bright spot in a comic that appeared eerily identical to a certain Cimmerian.

Ultimately, Lemire’s take on a Savage Barbarian is pretty good. The Great Berserker appears mighty, deadly, hulking, and not to be trifled with. However, the biggest take always that was disappointing to me was the attempts at ancient/primitive language surrounded by the barbarian dropping the f-bomb throughout the issue. I was continually thrown out of the issue wondering why a barbarian could seem so crude yet throw around f$&@er in the middle of a battle.

The language was out of place and out of touch for any primitive culture. Additionally, why was this Great Berserker running? The narration made it seem like the main character didn’t truly know why.  How could someone so powerful be stricken with so much fear suddenly? He couldn’t have been nicknamed with those amazing titles by running from battle? 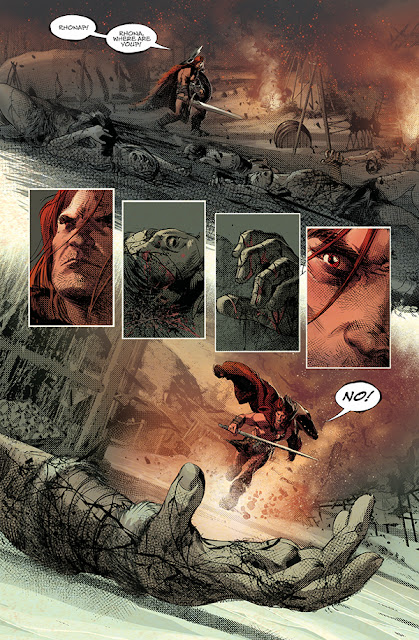 Maybe it’s my fault for diving into the issue and expecting Transformers but receiving Go-Bots instead. The issue itself isn’t bad it’s just the similarities between Conan, his appearance, the types of weapons he uses, how he fights, even the narration all point the Mongrel King towards a Conan-like figure. Maybe it wasn’t Lemire’s intent but I couldn’t stop comparing the two characters. However, maybe that’s the point and direction Lemire wants readers to take? Maybe it’s meant to be a riff or spoof?

Furthermore, I know many will say that BERSERKER UNBOUND will mostly take place in the present day, which should make it different than Conan right? Well, if you’re reading Conan now at all, readers would see he’s currently in the Savage Land, which is present-day Marvel. Plus, Conan was also in AVENGERS: NO ROAD HOME. So again, a time/dimension/wormhole traveling barbarian has also recently happened. So, for multiple reasons, I couldn’t help but compare the two titles and characters.

This series seems like a great idea on the outside and I would recommend it to anyone not reading a Conan series right now. I would also recommend it to anyone interested in dipping their toe into a series featuring a barbarian-like character. However, it’s strikingly similar to a Cimmerian we all know and love and I will just continue to read that right now unless something changes quickly in the next issue that really grabs my attention. There is certainly potential for something really great in this issue and series. However, my hope is Lemire can quickly find his own direction and steer clear of the Conan comparison fast before it’s too late.