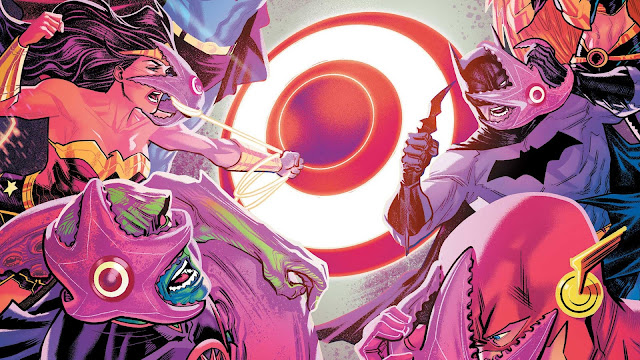 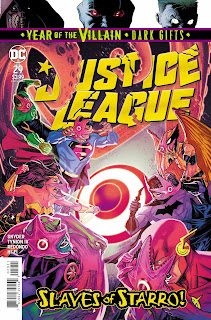 Does a Starro dream of an electric Justice League? Sensing the danger to come, Jarro fears for his newfound friends. He ponders each one and their potential fate to decide whether he should mentally block them from going forward into what could be certain destruction...the coming war with the Legion of Doom!


The issue begins with a little history lesson of 0-World and Star-0.  I love Jarro and it's cool for Snyder and Tynion to remind people how badass a villain he actually was, but this part felt more like a lecture than a fun walk down memory lane.  Maybe it's because it is all through narration, but by the end, it ends with a punchline that throws it all off anyway.  It came off as a joke...but not really a joke...but kind of a joke. 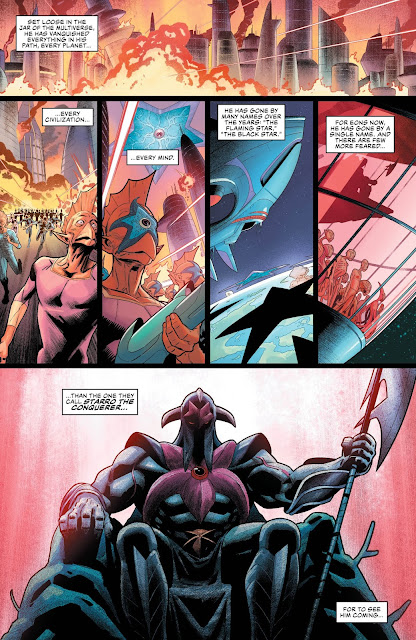 The big thing here, however, is Jarro has found the Legion of Doom and actually takes the fight to Lex and Company.  Still, the way the opening ended, I was left with a nagging feeling that what we were seeing was not real...and that did kind of mess up the ending for me.  Still, Jarro is the star(fish) of the show here and he really does kick ass!  So does Bruno Redondo on art, by the way.  Everything looks great, especially the Legion of Doom and their sexy leader Lex.

While Jarro takes it to Doom, we get a couple of pages that again feel more like a lecture than the fun comic stuff surrounding it.  It's yet another rundown of the Forces and Perpetua and instead of finally explaining what we've already gotten, we get more mysteries piled high on top.  Maybe I'm a dummy, but if a new reader asked me (and believe me, a ton have) to explain the Ultraviolet Spectrum, or the Still Force or even Perpetua, I really wouldn't be able to help.  I keep telling people to be patient and Snyder and Tynion will eventually get to it...but here we are.  By now, I need to be able to give a solid sentence or two that is easy to grasp by anyone and I just can't.  That really hurts when the big picture relies on that.  Now we get the Void Wind, the Sixth Note and more?  I really think Snyder and Tynion need to dial it all back a little, get us all on the same page and then keep kicking butt. 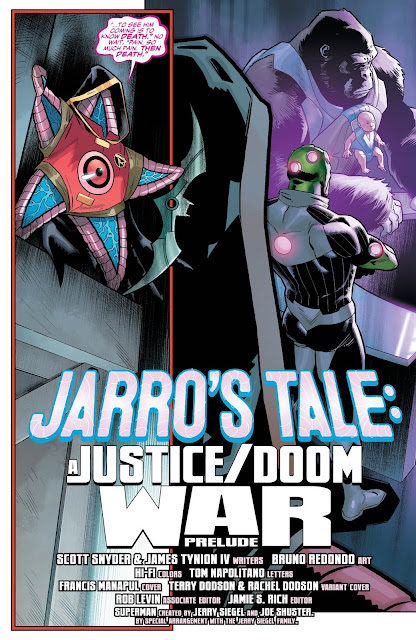 You see, even with that huge complaint, I am still enjoying this book.  The moments with Jarro here are great and the bit with Batman and him was outstanding.  I mean, who would have guessed that the best personal moments with Batman and Robin of the past couple years would be with a starfish?

The issue then ends with a cliffhanger that once again shows that Lex is one step ahead of everyone and things are going to get a lot worse before they get better.

This issue is a combination of great (Jarro!) and frustrating.  There are some huge moments, but they are lessened a bit by a lack of information.  Still, it all looks great and Jarro is just so much fun.