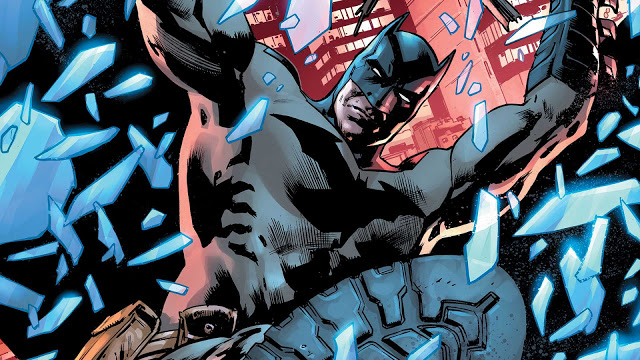 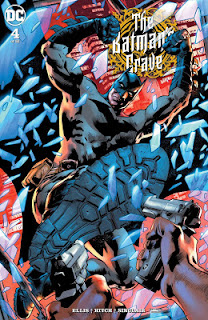 Batman's Grave in the three issues out so far has mostly settled into a bit of a pattern. We get provided minimal clues to what's occurring, Batman goes to fight someone for the most of the issue, then Alfred and Bruce exchange semi-clever barbs back and forth, which also at times go way over my head.  So will any of that 'formulaic' sense to the series change at all here as we near a conclusion to the first arc? NOPE, but let's discuss anyway.


The issue begins Batman suiting up, traveling along in his very sharp Batmobile, and then scouting his location, the Hellfem residence, via drone for his next lead on this mystery quest. After conferring with Alfred regarding who's inside, we discover it's Dr. Hellfem and three other guests, Bats cuts the lights and attacks, finding himself in a fight for his life that once again fills the majority of the issue.  This is not a joke when I mention how the action just goes on and on. This individual fight scene, once again mostly dialogue-free, takes up a whopping 16 pages of this book! Is it great to look at yes, but I'm not sure what story I'm supposed to be following here anymore, aside of course Batman fighting random thugs. 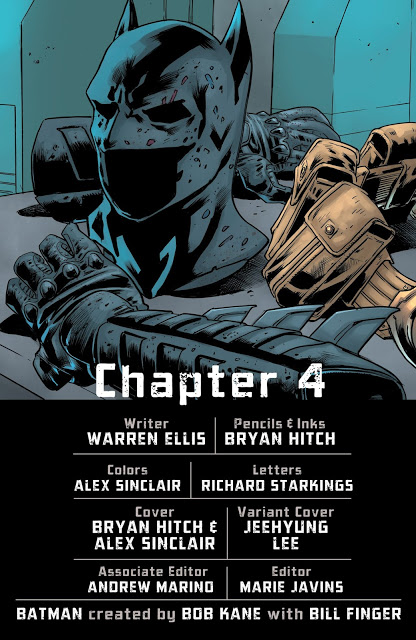 Thankfully once again Bryan Hitch is up to the task of drawing beautifully rendered fight scenes from all angles. Here Batman takes on three goons of Hellfam's at once; the Bane ripoff from the last issue, a burn victim that won't let you forget he can't feel pain, and a knife-wielding tough guy all at once.  While all the scenes throughout the entire book look great, the fight is especially easy to follow, with blocks and punches reaching a logical conclusion the next panel, which I really appreciate when an artist is able to showcase what's occurring on the page like I'm following an action movie frame by frame. There's not per se a downside when an artist is afforded this much space to make things like this work, but when it happens every single issue, I get the point and need more from the writer's script at hand. 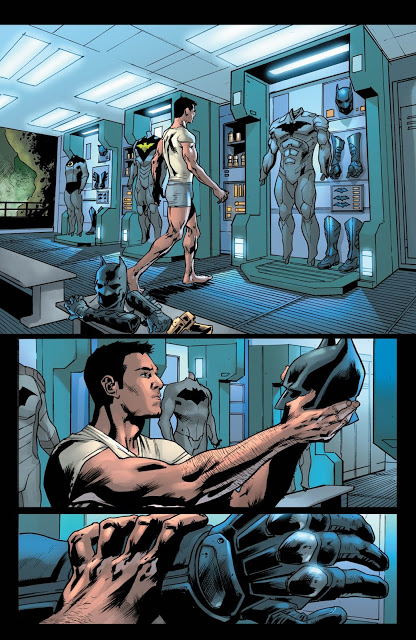 The issue concludes with Batman finally reaching Dr. Hellfam, who then promptly commits suicide via injection cocktail, saying the next to nothing before he goes, and then we're back off to the 'Cave' once again for more of Alfred's classic British humor. The End, not quite the cliffhanger I was hoping for there. 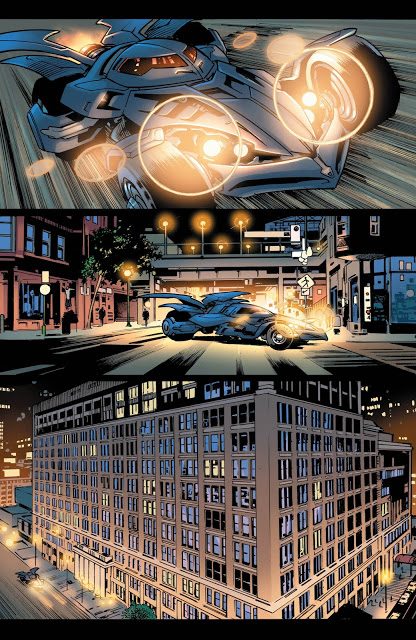 Overall, this book is basically a well-done artist showcase, because once again its bare-bones minimal dialogue approach make any story points or names for that matter just very hard to recall or remember, and the beautiful art is clearly carrying this limping book across the finish line.

I'm still not sure what the entire purpose of this series even is yet, outside Batman still attempting to solve a couple random murders, but what makes these special, and why should I care? Four issues in and the creative team have still not established much at all which is a huge problem for me.  Art aside, there are just many better options on the stands currently to try out than to keep hoping for better here based on reputation alone.