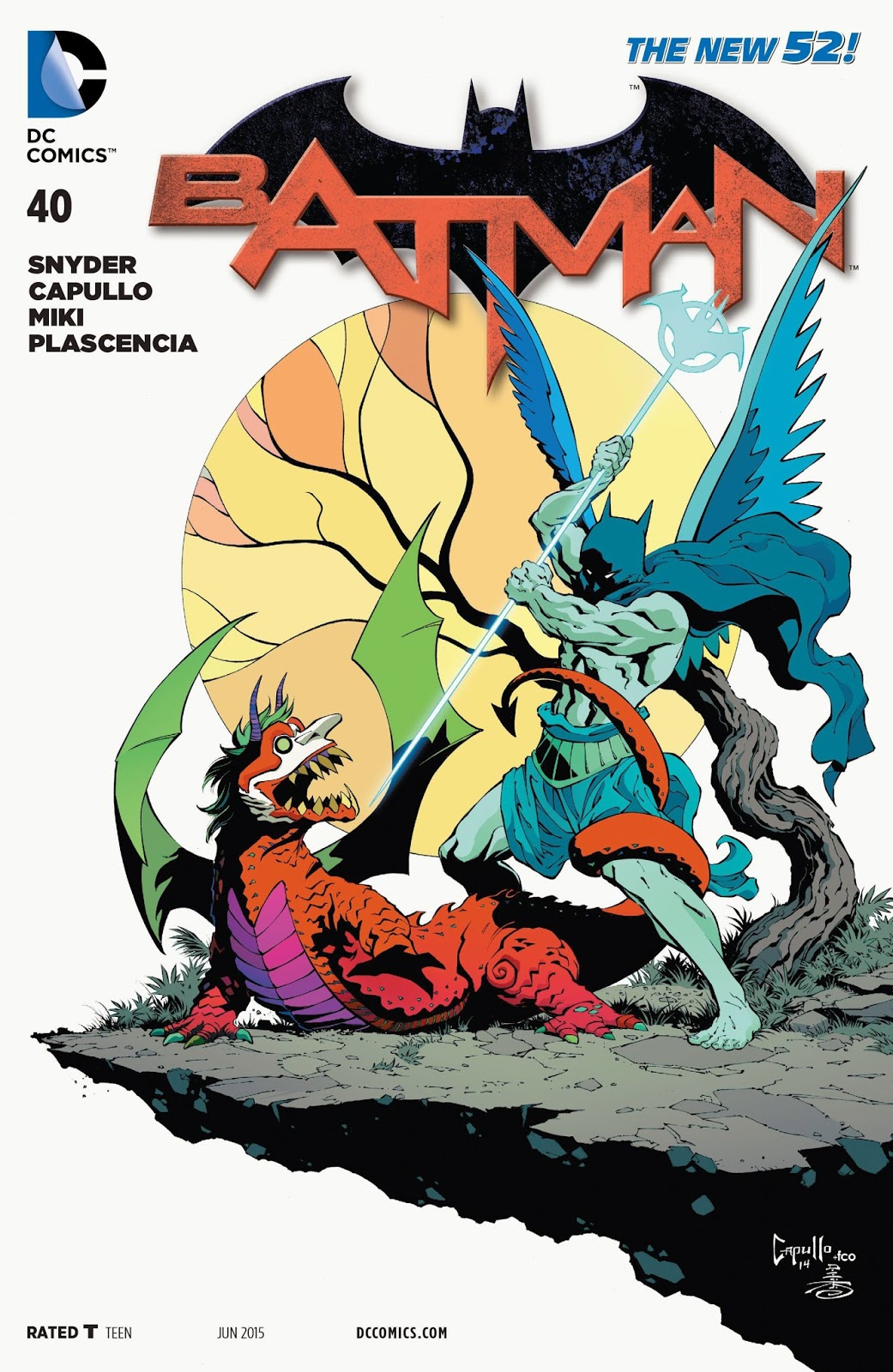 
Scott Snyder's Endgame has been a lot of things...confusing, exciting, dense and well, awesome.  It's one of those stories that is bound to be combed over for years and sits right next to the Court of the Owls and Death of the Family as the best stories the New 52 has given readers.  It's now another thing...over.  Or is it?  That's the thing with Scott Snyder.  The guy's stories have more layers than a freakin' onion and you never are truly on solid ground when trying to figure it all out.  I've read it a couple times now and I'm still not sure I'm ready to fully review it.  I will, however, but I beg everyone reading this to read the issue first.  I'm going to try not to spoil things, but I'll tell you this right off the bat...this issue is one of the most important issues DC has put out in a long, long time and it will change the landscape of the DCU for the foreseeable future.  Trust me. Go buy this issue, read it and come on back to see if you agree with me.  Okay?  Let's take a deep breath and dive on in.

The book begins with a little personal Batman/Joker history lesson that I'm sure every reader knows, but this time it's from a little different perspective.  The little twist makes it seem otherwordly and ominous, but it is quickly engulfed in the complete chaos of the awesome Gotham teamup that is part Suicide Squad, part a fanboys dream come true.

The Bat Family and the Gotham Rogues fighting side by side with Batman was what I was looking forward to the most after last issue and while it doesn't disappoint, I wish it lasted longer.  I would say that Bane tossing Batman through the air to confront the Joker was the highlight (and a nice hero turn for the villain who "broke the bat"), but then I'd be forgetting the huge twist that ended this scene,  Again, I don't want to spoil things, but when I said the Bat Family was fighting, I meant the whole Bat Family.  Even my favorite member who may or may not be a spy.  It turns out that the battle was only a distraction for Batman's real fight...against time.

While all this was going on, Batman was underground searching for the Dionesium that can cure Gotham, but also solve the whole immortal Joker conundrum.  He no sooner finds it than Joker shows up and while it seems a bit too quick between scenes, I'll go with it because what follows is breathtaking.  Joker versus Batman for all the cards.

If I told you that this fight is one of the best you've ever witnessed, would you believe me?  If you've read the issue like I told you to do, you would.  It's brutal, bloody, over-the-top and final.  Kudos to both Snyder and Greg Capullo for giving fans the best sequence the New 52 has seen right at it's end. It really has everything...great dialogue, references and edge of your seat tension.  Then it ends.  Finis.  It hit me like a brick wall and at the same time, made so much sense.  I'm not talking in-book sense because of course it did.  I mean the future of the Universe sense.

I can't say enough about this issue without saying too much.  If you've been reading the Endgame story, you will certainly read it whether I say it's good or bad.  If you haven't been reading Endgame, but hear the buzz that's bound to happen, run out and read it from the beginning before too much is spoiled.  If you are crazy and just want to read reviews without reading the story, you will be missing out on one of the best stories in recent memory and one that will have reverberations for years to come.  If you are the later, just stop your evil ways, get off your ass and go buy it.

I can't say enough about the art team of Greg Capullo, Danny Miki and FCO Plascencia.  They are the gold standard of DC Comics and other books should strive to look half as good.  I don't know if they have awards for individual issues, but if they do, I nominate this for Best Art of the Year.  It only makes it that much better that it is in such an important issue.

This issue is beautiful, brutal, bloody, exciting and important.  Important to Batman and the whole DC Universe.  I really shouldn't have to say anymore.  Just go and buy this issue, read it and have your mind blown.