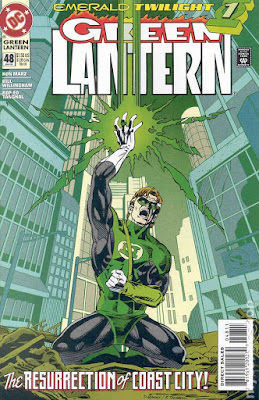 This month, DC will be honoring Green Lantern's 75th anniversary with Green Lantern variant covers. While my articles don't really come with variant covers, most of my articles this month will be Green Lantern themed to honor the anniversary of one of DC's most famous superheroes. What better way to start this little honor fest than with the story of one of the greatest falls for a Lantern...yeah a very weird start, but this was one of the very first Green Lantern stories I ever read!
This is the first issue of the Emerald Twilight story arc, leading to Hal Jordan's fall, and the birth of Kyle Rayner's time as the Green Lantern. This story was set up during the Reign of the Supermen event, which had Cyborg Superman team up with Mongol to destroy Coast City, making way for a way-station to turn the Earth into Warworld. While the station was destroyed, the damage was done; Coast City was destroyed.
It has been years since I first read this, and now it's time to see if it holds up.
We open the book with a Hal Jordan kneeling in agony of the hole that was once Coast City. He looks to his ring as a narrator explains why this was such a huge loss for Hal; how this was the city that created the man he was to this day. He then raises his ring into the sky to create a bubble around the hole, leaving himself inside.

Inside the bubble, he creates apparently a sentient construct of his father. The pair talk, leading Hal to ask his father for his approval. This actually surprised me reading it then and now, as Hal never really seemed like the man who always wanted approval from his father. The pair argue from there, and it

leads to his father leaving to get on the plane that would lead to his demise. While most people would call shenanigans on the supposed sentience of the Father construct and his death, I think its a great way to show how far Hal is gone mentally. He has failed to protect his city, and now is asking the one person whose opinion matters to tell him that its okay.
Things get a bit stranger when his mother appears, and tells him that everything will be okay, and he can move on....except he ignores that and with all the power in his ring, recreates the entirety of Coast City and it's people. 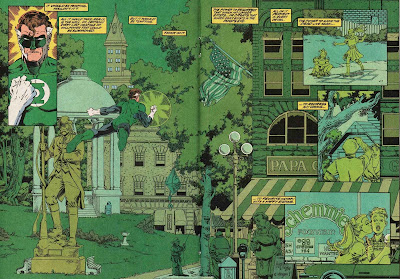 The entire fly around of the city is great, especially with the narrator explaining that with his power, it made Hal feel happy again...and like a god, continuing to flesh out the insanity of Hal Jordan.
After having a brief run in with a construct of an ex-girlfriend, Hal sits down and has dinner with his folks, and just when he was preparing to hear the words he wanted his father to say to him, the power in his ring depletes and the entire city just vanishes. Hal gets angry, especially when a projection of a Guardian appears telling him that he is to be reprimanded for his actions, as a ring should never be used for personal gain. Hal then punches the construct to gain just enough energy to make the trip back to Oa, where he is going to get the power he wants to bring back his home. The Emerald 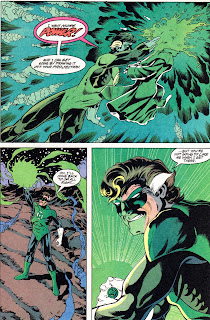 I was actually afraid of not liking the art, especially since I have been more attuned to modern looks, but the art here wasn't bad, especially when it came to all the details on the people and buildings of the super construct.

This first issue is the perfect way to begin the Emerald Twilight story arc. It shows how far Hal has fallen, and what actually drives the man wearing the ring. If I had to complain about anything, there were a few questions that could have been answered, such as  "Who destroyed Coast City," especially if you didn't read the Reign of the Supermen storyline. It also seems like not the best places to start reading the Green Lantern run, but it still makes a very good start to an arc.