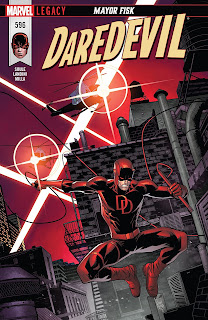 Dare To Be In Charge

When we last saw our special sensory superhero he had just jumped out of the window of the newly appointed Mayor Fisk's offices. Fisk now possess the office of Mayor, you heard me right. He told the police, that brought Daredevil to him, that DD assaulted him before jumping out and now the chase is on. How will our daring do gooder get out of this one?

We open at a Manhatten Precinct house. The commissioner is talking to the inspector over the phone calling for a level 4. Which is an all points bulletin of the highest level (9/11 is the last time they have called one the text says). The Commisoner wants every cop on the street looking for Daredevil. All because Daredevil "assaulted" Kingpin...oops...I'm sorry...Mayor Fisk. After the alleged assault DD broke a window and fled the scene. 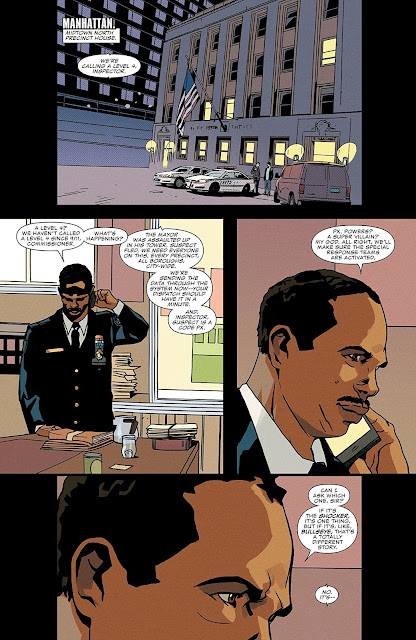 I sure hope it is a slow crime night in New York City, or else they are leaving the city completely vulnerable. If they are putting all the cops in every precinct on the case? Which is exactly what they appear to be doing. 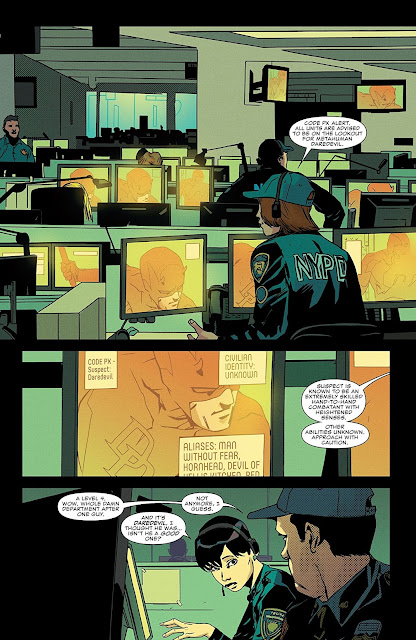 That aside we get a pretty cool multi-page action sequence of Daredevil fleeing the cops. Where the cops use choppers equiped with sonic cannons to make an usually easy cat and mouse situation for Daredevil exceedingly difficult. DD ends up calling in a favor from Salty Sam (Blindspot). Sam impersonates Daredevil and then uses his cloaking technology to lose the cops for Daredevil. 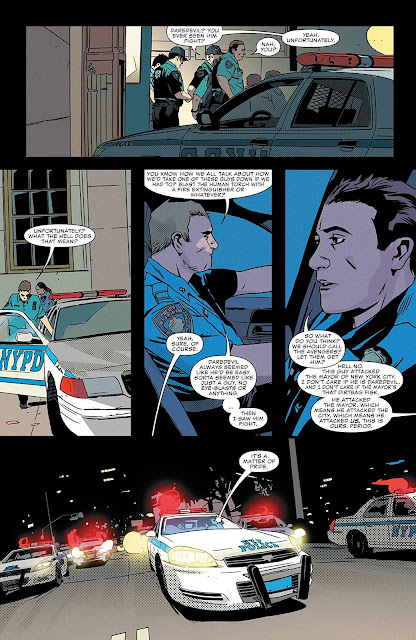 Muse, the Inhuman villain that took Blindspot's eyesight, makes a quick appearance in this issue signaling his return to the book. I have to ask though, why is New Attilan's High-Security Prison still using bars on their Inhuman jail cells? They really should think about updating that feature.

At the end of this issue we get Matt Murdock at work talking to his Paralegal. Who is handing down pressure from up on high for Matt to quickly build his case against Daredevil. His worries are quickly put to rest though with one phone call from Mayor Fisk asking Matt to join his office as Deputy Mayor...wait what now?

This is another issue that felt just a little forced at the beginning, but once you turn into the slide just a little bit it can be quite enjoyable. It really comes down to the cliffhanger. Lately Soule has really been delivering interesting cliffhangers again. I wouldn't mind a long story line with this status quo continually being the underlining plot going forward.