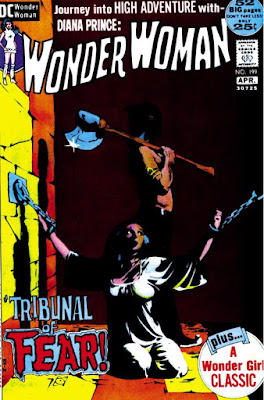 Wonder Woman has had quite the tumultuous journey from her early origins up until the modern rendition and Gal Gadot on the silver screen. Issue 199 of Volume 1 of Wonder Woman was an issue I came across in a volume showcasing the Bronze Age of DC Comics. It was a page layout showcasing her practice routine through martial arts and yoga. Intrigued by the fact that it was Denny O'Neil on writing duties I thought I'd give it a spin. Let's see how it was. 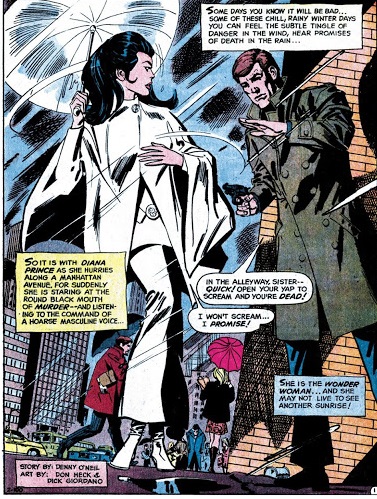 Well, it is a very different Wonder Woman than what I am used to reading. At the time of this issue, the character was completely reworked: she has renounced her mystic skills and lineage as a granddaughter of Ares (an origin point that wasn't added until the late '50s). She has also given up her powers and embraced the identity of Diana Prince, boutique owner, martial artist, and all-around adventurer. So it is almost like a female Bruce Wayne we encounter here, only one trained by her master I-Ching. The bulk of the issue sees her tasked with working alongside Private Detective Jonny Double, to protect somewhat sleazy nightclub magnate, Fellows Dill, from evil fanatics, The Tribunal. Cue some shackling of prisoners, an escape routine from Diana and some action-packed sequences. 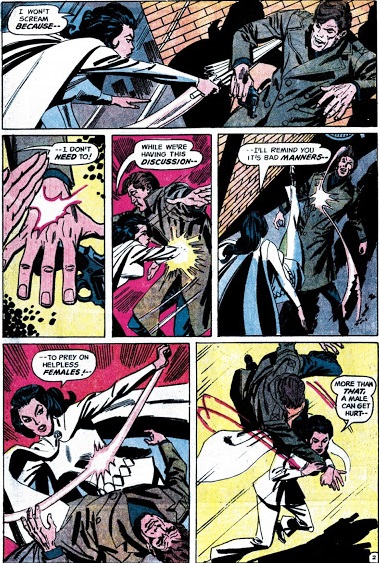 There is a gloomy feel about the book as a whole. It is almost as though the grimness of the early 1970s permeates the page. That said though the art is fantastic. I just love the style that DC brought to bear in these years. The character's poise and grace is relayed in the art but there is that grittiness here that one doesn't usually stumble across in Wonder Woman books. This is Wonder Woman working on a street level, with hoods and gangsters, sleazy nightclub owners and hooded cults. I gotta say though, Diana still kicks ass and is pretty awesome in this book; perhaps all the more so for losing the mystical abilities and relying on her wits.

I gotta say that I was surprised by this book. If Wonder Woman is something of a female equivalent of Superman nowadays, then this book pitches the character as more similar in powers to Batman and Bruce Wayne. I've found out subsequently that this is something of a controversial run, and that O'Neil was a subsequently annoyed at his work when looking back at this time. I thought it was a pretty good change though, and it may have been that the character could have been a great one had they decided to create a new character rather than retooling an existing one. Oh well, this was still a good read if only for the curiosity value. Worth a look.