Arkham City: The Order Of The World #2 Review 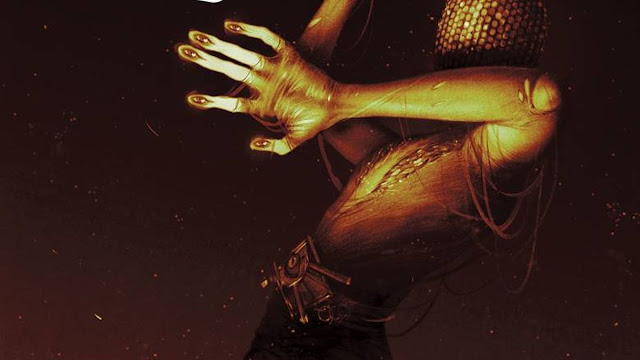 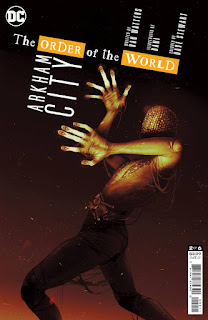 Watters finds his vision for the story

Arkham City: The Order Of The World #2 clears away the convoluted gloom of the first issue to focus on Dr. Jacosta Joy's near-sociopathic desire to help her patients at the potential cost of Gotham City citizens' lives. When her secretly-housed patient, the Ten Eyed Man, shows signs his sight might actually be preternatural, the race is on to find the remaining patients before Azrael's flaming sword can find them first.

It's a significant step up from the first issue, and there might actually be a story worth telling here.

I was a little down on the first issue because it was chaotic and dark for darkness's sake without really establishing who or what was the point of the story. In issue #2, the setup comes into focus about the type of story Watters wants to tell, and it's certainly got enough curiosity going to wonder what happens after this issue.

The issue is confirmed to be in "current' continuity as a post-A-Day event, and there are very mild connections with the current event, Fear State, that are referenced in a few snippets of dialog. However, Watters smartly doesn't throw the sophomore issue out of whack by derailing the fledging narrative to accommodate Fear State. It's briefly talked about to let you know this is the same timeline, but that's about it. 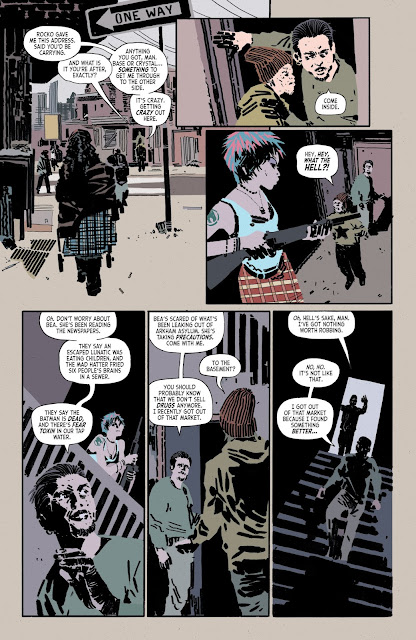 I like where the story seems to be heading in this second issue. Dr. Joy walks a fine line between minding her patient, the Ten Eyed Man, and allowing "too much" harm to happen in the name of protecting her patients. Her ability to willingly allow some harm to occur in the name of protecting her patients verges on the socipathic, so you wind up with a story where none of the protagonists are necessarily good people. They're all shades of bad but some are less bad than others. Flawed (to put it nicely) protagonists allow the story to unfold in unpredictable ways. How far would a morally gray person go to further their goals?

When the Ten Eyed Man appears to be able to identify the whereabouts of other Arkham escapees, the point of the plot becomes clear - find them before Azrael does. Dr. Joy has to rely on a lunatic, who may or may not have powers, to do it. Now, we see where the story is going, even if we can't predict how we get there, and the eclectic collection of characters at the heart of this chase means the path towards a conclusion could be a wild one. 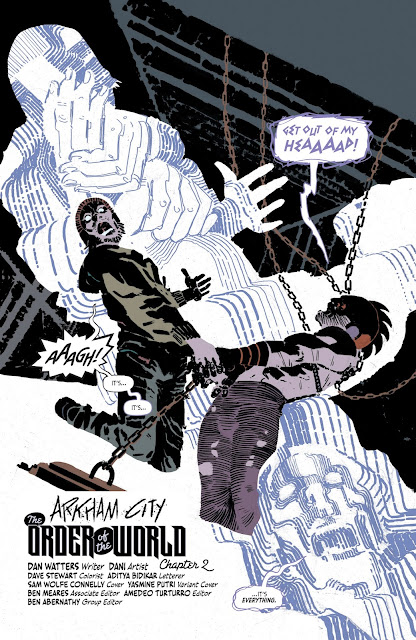 On the art, Dani is not everyone's cup of tea. Depending on the panel, it looks like Dani is paying an homage to Frank Miller in earlier works such as The Spirit and Sin City. If that's the case, the art is not yet to Frank Miller's level and it shows. If the similarities to early Frank Miller are completely coincidental, it's a strange coincidence. However, the dark gritty tone of the art does suit the subject matter, so you could say Dani is an acquired taste in this series.

Bits and Pieces
Arkham City: The Order Of The World #2 pulls the grim, darkness aside enough to lay the groundwork for a potentially compelling story. The point of the plot is firmly established and makes sense in a Fear State world without bending to accommodate Fear State in an inorganic way. The complicated characters make for unpredictable actions, and that may be the best way to position this type of story. Dani's hyper-stylized art may not be for everyone, but it certainly fits the gritty, urban aesthetic of the story.
8/10
Posted by Gabe Hernandez