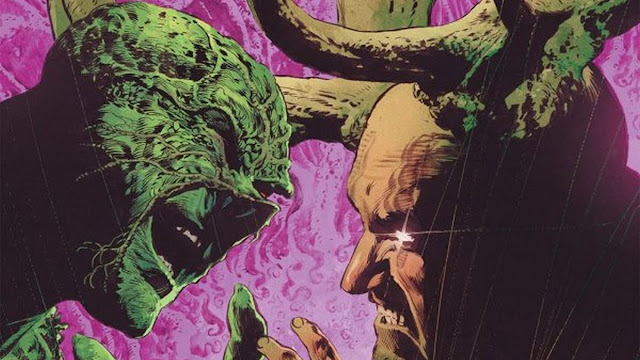 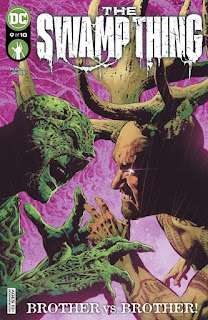 Finally, A Story Worth Telling

Written By: Ram V.
Art By: Mike Perkins
Colors By: Mike Spicer
Letters By: Aditya Bidikar
Cover Art By: Mike Perkins, Mike Spicer
Cover Price: $3.99
Release Date: November 2, 2021
The Swamp Thing #9 puts Jennifer Reece squarely in the hands of the Prescot Corporation as the entire motivation behind their interest in Swamp Thing is revealed. When Jennifer learns what her company is up to, Levi and Jacob arrive to do the right thing from opposite ends of the moral spectrum.

Well, well, well. Color me shocked. This was a structurally sound, interesting, relatively flowery-language-free issue. While it's a blessing to have an issue that was somewhat interesting to read and has good ideas in this otherwise troubled series, it's a shame that readers couldn't get something worthwhile until issue #9 out of 10. How's that for back-handed praise? 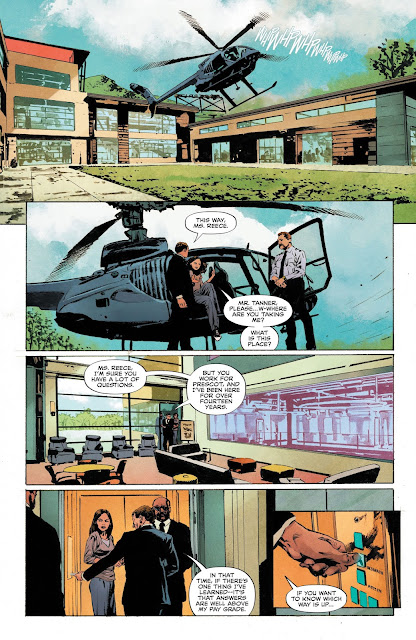 In isolation, this was a very good issue. Prescot's motivations are revealed with a little bit of backstory that opens Jennifer's eyes to the foundations of the company going back centuries. That foundation has much closer associations to The Green than anyone suspected, and that's an interesting idea that's worth exploring. If morally deficient companies and government organizations had a way to scientifically tap into a fraction of the Green, what would they do with that knowledge? How would they use that knowledge to benefit humanity? Or how could they weaponize that knowledge for selfish gain?

These are all interesting questions worth exploring. Questions that should have been asked and explored, at least down one or two trails, much closer to the beginning of the run instead of closer to the end of the run. With this new information, it feels like so much of the series was wasted on filler and fluff to get to this point. 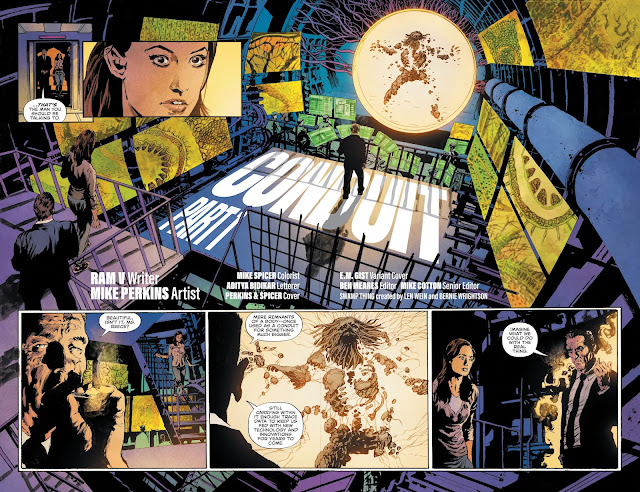 The conflict with the Suicide Squad? Pointless. The interactions with the Flouronic Man and Poison Ivy in the Green? Irrelevant. The Contagion plaguing the Green? Never mentioned again or so poorly explained that its resolution was completely forgettable.

This. Issue #9 is what this series needed. It's the foundation for a story that captures the imagination and asks "What if...?"

The art works well for this type of storytelling. It's cool to see Jacob use his full power as a sort of next-generation Floronic Man. That said, it would help if the battles taking place over large spaces didn't spend so much panel time on close-ups. It's okay to give the battles some space to appreciate the size and scope of power Jacob and Levi have and how much damage they can cause when they let loose.

Bits and Pieces
The Swamp Thing #9 is the issue this series needed from the get-go. Readers get to know more about Levi as a character through his actions in this issue than we have through the first 8 issues. The central conflict is clear, the character motivations are apparent, and the art excels in giving these Green-based characters a battle for the ages.
8.5/10
Posted by Gabe Hernandez