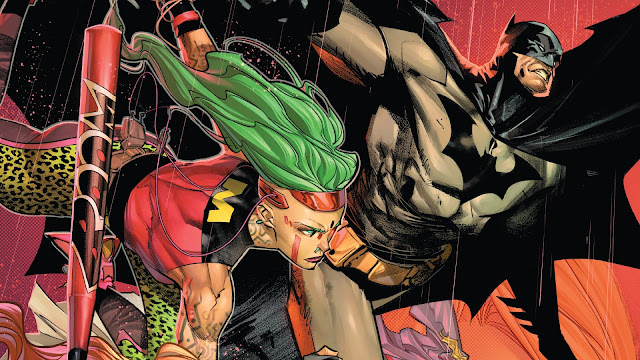 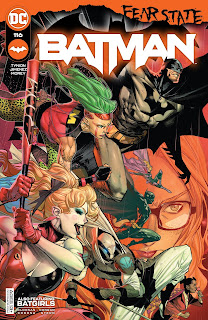 Writer: James Tynion IV
Artist: Jorge Jimenez
Cover Price: $4.99
Release Date: November 2, 2021
I have not been a fan of this whole Fear State "Event" and am glad it's almost over.  I have pointed out my problems with it in my past reviews, but the biggest one is that not much has happened.  Sure, everyone is shouting out their big plans and ideas, but we've gotten a lot of chasing Peacekeeper-01 and not a ton more. In addition, Batman doesn't feel like a significant player in his book, and other characters pop in and out of the story in haphazard ways.  Eventually, this lack of story is going to come calling, and that happens this issue.
The issue opens with a confusing start, mainly because we have seen so little of Ghostmaker that I wasn't sure who was talking to the Peacekeepers invading Eden.  It's no big deal, though, since it only leads to a non-fight that ends with Queen Ivy freaking out. 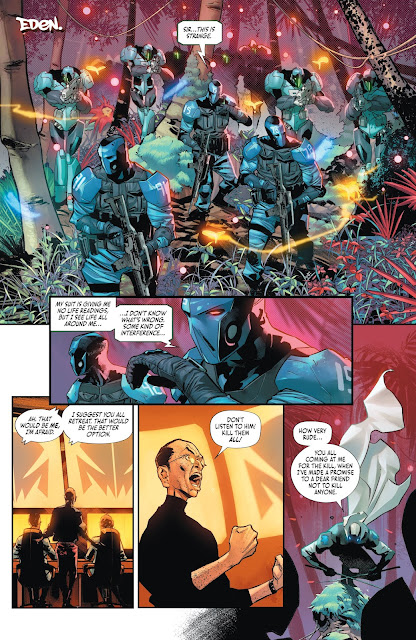 It's then off to Miracle Molly and her sidekick Batman in the sewers running into Scarecrow.  Batman talks some shit to Crane since he knows he can't control him anymore, but he doesn't know that Miracle Molly is easy prey for Crane.  I guess he didn't get word that Tynion forced the connection between Wyse's mind-wipe machine and the Mad Hatter he uses the last couple of issues.
Again, it doesn't do much except make sure that Batman has to follow Scarecrow to where he has Peacekeeper-01.  So what do we get in this big confrontation in the penultimate issue of the event? First, Scarecrow gets his control device knocked out of his hand by Batman, then gets taken down in such an anti-climactic way that you can only wonder who the big bad of this story is.  So, what's left?  Peacekeeper-01 claiming that he is better than Batman and another fight.  Everything keeps coming up Peacekeeper-01!  I guess he's the real villain.  But wait!  We end the issue with Ivy looking like she is going to be the villain.  But what!  Harley and the Gardener show up out of nowhere to save the day.  But wait!  Oh, screw it, this is all a bunch of nonsense! 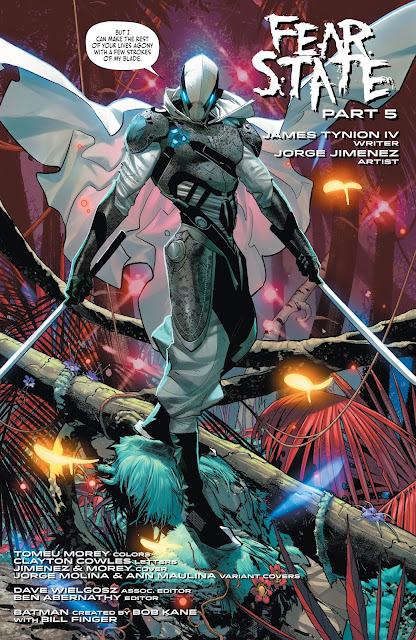 This issue looks good with Jorge Jimenez doing the entire issue, but Fear State has been bad, keeps getting worse as it goes on.  I usually say we'll see how Tynion ties things up, but there aren't many exciting things to tie up here, so who cares.
Bits and Pieces:
Fear State trudges along, doing what it's been doing from the start, which is not much at all.  It looks great, but nothing feels earned in a convoluted story that talks big but reads small.  This is such an anti-climactic way for Tynion to finish up his DC Comics career.