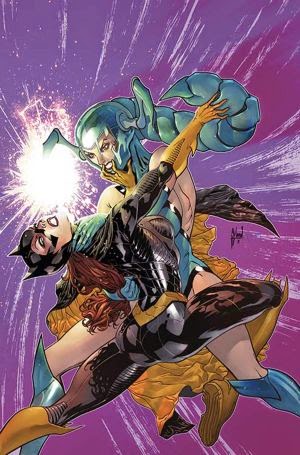 
Batman: Eternal is a weird little book.  Although it takes place in the New 52, it just seems out of place and out of time.  Maybe it's just me, but that feeling has made everything that happens seem less important...or even real.  Then there's the problem of a thousand plot threads thrown together, multiple character introductions and the revolving creative teams.  It just seems to make a book that is less than the sum of it's parts.  This week we get a new creative team.  I can't believe it.  Tim Seeley and Ian Bertram jump in with an issue that probably would have been easily forgotten if it wasn't so bizarre.  Is it any good?  It all depends on where you're coming from.

This week on Batman: Eternal, a very special episode featuring Fathers, Brazialian Soap Opera stars, Scorpions, Batgirl and Red Hood. This issue has everything but Arnold and his ginger friend at the bike shop.  Tim Seeley slows things down a bit and most of it is pretty forgettable.  What isn't forgettable is Ian Bertram's art.  His style is a bit love it or hate it and I'm in later group.

Batgirl is in Brazil and she wants answers...from Gonzolo Dominguez.  You know, the Pharaoh?  The most popular Brazilian television star?  Don't worry, I don't know what the hell is going on here either.  Batgirl thinks he might be responsible for the train disaster her Father has been blamed for.  Unfortunately for both of them, Scorpiana is also in the house and she wants blood.

Meanwhile, Alfred is trying to nurse Julia back to health, but she want no parts of that.  In fact, she wants no parts of Alfred either. Alfred has been a bit of a deadbeat dad and while he's ready to make up for lost time, Julia isn't .  That is until she starts bleeding out on the stairs of Wayne Manor.  It's funny how a stomach wound brings families together, isn't it?

Then we get Stephanie Brown who finally is showing why she's called spoiler.  We get to see the hilarious origin of her Dad, the Cluemaster, and the not so hilarious way he got out of trouble with Batman.

The issue ends with some Red Hood action that ties in a bit from last week, but still seemed tacked on, Selina dissing Batman and one of my all-time favorite characters arriving to take care of Scorpiana.  If you are a Batman, Inc. fan you will be very happy.

Tim Seeley does an okay job.  It is a fun enough, but is pretty much a throw away issue.  I really liked the Spoiler part, but everything else was just filler.  This was the first issue of Eternal that you could skip and not be left behind.

Then there is Ian Bertram's art.  It's unique, that's for sure.  I hated it.  It was ridiculous to the point of being distracting.  I guess you could say it had an "indie" feel, but it just doesn't fit a Batman book.  The character designs were crazy, especially the huge eyes and I don't mean that in a good way.  I also want someone to send Ian a note, Red Hood's mask doesn't have a mouth.

Batman: Eternal #11 is my least favorite issue so far.  Tim Seeley's story is fun, but forgettable and I hated Ian Bertram's art.  I can only imagine what newcomers would think of this issue and even  series readers could skip it and not really miss much.