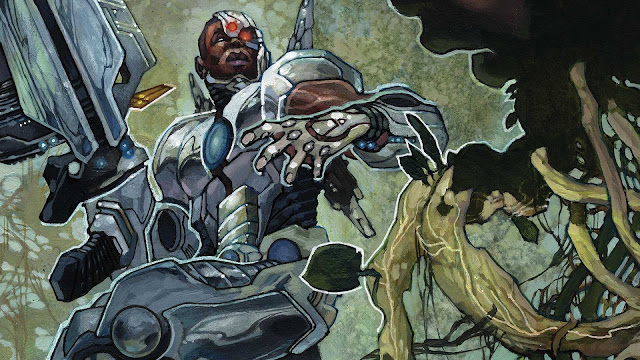 Wish Upon A Horn 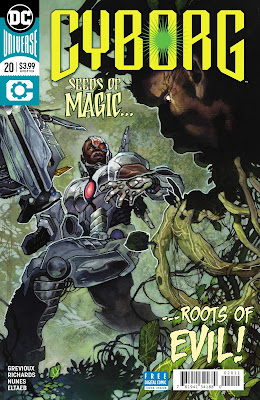 It's the final issue of Cyborg and while I hate the idea of Victor Stone not having a book........ It's probably for the best because we haven't gotten anything decent out of this series and by the looks of it, this final issue isn't going to be much better.  In our previous issue, we saw Cyborg travel to Sudan, where he found a magic horn that granted him three wishes and for his first wish...... he wanted to be human again.  Which just really sucks because even though at the end of our previous arc before this we finally had Vic stop complaining about the whole "Am I Man Or Machine?" bit, but here he's back at it and it turns out that plain old Victor Stone isn't enough to contend with the evil General of Guardians of the United Republic.......... plus, Vic has malaria because every wish has a monkey paw effect.  Let's jump into this issue and see if Vic can somehow un-wish himself and put a stop to this evil horn and save this area of Sudan.  Let's check it out.

Our issue begins with the General just continuing to be all around evil and Victor Stone kicking himself for allowing all the children of the previous issue to die........ so what does he do?  Why, he takes the horn and wishes for them to be alive again, which promptly turns them into zombies, where they start attacking everyone.

Vic and Sarah run into the jungle to get away, but Sarah sprains her ankle and while Vic is looking at it we get back into the whole "Man or Machine" bit, which is just so overblown, but thankfully....... after pages of it, Sarah is attacked by a zombie and Vic takes the horn one more time and wishes that things would go back to normal from before he found the horn...... which effectively makes this whole story pointless now, but Vic is Cyborg again and there's no ramifications to that wish, only that Vic knows what's coming now and takes the General on........... who can now just use the horn's power without wishing and makes a rock body for himself.......... I don't know.

In the end, all's well that ends well, people died who should have died, the power of the horn was wished away and because this wasn't a selfish wish, there's no ramifications and we end this series with Cyborg telling us yet again that he's not going to complain about the whole "Man or Machine" thing anymore........ I don't believe him.

That's it for this final issue of Cyborg and where you'd hope that this series might finish off strong with a great final issue out of nowhere........ Well, that's just not realistic and what we get is more nonsense that doesn't really make sense and everything really not mattering for this arc because the majority of it was wished away.  I'd say that we could at least takeaway the idea that Vic is over his personal demons about being a cyborg, but since we've seen him do it before and then just go back to it the next issue, I'm guessing that this trope will stick with each new writer who takes on the character.  The art in this issue was good, but that's all that was really good about this issue because in the moments where it wasn't just nonsense, it was overly preachy and just not fun to read.

The end of the Cyborg series is a lot like the rest in the series in that none of it really matters and everything that our hero overcomes here will just be used again when the next writer takes on this character.   The art in this issue is good, but everything else is just cliched nonsense that wasn't a good time to read at all.