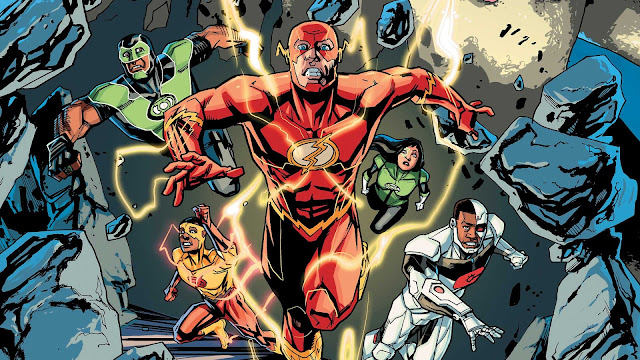 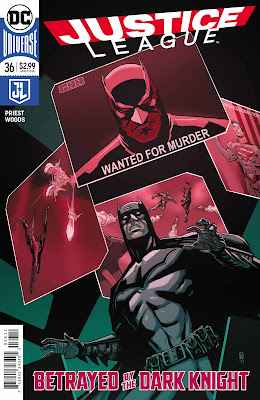 Alright, this is my first Justice League written review since the New 52........ and while I'm all about the Justice League and their adventures, Priest's run so far hasn't exactly been the reprieve of Hitch's run that I was hoping for........ Yeah, it's written better and the issues make more sense than we previously had, but goddamn has it been all doom and gloom and where I'm looking for fun, we're getting the Justice League disassembled.  Hopefully things take a turn for the better as the series progresses because Justice League should be a fun book for everyone.  Let's jump into this issue and see if any fun can be had.  Let's check it out.

Our issue begins with the Justice League in hot water after the events of the first issue to this arc, where people were killed after the League interfered with a police matter and things aren't going to get much better either because the chairwoman bringing up inquiries of the League's conduct is then killed by someone dressed as Batman, who too has the ability to teleport away, like we've seen Batman doing with the Watchtower teleporter.  So yeah, things aren't looking all that great, not to mention the members of the League slowly losing focus on why they do what they do.

The big problem this issue though is all about a spy sub that was within Chinese waters that the Justice League want to take care of because of the nuclear weapons it holds, but thanks to recent events, Batman wants the League to sit on their hands about it because it goes against their charter.  Even when Aquaman says screw the charter and they continue to bring the sub into international waters, Simon is met by hostilities from the crew of the sub, who like the rest of the world at this point are saying "Who asked you to help?"

In the end, the sub problem is solved using diplomatic means and it appears that Batman is off to confront his copycat, but as this issue closes things become very confusing for me because even though we think that Batman has gone undercover to flush out this wanna-be, it appears that Simon was in disguise and this not Batman knew this and subdued our Lantern hero.......... but again, this ending is super confusing in my mind.

That's it for this issue of Justice League and where people may be all about a humanizing of the Justice League and bringing them into a real world scenario, I can't help but feel that the issue comes off a bit boring because of this and actually makes me not like the character that I've loved most of my life....... not to mention all the doom and gloom that's surrounding the entire arc.  Yeah, it's different than what we've had, but it's not fun and I'm not about anything that makes my heroes come off in a bad light.  Not only that, the ending to this issue was really confusing in my mind and while I think that Priest at least has a pretty interesting idea behind this arc....... right now, I'm just waiting for it to be over because it's just not hitting with me.

While I really enjoyed the art in this issue, the doom and gloom is just oppressive as hell as we watch our Justice League heroes become shells of their former selves........ and really, just not likable.  Overall, this arc has interesting ideas, I just wish that it would get to the point faster because I don't know how much more of this deconstruction of the Justice League that I can take.