Where the Hell is a Damn Doctor 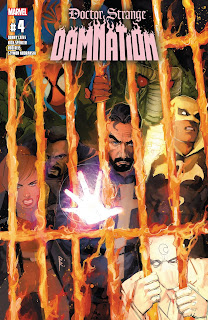 Doctor Strange brought Las Vegas back from destruction. In doing so he brought hell with it. Mephisto now lays claim to the city of sin. Doctor Strange tried to fix what he broke and was turned into a Ghost Rider. The Avengers tried to help but were turned into Mephisto’s Soldiers of sin. Now with an army of super-powered Ghost Riders at his side, it is left up to an unlikely team. Wong formed a team and a plan to take down Mephisto, but will it all work out in the end?

We open to the battle raging on with the good guys taking a beating. With the end in sight, Mephisto comes roaring out of the Inferno Hotel on Jonny Blaze’s bike to gloat. It turns out this was all part of Wong’s plan. In Las Vegas, Mephisto isn't as strong as he usually is and with Johnny Blaze, on Mephisto’s throne, he has no control over his Avenger minions.

The Ghost Rider Avengers beat on Mephisto while Wong gloats and then Mephisto fights back by cracking open the earth to make a path to hell. Wong falls in and Man Thing saves him but Wong makes a proclamation that he is not afraid anymore and let's go falling down into hell. 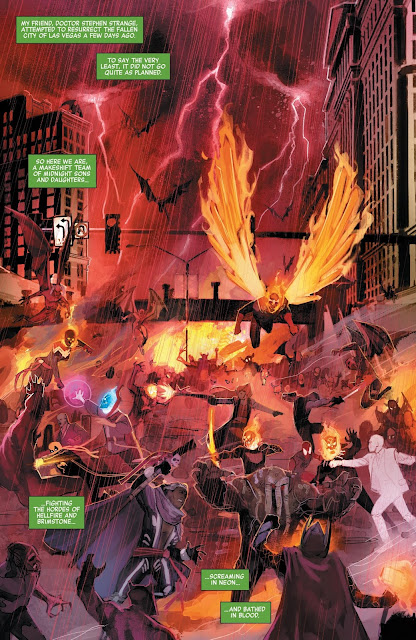 Johnny Blaze is waiting for Wong where they have a little heart to heart about Stephen Strange. It seems that Wong thinks Doctor Strange needs a little morale boost. Johnny has a perfect idea.

While this is going on everyone battles Mephisto and they are struggling until Johnny Blaze imbues the good doctor with the souls of the Avengers and their powers too. Doctor Strange whips Mephisto’s ass and right when he is about to deliver the killing blow Mephisto escapes. Wong And Doctor Strange make amends and have a little chuckle. 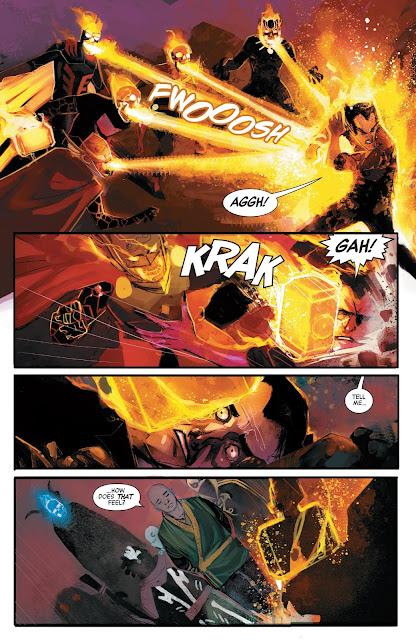 We see Mephisto again thinking he made a good escape back to hell but when he rounds a corner he has hundreds of previous Ghost Riders there waiting for him they kick his ass and send him back to the heroes. The heroes then imprison Mephisto in the penthouse of the Inferno Casio that is forever remaining in Las Vegas and now has become a tourist attraction.

After the end, we get an epilogue that explains to us that Doctor Strange still has more plans with the Midnight sons and daughters and these plans involve more team members and I couldn't care less.

I was so excited for this little crossover mini-event at the beginning and at the end, I wish I didn't waste my time. The balance that a team a book needs to have was just not here. It really seemed like the team didn't even matter, and the tie-ins were awful. The art was okay when hell was reigning in Las Vegas but after in the hurray point of the book, it felt uninspired. I left this event only enjoying the Doctor Strange book.