Adventures of the Super Sons #3 Review 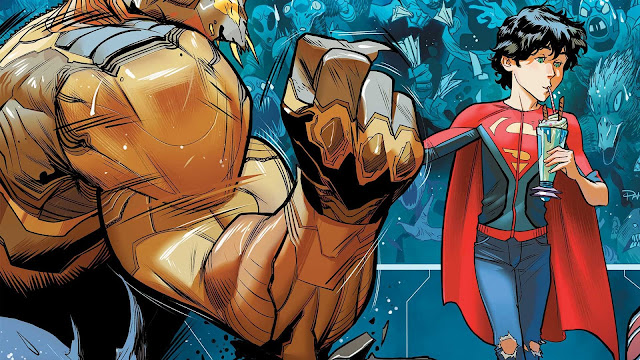 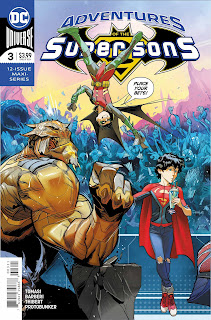 Writer: Peter J. Tomasi
Art team: Carlo Barberi, Art Thibert, Protobunker, and Rob Leigh
Cover Price: $3.99
Release Date: October 3, 2018
Reviewed by: Jon Wayne
Here we are back for another issue of the Adventures of Super Sons. Last time we found out a lot about the origins of our new villains. Turns out they’re not DC’s greatest villains’ kids from a different Earth, but rather aliens whose society worships earth – and these kids have chosen to worship the villains. And at the end, we saw the gold/red/synthetic Kryptonite split Jon into Superboy Red (Red) and Superboy Blue (Blue)! What’s up with that? Let’s dive in and find out.


We open to our two Superboys trying to fight each other with Robin breaking it up and the Gang watching it all. It’s enjoyable banter between the two versions of Jon while fighting each other and the villains. Eventually, Robin and Red team up for a moment to get Rex, before Ice Princess and Kid Deadshot arrive and stop them cold.
We cut to Joker Jr. who was blasted into space who is rescued by a mysterious stranger. It doesn’t really make sense that he’s survived this long in space without any protection, but he’s an alien so I assume that’s the reason why. Then what follows is just a lot of fun as the Superboys kinda sorta put aside their nonsense and team up to deliver a beat down of the Gang. 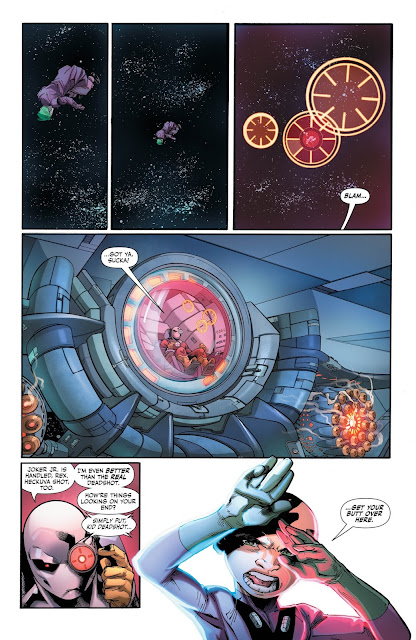 We see Robin doing some detective work while faking out Rex, and lots of Red making fun of Blue for having a crush on Ice Princess. Also, it does feel like the rest of the Gang apart from Rex are just along for the ride, they hold no real antipathy for the Super Sons – they just want to kill them! Eventually Blue uses his heat vision to hit Red and accidentally breaks open the hull of the ship! You know I don’t do spoilers but the ending is fun, though it’s a bit of a deus ex machina moment. 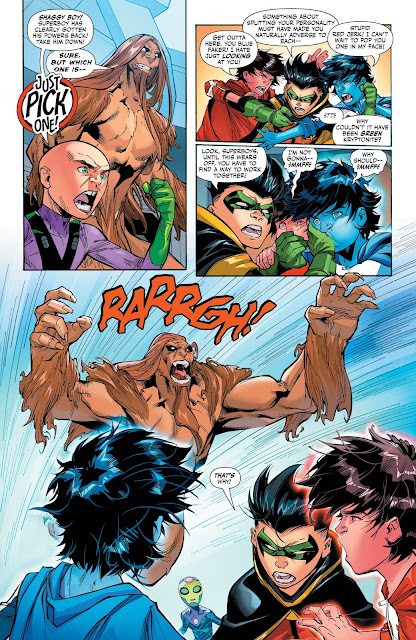 Art is stellar per usual. Carlo Barberi continues to impress, and I think his lines go with Art Thibert’s colors quite nicely. What I enjoy the most is how distinguished each member of the Gang looks, they all kind of look like their real DC counterparts, but are different enough to stand out on their own. I really hope they stick around past this series too!


Bits and Pieces:
This was a solid, fun issue. However, though the banter between the characters is always great and continues here, the plot doesn’t move all that much. I love our characters, and I love Peter Tomasi, but all we get is a lot of banter and fighting and a ship crashing. I trust Tomasi, so I’m not gonna be too harsh, but I want to see some forward progress next time.
8/10
Posted by Jim Werner