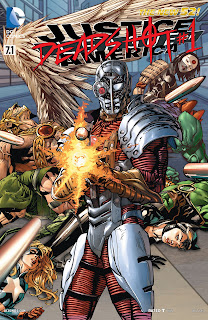 This Issue Hits Its Mark

Now here's a Villain's Month issue with some balls.  Not actual balls that would be weird, but who can say that Deadshot isn't a badass?  And if you can I don't want to hear it.  Badass.  Let's get right into this issue.  We are given another origin story shown with flashbacks while being tucked inside a story about what Deadshots doing now that the Suicide Squad has disbanded.  When Deadshot was a boy, he lived in the Narrows of Gotham with his parents and sister.  Now while Floyd laid in bed reading a pulp novel, his parents argued about food, and money, while his sister watched them argue through a key hole.  In the apartment next door, a couple of junkies apparently ripped off a dealer, and two men break in to their apartment to send a message.  Sixty bullets later, the junkies are dead, and so are Deadshot's parents, and sister from the bullets that went through the walls.  Deadshot runs outside to see the two men and vows then and there to avenge his parents.


Years go by and Floyd hones his marksmanship skills, and eventually kills a local mobster's top two men with one bullet to prove a point.  The mobster is impressed and pays Floyd for his talent.  Deadshot tells us that a bullet should always have a purpose, that is why he will not fire a bullet indiscriminately.  Because his family was killed with no reason, no purpose.

Now we wrap up the story in the present time.  Deadshot dropped himself from a drone a mile up, in order to take a shot at a guy who stole Wayne tech armor, and needs to steal chemicals to keep the suit powered.  Now, this guy looks like he's wearing an original Iron Man suit, I think Wayne Tech is going to get sued.  Anyways Deadshot created a special bullet to pierce the armor, and then while falling shoots another round into the hole he just made.  Like I said bad ass.  But we find out now that this guy in the armor was the original mobster that paid Deadshot when he killed his top two men.  We also find out that these top two men were the ones who killed his family.  As Deadshot parachutes down he sees that the Armored mobster's son was with him.  Deadshot will not make another one of him.  He kills the boy.  Wow.  In the end, Amanda Waller calls after the job, and wants Deadshot to get the Suicide Squad back together again, and come to help her.  Deadshot agrees after he sees that she has deposited ten million into his account.

I don't know if I'm just biased with my love for Deadshot, but I thought this was a great story.  The writing was superb, and I only hope that this will continue with Matt Kindt taking over Suicide Squad next month.  One of the better issues I've read so far in Villain's Month because as small as it was, there was a purpose.  Yeah, we get a nice back story on Floyd but this will also lead nicely into the Forever Evil crossover next month.  So go check it out, and know the bad ass that is Deadshot.