Poison Ivy's Itching for a Backstory 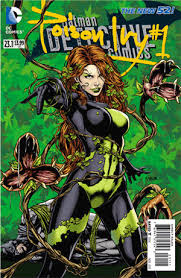 For Poison Ivy's Villain's Month issue, we see a Gotham in chaos.  The power is out, the Batman is out, and the criminally insane run the streets.


We begin the story with Poison Ivy walking the streets of Gotham.  She comes across a man throwing his ex-wife down to the ground, screaming about seeing his daughter, and that he doesn't care what he has to do to do it.  This image sparks the beginning of the flashbacks that tell us the story of how Pamela Isley became the twisted Poison Ivy.  We find out that Pamela's mother was a victim of abuse, by her husband, and that Pamela witnessed most of the bruised aftermath.  Her mother would always forgive her father when he came to apologize bearing flowers.  Pamela learned from her father that one can manipulate others with flowers.

Back to present day, Poison Ivy squeezes the abusive man to death with branches and vines.  Moving on through the city Poison Ivy comes upon teenagers burning down the botanical gardens.  (well what else would they do to continue the story?)  This triggers another flashback where we learn that the abuse in Pamela's family continued until the police arrested her father after they found Pamela's mother buried in the garden that she loved so much.  Moving on to Pamela in college we see that she started observing people (subjects) that she would sell her pheromone drugs too.  Which landed her in jail, which almost led to a expulsion, but what finally led to her using the pheromone drug on her dean, to get him to let her stay in school, and graduate.

Continuing the flashbacks we see that Pamela all grown up, goes to the prison to see her father for the first time since his arrest.  Sitting at a table neither of them say a word.  Pamela figures that actions will speak louder.  She lunges across the table and lays one on daddy's lips.  We find out that he was found dead the next morning, attributed to heart failure.  Moving on in the flashbacks we see that Pamela got a job at Wayne Enterprises, in their R&D division.  Pamela then goes to Bruce Wayne with an idea to cut all advertising and marketing and let her use her pheromone drug to tell the public what to buy.  Bruce Wayne finds that unethical, and fires her.  As the security is taking her out of her lab, chemicals splash on her, and blam.  We now have the new origin of Poison Ivy.  After that, she was able to hear the language of the plants.  In the end, Poison Ivy begins to remake the city into a jungle, where all the buildings and roads are grown over with plants.

This is a good story, just not a fun one.  We get the back story of a Batman villain I don't really enjoy as much as others, but I found it to be a good story, so that has to say something.  Sadly I find it to be a story that really isn't needed, and I fear that the majority of Villain's Month will be the same.  But for fans of Poison Ivy, I'm sure you'll find this issue very enjoyable.