Image's latest title Dissonance is a tale of an alternate world where Earth is populated with powerful human-spirit hybrids called Fantasmen as part of a long established pact with mankind. Let's see what sort of a start this new series got off to... 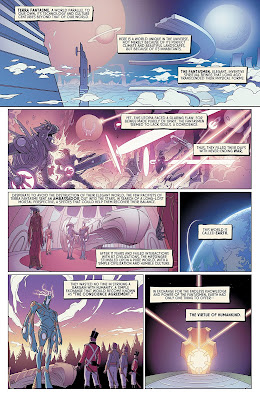 Well I have to say this book certainly adopted the immersive technique. After a brief potted history of the mutually beneficial arrangements put in place between humans and the fantasmen, the book just dumps you straight in at the deep end. While I had just about got my head round the high concept of the book at the end I really needed to stretch my brain to keep up. Certainly the first half of this issue was pretty dense stuff and the writing was quite detailed. 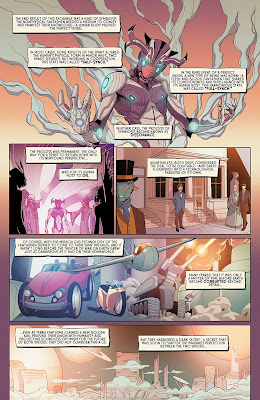 Not that that is necessarily a bad thing. I liked the concept once I got my head around it with humans reaping the benefits of the fantasmen's more developed technology and enlightenment, and humans helping them out in return with the ability to anchor down their spirit and conscience through the virtue of humankind: an arrangement established under The Conscience Agreement. The use of the human body in tandem with an individual is a process known in the book as the "half-synch". The rest of the book plays out through a demonstration of the dynamics of this relationship. 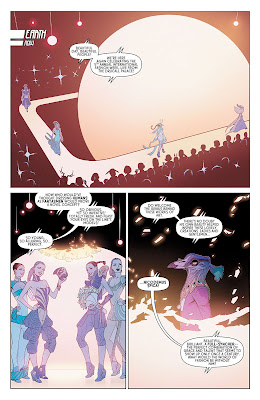 The other main part of the book relays the story of Folke and Roisia Herviett, two siblings with opposing worldviews, who are challenged to prove their worth and take up their parents’ positions in a devious group who secretly run the world. Roisia in particular seems to show a sadistic streak, as witnessed through the punishment she gives to Portia, who she refers to as her whipping boy, literally whipping her in a particularly cruel scene. Much is yet to be revealed about the dynamic between the Herviett siblings it seems.

As the issue closes it becomes clear that a third plot element is coming into this environment. Seraphim, a Fantasmen warrior guard, has been sent to prevent a catastrophic event from affecting the Earth and its own universe. Again, we await further developments on this front.

This is a pretty ambitious first issue and although the reader gets there in the end, I felt it demanded quite a lot for an opening installment. There were however some clever ideas, the art was fairly strong and there is nothing that one could be overly critical about. A solid enough start to the new series.