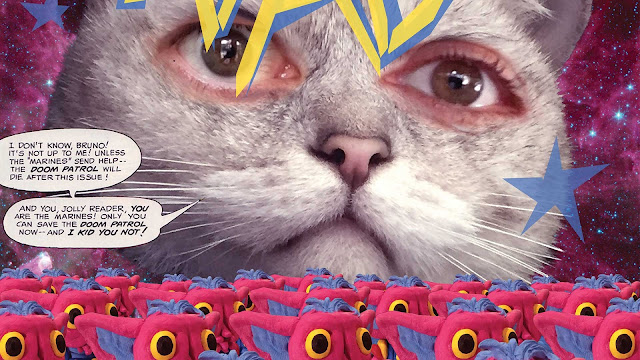 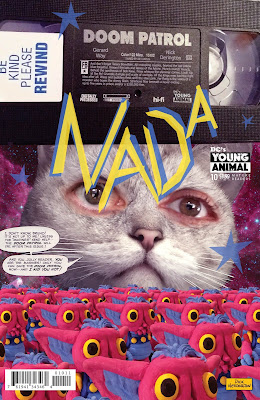 I Think I Love None, So What Am I So Afraid Of?

Dum de dum, here I am, strolling along the sidewalk without a care in the world…what’s this? A new issue of Doom Patrol? Why, that’s the rarest plum of all! Let me take this rarely seen item to my home so I might write a review of issue #10, that you can read right now!

Far be it for me to dispense advice about matters romantic, but I don’t think that having an unplanned child is a good foundation for a solid, long-lasting relationship. Sure, it has happened before, but in my experience children complicate, and don’t ease one’s personal affairs. So imagine how complex things will get now that Casey Brinke has inadvertently gotten Terry None pregnant—and they didn’t even fuck! Casey just ate a particularly fresh box of $#!+ that, once Terry began tap dancing to activate the psychedelic portion of already-consumed (but not as fresh) $#!+ within everyone’s bodies. This makes them turn into expanding globes studded with repeating shapes that ascend slowly towards space. I believe, however, that possibility was on the warning label! 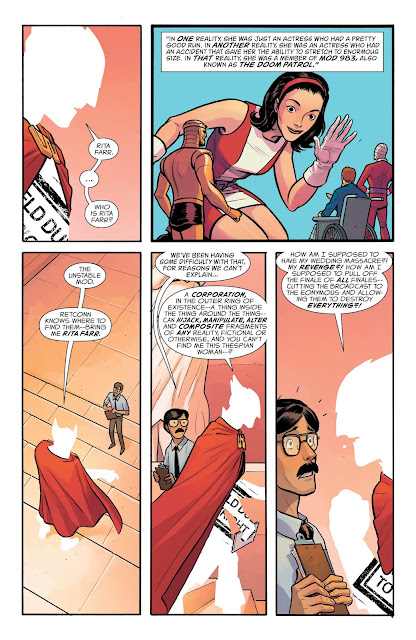 All of that make sense? Sorta? If you’re reading Doom Patrol, and have the available brain matter to remember what happened in the last issue that was out last October or November, then it all fits together. The new Brotherhood of Nada has hit the town, and Mr. Nobody’s daughter Terry None (who didn’t see that coming??? Well, to be fair, we only knew at the end of the last issue) is putting on a tap dancing show for a group of unseen folks in multicolored hazardous material suits, which activates this $#!+ and makes everything on the street pretty wacky besides. Seems like Mr. Nobody might be brokering a deal with these guys? Or he just likes having a psychedelic playground for his weirdo Brotherhood cohorts. 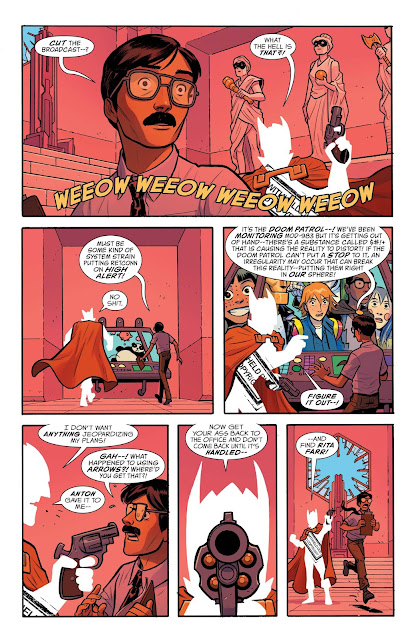 What else happens here? The Great Ludini is reunited with his family and then they’re all teleported away by a demon squirrel. Pregnant Terry None is shoved into Danny the Ambulance, and they race to the hospital with the Brotherhood of Dada in hot pursuit. That blank Thor character, Copyright Withheld, is now looking for Rita Farr because she played his wife in a movie or something? And in the end, the Ambulance and everyone involves smashes into the front lobby of Retconn, which will figure into this Milk Wars crossover event coming up? Uh, that’s cool, I guess. 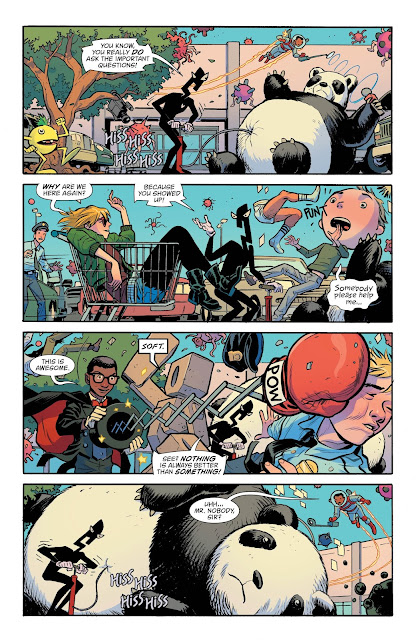 Doom Patrol has really become like ten pounds of shit in a five pound bag. There’s so many things thrown at the reader, just to up the “wacky factor,” that it becomes nigh unintelligible. I like character payoffs, like seeing Sam’s family reunite moments before being sent to hell, or Terry and Casey holding hands as they admit to liking each other, but the rest of it is puppets throwing fish and eyeballs with wings rapping or whatever. Particularly for a comic book that comes out so irregularly, having all these loose threads dangling around is downright insulting. I still love Nick Derington’s artwork and there’s no problem here in this regard (despite two of the pages being mostly blank, ostensibly for story reasons), but other than that, I’m pretty disappointed in this series. 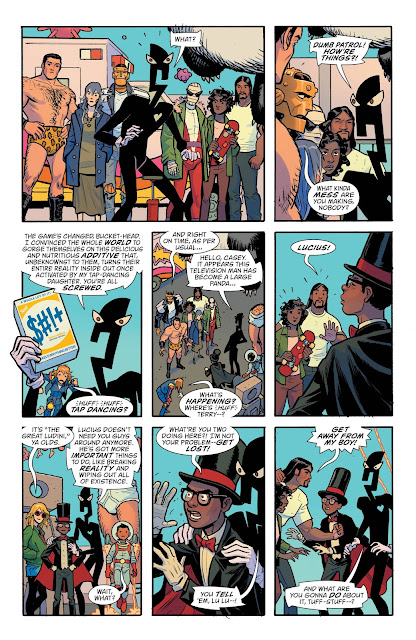 This issue is trying to be a little too cute for a series that comes out so irregularly. Next issue's solicit has been pulled already, so like I tell you every time an issue of Doom Patrol comes out, wait for the trade collection. Though the way this issue seemed tossed together like a large salad, that collection may not be worth your time, either.