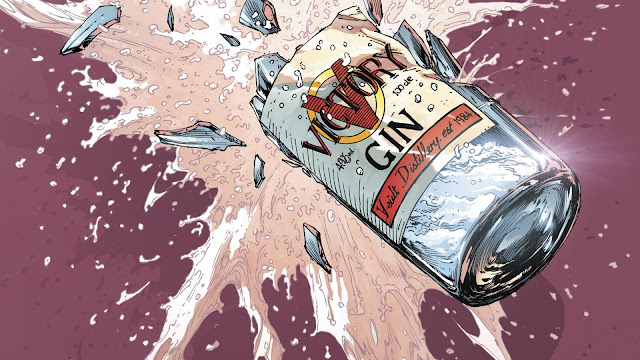 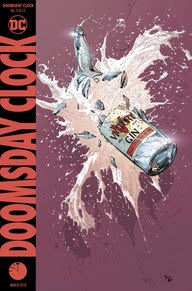 The hunt for Dr. Manhattan continues with this installment of the Doomsday Clock, where we previously saw Ozymandias, Rorschach, Marionette and The Mime travel to the DCU in search of the big blue god, but instead Rorschach found the Batcave and Ozymandias found Lex Luthor........ and the Comedian alive.  Hopefully, we'll get to the bottom of how and why Edward Blake is alive because that reveal really threw me last issue and I really need some answers.  Let's jump into this issue and see if Geoff Johns can throw some light on this darkness and illuminate us all.  Let's check it out.

As we begin our issue we see that when Comedian was thrown through the window of this apartment in the Watchmen book that he was transported to the DCU by Dr. Manhattan....... which I would love some more background on because we had a body in the Watchmen book so I'm not sure if I'm supposed to believe that Dr. Manhattan made a copy of Blake or not or since we're playing with a lot of time manipulation in the DCU right now if that means that Dr. Manhattan went back and changed history in the Watchmen Universe.  I really don't know, all I do know though is that the Comedian is alive and looking for a little payback on Ozymandias in Luthor's office........ and again, I'm not sure if we're supposed to believe that the Comedian is working with Luthor or not because we don't get a lot of exposition out of anyone here, only Ozymandias jumping out of the window and doing his best not to die as he makes his way to the street below.

Throughout this issue we have small vignettes of Nathaniel Dusk and this certain movie he was in on the TV and with what's going on in the world with the "Supermen Theory", but really, besides for realizing that Lex Luthor is in charge of created metahuman detectors that are being used around the world for both positive and negative ways....... There isn't much here that really opens up the world from what we've already seen and experienced in this title so far and while the Nathaniel Dusk scenes may play out larger as the series progresses, here they just kind of come off as filler.  As for Mime and Marionette....... well, they're free to go about and do whatever they want now that they've escaped Ozymandias' handcuffs and it's in section that we see during a fight that the Mime...... Well, he either has powers or has himself invisible weapons.  I'm not sure which, but I really hope that they're invisible weapons because I don't like the idea of characters from the Watchmen Universe having powers besides for Dr. Manhattan.  Anyway, it seems that these two are going to be looking for the Joker, which can't be good for anyone.

In the end, we go back to Rorschach and Batman, who seem to be getting along okay.  Rorschach has Batman read Walter Kovac's journal and while he does, Batman tells him to go get cleaned up and then Alfred shows him to the room he'll be staying in.  Yeah, Rorschach seems to be out of his mind from what he experienced from the faux attack that Ozymandias created and even working with Ozy now doesn't seem to be doing his mind any favors either and it's because of this that Batman tricks our wanna-be Rorschach into thinking that he's detected Dr. Manhattan at Arkham Asylum, where he swiftly locks Rorschach away.

That's it for this issue of Doomsday Clock and for all the questions that we had at the end of last issue....... Well, we didn't really get any answers here, but were left with more questions..... Which is frustrating as hell.  Really, it seems that we spent a lot of this issue with filler that may or may not come back into play as this series progresses and the rest just happened without any real reason or explanation.  Yeah, the visuals were amazing and I love seeing these characters together and interacting, but even with that it was the bare minimum of interactions that really explained nothing and really moved the story no further than where we were last issue.  So with that, this is probably my least favorite issue of the series that we've gotten so far, but even with me saying that, I can't say I hate it, I'm just looking for a little bit more out of this event right now.

Nothing is really explained and the story progresses about an inch from where we were previously, but even with that I had some fun in certain sections and look forward to getting the answers I desperately need from this at some point down the line....... I just hope they aren't dragged out completely until the end.  The art in this issue is amazing, but I find that this issue feels like mostly filler, which is a shame for the delays that this book will have coming up.