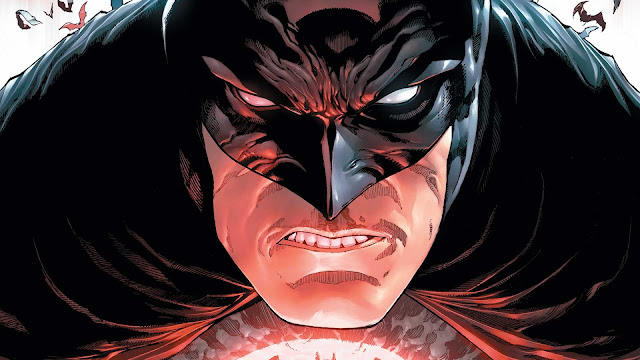 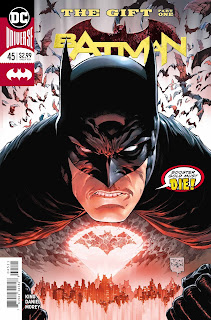 
It's been pretty clear that for the most part, Eric and I have been a little down on Tom King's Batman and Mister Miracle.  In my Mister Miracle review, I made the call out to anyone else who wanted to review it and Dispatchdcu has answered the call (after a bit of begging from me!)  If you are not aware, Dispatch does a ton of user reviews on Comic Book Roundup and they are pretty damn awesome!  Maybe after this, we can get some more reviews here as well!  So, check out this second opinion, check out Dispatchdcu and send an email and join the comic chat group (mentioned at the end of this review).  Most of all, thank you Dispatch for allowing us to do this!

Check out all of Dispatchdcu's Reviews  HERE

Welcome to the Oblivion Bar where the first round is on me and the pretzels are free! Be warned: like the pickled eggs at the bar, this issue is going to get SPOILED rotten.
We open with Hal Jordan uncharacteristically grinning, breaking ring protocol, and shooting himself in the head with his ring. We aren’t sure but it does look like he killed himself and the “grin” points us to something involving the Joker. 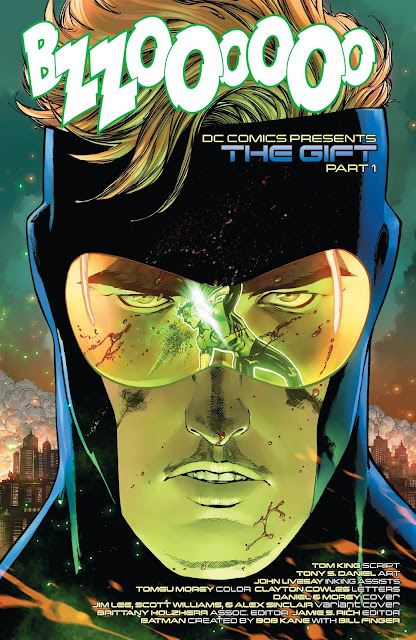 Booster and Skeets basically tell us that they got Batman a gift and go in search for him. We see that Tim Drake never became Red Robin and works for Wayne Tech; Jason Todd has his own tire business that tazes Jokers, and Duke must have been “Jokered” at one point and had brain surgery to try to fix the problem... making him a vegetable. Booster and Skeets find Batman pretty quick. Turns out, Batman is all about guns, bombs, grenades, armor, and is actually Dick Grayson. And did I mention that THIS BATMAN is amazing and I want stories about him! I wish we could explore this timeline. King, if your listening, how about a maxi black label of this universe? The art, as always, is fantastic but the Grayson-Batman art is phenomenal. Batman tries to kill Booster at least twice but fails since Skeets upgraded his suit with body armor at some point, which was a smart move Skeets! 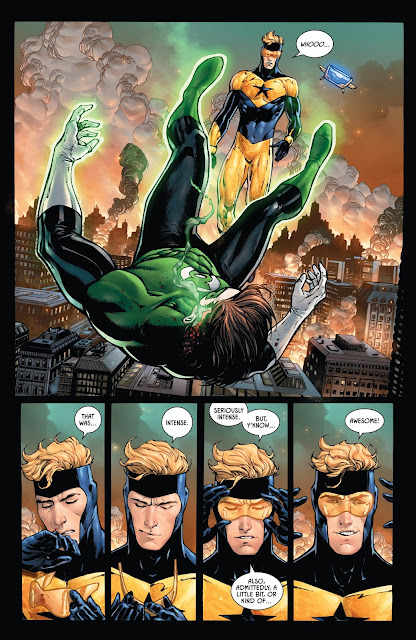 We also see that Penguin is President and Ra’s runs Europe and Asian, while Talia is the heir with no children (meaning no Damian), and somehow people become Jokers... tons of them like some form of being Jokerized but worse. And this all happened because Booster stopped Thomas and Martha from dying as a wedding gift to Bruce. Booster wanted Bruce to see how important him being Batman was. But like usual, Booster realized he made a mistake and went to find Bruce to fix it. Turns out, Bruce thought something was off and had dreams about what should have been. But we end with Bruce grabbing a fire poker and smashing Skeets so they can’t change back time. 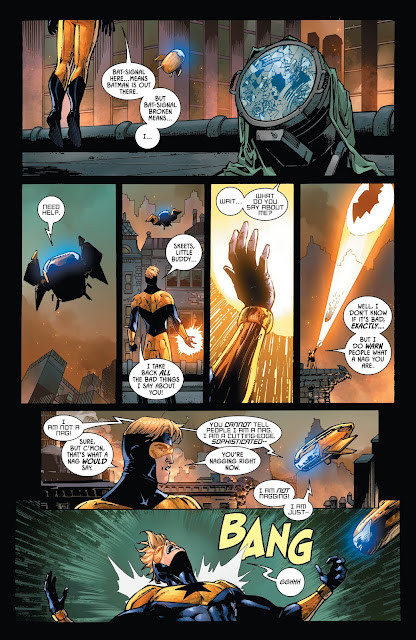 King does a great job in this issue giving us the how, the why, and the purpose throughout this issue while dropping clues about the neat changes to the timeline along the way. I’m excited to see more of the Jokers, Dick Grayson Batman, and how Booster is going to get out of this one. I also loved the banter with Booster and Skeets and think this could be a great run for King at some point too!  I also love seeing the little jokes King even takes at himself throughout his comics from Kite-man to “Bat and Cat”.

This issue was a great way to see King get back on track after the past couple issues, in my humble opinion, trying to appease his Twitter haters. This is the fun and creative King that I’ve loved from the start of this run. If you’re reading this TK, keep this up; block out the noise; and do what you do. Like Kanye said; love your haters cause they’re your biggest fans.