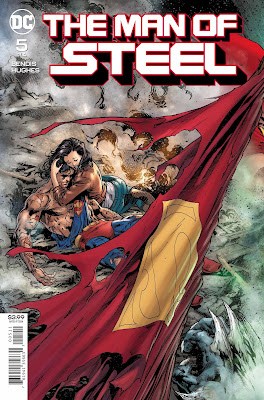 To the Moon, Alice

Here it is, folks—the penultimate issue of Brian Michael Bendis’ Man of Steel! You know, issue #5 of John Byrne’s Man of Steel, from 1986, is my favorite of that miniseries—the one with Bizarro, who plays an interesting role in the lives of Lois and Lucy Lane…I won’t spoil it in case you haven’t read it. Thing is, that issue, and that series in general, served to let Superman fans know what was being kept and what was being excised from post-Crisis on Infinite Earths continuity. Is the current series doing much the same thing? Ehh…not quite. But it is doing stuff, and some of it reads pretty well. See what I think in my review, right here!

You saw it, I saw it: in the last panel of the last issue, it looked like Superman let loose a solar flare, right on top of himself and Rogol Zaar. And it wasn’t just the puff of fire emanating from their shared position, but that Clark seemed to be “heating up” while they had their little post-Metropolis chit-chat. Either solar flares no longer leave Clark temporarily powerless, or that wasn’t a solar flare at all…maybe it was just a bright cloud resulting from some old-fashioned fist fighting. You know, like when Tom and Jerry get into a scrap, and it’s all puffy clouds and limbs while the two of them yelp at each other. Actually they never really mixed it up in the cartoons…maybe more like Yosemite Sam and Foghorn Leghorn? I know it’s a trope, just can’t think of two characters that executed it regularly. In this fictional story, however, we see Superman flying Rogol Zaar’s body up to the moon—for safety reasons, I assume—so he’s clearly not depowered or anything at the moment. By the time they get to the moon, Rogol Zaar has the upper hand and he beats the ever-loving snot out of Superman. Like, he might be dead, that’s how clocked Clark Kent was. 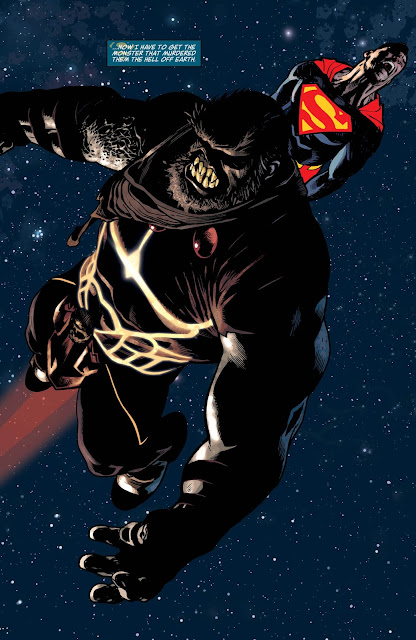 While conked out, Clark remembers just a little bit more of that scene that should tell us where Lois and Jon have been all this time, with the only development being that Jon says aloud that he wants to go with grandpa. Then, there’s a hard art change, over to the Metropolis Fire Department, where Melody Moore is following Batman’s advice and picking out a pattern among the rash of arsons that have plagued the city recently. Speaking of which, Supergirl is saving some folks threatened by fire, when the Justice League appears and asks where the hell Superman is at. I seem to remember Supergirl’s last word in the previous issue was Kandor…she cleaned up that shattered jar and microscopic citizenry already, somehow without being seen by Superman and Rogol Zaar. And now she heads to the moon to grab Clark’s form and bring him back to the Hall of Justice to recuperate. After some dicking around about a symbol that looks like the Flash’s chest symbol (but isn’t), Batman points out that if Rogol Zaar destroyed Krypton, then what would stop him from exploding another? Superman takes off from his hospital bed and drills right into the core of our planet—to find Rogol Zaar is there, setting up a gyroscope of some kind! Which we can only assume is a bomb or some kind of destructive device. 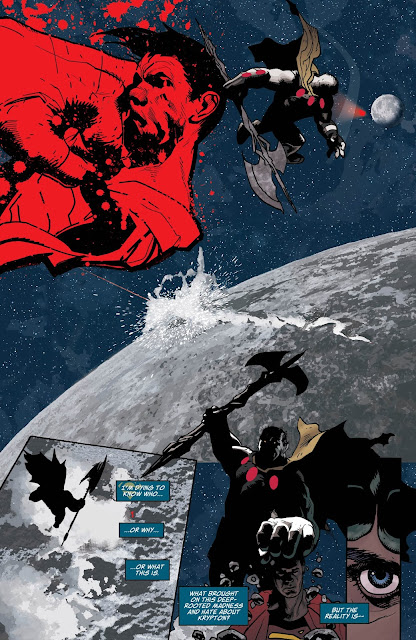 As we pull into the driveway in preparation for the conclusion to this miniseries, it looks like “I’s” are being dotted and “T’s” are being crossed, but this exacerbates the impression that these six issues are biding time until Bendis can take over Superman and Action Comics proper. I really liked the art in the second half of the book—I assume this can be attributed to Adam Hughes—but it was such a departure from the rest of the issue that it was difficult to maintain the momentum of my interest. There are a lot of good moments in this issue, but overall we conclude not far from where we began, and that’s never a good sign. Especially for four bucks. 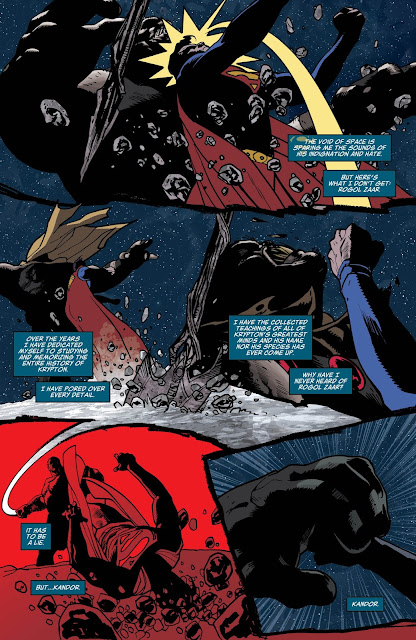 The alleged solar flare from the end of the last issue turns out to be a red herring, and this issue continues to tread water to justify a sixth issue. Frankly, skipping this miniseries entirely and waiting for the regular Superman comics to commence in July seems like the smarter idea, the further we get along.