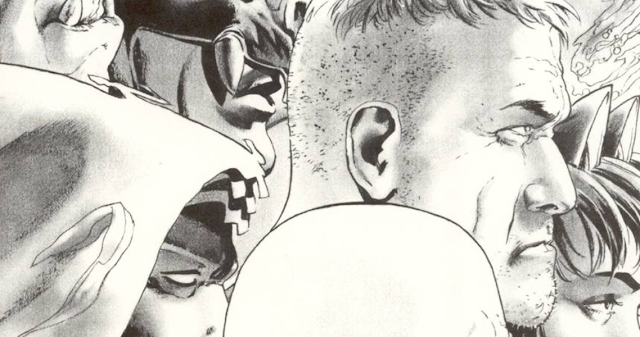 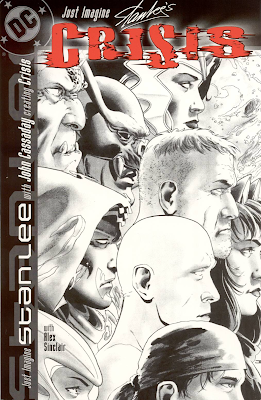 Stan Lee created a whole new(ish) roster of superhero characters in a shared universe. So what’s the next step? Have an Armageddon to kill ‘em all! That’s just what the attempt is in Just Imagine Stan Lee’s Crisis, and I’ve reviewed it right here!

I just had to show off the title page to this thing, which evokes the classic Silver- and Bronze Age issues of Justice League of America: all the members’ heads lining either side of a splash page, names captioned below. Or sometimes, the heroes and villains of the issue lining either side. All comics should start like this, forget a recap page. I want to see floating heads and names and then I’ll figure out the context along the way. Here, we see that Batman’s costume got a little redesign for the better, and there’s a few other characters I haven’t met, like Robin, and Aquaman…but no matter! I’m sure all will be explained along the way.
Events begin with Robin, who looks like a low-budget Danny Rand, being pursued by Catwoman, a hero in this universe that looks kind of like…well, Catwoman. Robin stole some hawk head idol from a museum, and Catwoman is employed as security? I guess you gotta make a living somehow. Robin escapes pretty easily, so the museum’s director summons Wonder Woman, in hopes that she can track the rune.
Wonder Woman can’t do anything, so she immediately brings forth the Greatest Heroes of All!™
Right away, tempers flare, and interpersonal beefs (of which I am unaware, since I didn’t read most of these characters’ issues) kick off between various members of the JLA. Superman has some problem with Shazam, who is a demonic ogre in this universe. Sandman, who has shown up with the body of Reverend Darrk…who has become a doctor, all of a sudden, is accused of being in cahoots with the guy, which is pretty spurious reasoning if you ask me.
Sandman then addresses the team to say that he’s been to heck and back, and there’s some baad mojo a-coming. He’s learned that Darrk was merely paving the way to bring forth his otherworldly evil master, Crisis! Which isn’t exactly what I remember him learning from Just Imagine Stan Lee’s Sandman, but okay. And didn’t he just leave Darrk’s unconscious form on the floor of the Church of Endless Elasticism? Moving on, Sandman further explains that there’s a traitor among their ranks—and unlike most mystery stories, he reveals the identity right away: it’s Robin!
Robin ain’t having it…wait a minute, Robin is here? Didn’t he just escape with a museum piece? Somehow, he’s here now, and he defends himself by casting suspicion on Sandman. Once they start yelling, Superman and Shazam square off again. It takes Green Lantern’s Yggradsil and Aquaman’s…uh, water fountain to stop folks from fighting! The Flash points out that it’s like living in a comic book, which is pretty much the worst comment that she could make.
Everyone agrees to behave and enjoin in teamwork (except for Robin, who is still being a prick), and then Darrk’s body kicks to life and tells the JLA they can never win, and that his true son will receive the Sapphire of Ranagar. Then he kicks the bucket, and at that moment a lady who works at the Orphanage for the Church of Elevator Eradication gets a purple signal. She must secure the amulet that contains the Sapphire of Ranagar. Turns out it’s being kept in some room down the hall, but as she grabs it, two of Darrk’s half-sons, Tommy Tomorrow and Mark Merlin, make a play for it!
Mark gets his hands on the amulet, but the lady sends the two of them to the Phantom Zone, which in this reality is basically limbo. There, they encounter the Phantom Stranger, who is like a red Gumby. He’s more whimsical and ethereal than the Phantom Stranger we normally know, and even pulls the influence of Darrk from Tommy Tomorrow through his mouth. He says neither of them are the child of Damien Darrk—Tommy was adopted by a dream demon, now dispatched, and Mark Merlin is the son of the wizard Merlin himself. Which he really should have known based on his surname. The Phantom Stranger says that the amulet has a bit of Crisis’ power itself, but can only be wielded by the true son of Reverend Darrk. Phantom Stranger further says that he’s the son of Darrk and Morgana LeFey, for no particular reason, and then lets the two boys go back to Earth, where Crisis has shown up.
Crisis is a Godzilla-sized, lumbering dude in a corny costume with epaulets, and a helmet that covers most of his face and makes him look like a catfish. When we first see him, two mushroom clouds bloom behind him for no apparent reason, and there are other random explosions happening around the vicinity. One of the ugliest aspects of Crisis’ corny costume is an assortment of giant gems, each on a different part of his stupid-looking armor, that must be taken down to weaken Crisis. Sandman’s dream world buddy Oracle splits up the JLA to take out each gem in turn, just as Crisis makes…time merge with gravity? What the hell does that mean? How is gravity an expression of time? Whatever it is, shop is now getting duly wrecked.
The Sapphire of Ranagar starts glowing purple, and Mark Merlin says he know who the traitor is among them. But before he can say the name—if he did indeed intend to say it—his mom Morgana LeFey emerges from the amulet, barely dressed, and…oh. Ahem. She, er…seduces her son into committing suicide.


And now, Crisis has the amulet!
Simultaneously, the JLA attacks, so Crisis sends out a psychic wave or something that makes them live their worst nightmares. It’s pretty lame, most of their worst nightmares involve their powers failing or being unable to save someone they care about. You never see that someone’s worst nightmare is a piranha squirming up your butthole and eating through your lower intestine, though now that it’s written it might become a dream. Eventually, Sandman turns on his special gem, and this puts everything in balance, erasing the waking nightmares.
Sandman again announces that there is a traitor among them, and uses his power to invasively review each members’ nightmares. Which is pretty fucked up, if you ask me. Like, how often are you reviewing people’s dreams, buddy? Is it like that one porno tape I had where I only ever watched the necessary five minutes? Sandman sees that in Robin’s dream, he didn’t move to save some woman named Beth from Crisis, so that proves Robin is the bad guy somehow?
Superman immediately lunges for Robin, but Robin grabs Sandman’s arm and uses his gem to make Superman disappear! He’s accused to killing him, but it looks like Superman is merely hurtling eternally, so that’s fine.
Then Robin turns it all around on Sandman, claiming he’s in cahoots with Crisis because his dream world girlfriend Melana is Reverend Darrk’s ex-wife…and the daughter of Crisis!
Melana confesses as much in an overly-tortured scene, then the JLA descends on Sandman, to wrench away his enchanted amulets and, I dunno, make sure no one ever dreams again? Robin snatches up one of the gems, and this destroys the stasis Sandman had created with Crisis…which I didn’t realize was keeping him in check, I thought it merely dispelled the nightmares.
Now reactivated, Crisis immediately traps members of the JLA in the gaudy gems on his huge costume, excepting Batman (who scurries away like the bat who is his namesake) and Sandman, for some reason. Also Superman, who is hurtling through space somewhere. Those threats being quelled, Crisis demands loyalty from Oracle, and reveals that Robin is his grandson—Oracle’s son—and the rightful heir of the Sapphire of Ranagar. Still paying attention? You shouldn’t bother.
Let’s go check in on Superman, who has been teleported back to his home planet of Krypton. This was his greatest wish—the very thing he hoped Yggradsil would help him do in Just Imagine Stan Lee’s JLA—but thinking about Lois Lane, and the crisis created by Crisis back on Earth, he can’t stay. He gets some Kryptonite, and uses this to contact Yggradsil, which somehow teleports him right to Batman’s side.
Batman sees Wonder Woman’s staff lying nearby and uses it like Lion-O used the Sword of Omens to reach out to humanity and harness our limitless spirit! Then Superman charges Crisis, who stuffs him into some costume jewelry immediately. But Superman still has the Kryptonite, which creates a problem for Crisis…it makes him go boom! And now the JLA is free.
Seizing the opportunity, Robin produces the hawk head idol he stole at the beginning of this issue and prepares to do…well, something important with it, I assume. His pal Beth appears and pleads with Robin not to be evil, but Robin is like, nah. I’m gonna be evil.
Batman rushes in to sock him one in the jaw, and Robin drops the idol. It shatters, releasing a green light, that turns Robin into Hawkman! And I don’t mean a guy in a Hawkman costume, but a literal cartoonish blending of a hawk and a man. It looks ridiculous, made even more loopy by the fact that he’s fifteen feet tall.
And now, everyone FIGHT!
Almost immediately, Crisis comes to and gets the upper hand, but then Green Lantern reaches out and manifests Yggradsil, or at least some tentacle branches that reach out of the ground and pull Hawkman down into the planet’s crust.
Inside, the baby Hawkman gestates and grows, and bursts back out as Atom, the creepiest superhero of all!
Atom…just sort of shrugs Crisis off. It’s pretty wack, actually. Here was this catastrophic threat, and Atom waves him away like an offensive fart. The JLA are worried that Atom will turn on them next, and let me tell you that fear is certainly grounded.
But no, Atom likes the cut of their jib, and agrees to join the JLA on future adventures, even though his membership renders the rest of the team irrelevant!
He even poses for a team photo. What a fella!
Once again, this team-based book was a lot more fun that any of the issues I’d read about singular characters. Like the rest of this series, the art was extremely high quality, and pretty easy to understand, despite there being lots of group action scenes. Much of the story was superfluous—like whatever that weird incestual death pact between Mark Merlin and Morgana DeFay was about. Most of the characters were either redundant or had little to do while this Earth-shattering cataclysm occurred. I never really understood what was really at stake here, and the actual character Crisis looked silly. Still, there was some good superhero punch-em-up action here, and I learned enough about the characters I hadn’t met to follow along.

This heralded crossover event is decent for a dud. The big threat is laughable, several characters have nothing to do, and the big "twist" is revealed right at the beginning of the issue. But, uh, there's good punching and stuff.