Hal Jordan and the Green Lantern Corps #43 Review and **SPOILERS** 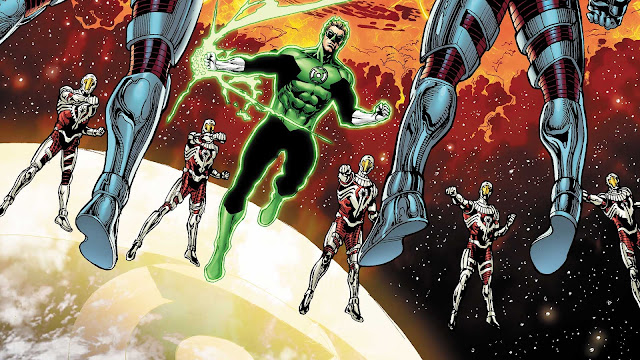 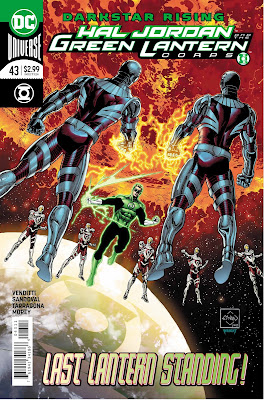 So the Darkstars are in town, and I assume that’s going to put some starch in the Green Lantern Corps’ crotch. How do you think they’ll handle it? If John makes the call, they’ll stand around and talk about it for two to three issues before reacting defensively. If it’s up to Kyle, he’ll moan about it to whatever females are nearby. Guy would want the Corps to swarm the Darkstars, but without the luxury of rings, instead tangling them hand-to-robotic claw thing. And Hal would already be on the front lines, alone, slinging missiles and fighter jets at the Darkstars with all his might. So what actually happens in this issue? Place your bets and find out by reading my review of Hal Jordan and the Green Lantern Corps #43, in that order!

When the Lantern Corps expanded to include the “entire” emotional spectrum (I don’t see any Lanterns roaming space wielding “bored horniness,” for instance), the nature of justice in the DCU changed. Used to be the Green Lanterns were space cops, what they said was right, and they operated with impunity to punish folks for crimes against property and sovereignty. But when you’ve got a Lantern Corps out there wielding the power of love, then things get fuzzy. Is it a crime to steal if you worship the avatar of Greed? Is it wrong to smite someone in the name of true love? The multi-colored Lantern Corps—known as “Skittle Lanterns” to many—imbued the DCU with moral relativism, instead of clear-cut concepts of right and wrong. 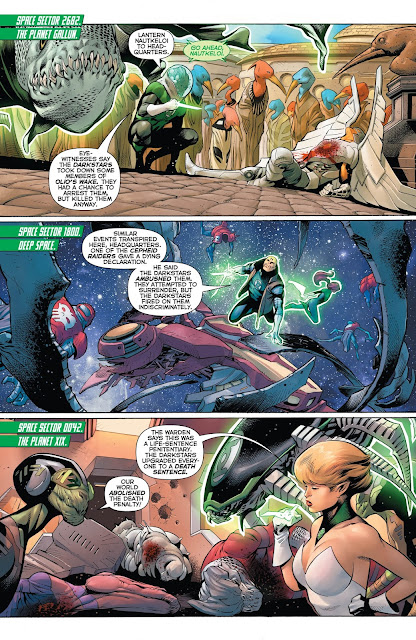 With this in mind, maybe snatching up criminals in novelty handcuffs made from green light constructs and dumping them indefinitely into “ScienCells” (“The Only Prison Powered by Science!”™) isn’t the best way to go about building a safe interstellar society. For one thing, ScienCells can be broken out of. And with that in mind, incarceration isn’t really that strong of a deterrent: you get three square meals and a bed (or the equivalent for the race and species), you can hang out and taunt Green Lanterns all day, and if you hang around long enough there’s bound to be a big break out. No, we might be better off as a galaxy if our worst offenders were excised from society entirely. 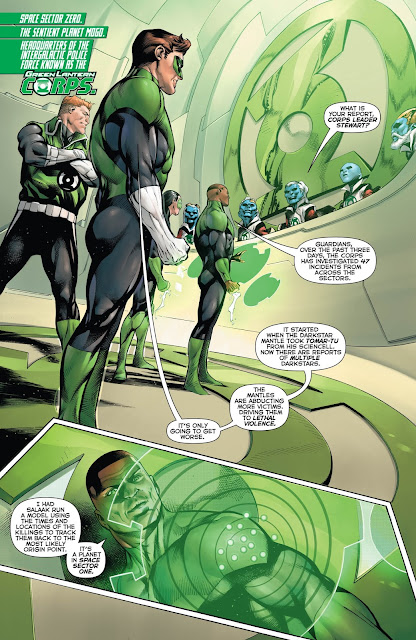 This is more or less the argument Tomar-Tu, now the spokesperson for the Darkstars, posits to Hal Jordan, who then brings it to the Corps body for consideration in order to kill more pages. He tells Hal that he and the voluminous Darkstars, linked by the Controllers who now serve them, will be killing baddies around the Galaxy for the foreseeable future. And all the Green Lanterns need to do is stand aside. Let this more final form of justice be meted. And you know what? After talking it over with John Stewart and the Guardians, they agree to let the Darkstars continue their brand of strict law. 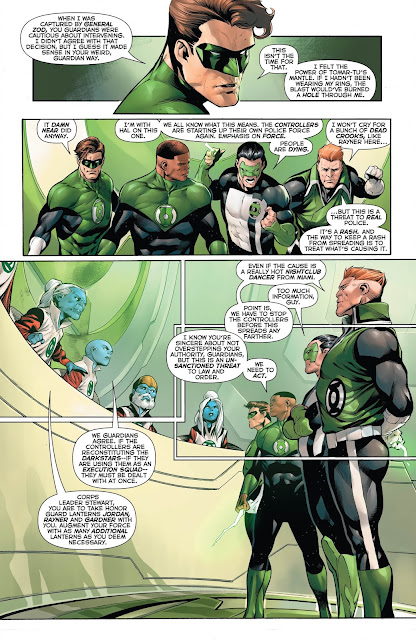 And it doesn’t seem a very…Green Lantern thing to do, quite honestly. These are extenuating circumstances, however, and as they can clearly see when Mogo is ringed with them, the Darkstars far outnumber the Green Lantern Corps. But still, the chips have been stacked against them before, and if there’s anything to be said about Hal Jordan and Guy Gardner, it’s that they’re a couple of hotheads who will fight against ludicrous odds, to their total peril. This issue has my favorite art team, and it looks terrific, but it does seem to reiterate everything we learned last issue, and adds a little bit of new story by way of Tomar-Tu’s deal with the Green Lantern Corps. Nothing huge to complain about, I’m just strapping in for another bloated six-issue arc that will leave me bored by the end. Prove me wrong, Vendetti! 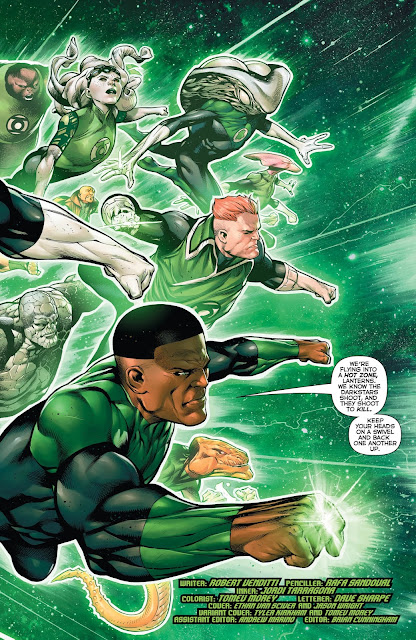 Tomar-Tu and Hal Jordan have a heart-to-heart that reiterates much of what we learned last issue. Then Hal Jordan tells John, Kyle and Guy about his conversation with Tomar-Tu. I expect the information will get passed along several more people, until someone's like, "Tomar-Tu wants a purple monkey dishwasher???" With artwork like what we see in this issue, I can overlook some redundancies.