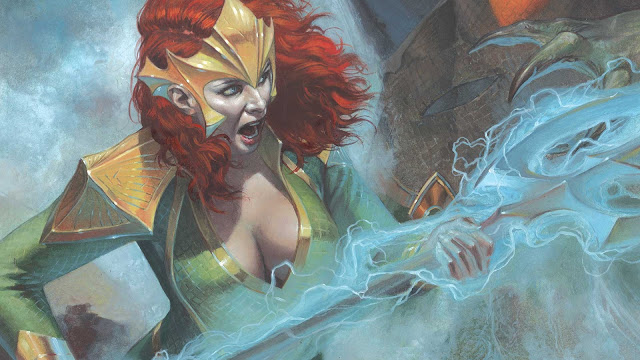 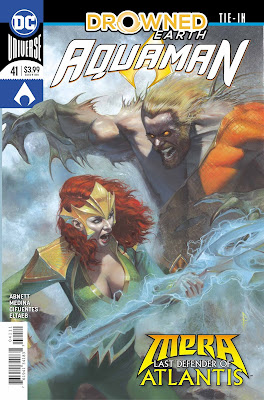 Water is Strange When You’re a Stranger

Well, Atlantis is high and dry, part of the air-breathing land walkers that they hate so much…what’s that? You say there’s a new event this November and Atlantis gets drowned again? But it only just bobbed to the surface! Fine, then—let’s see what’s happening in Aquaman #41, you can find out about it in my review.

Our boots barely dry from the last crossover, and this series is plunged yet again into another tie-in event: Drowned Earth! Ostensibly a Justice League thing, it’s going to be coursing through a few titles this month…mainly those being written by Dan Abnett. So before reading this issue, it’s gently suggested that you go read Justice League #10, wherein Aquaman goes looking for Poseidon’s corpse in the Antarctic or something? Anyway, he releases Flood, a other-worldly monster that, well, floods the planet with water that mutates any being it touches. So that’s where we are now. I’m not sure if this will conclude the “Strange Water” story that Dan Abnett began before Rebirth, but it would be nice if it did. 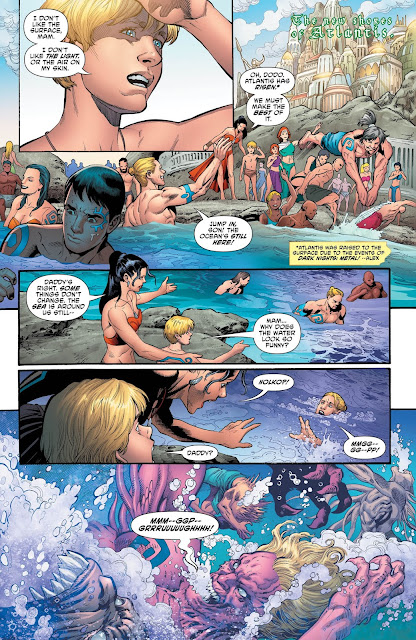 Atlantis is topside, if you’ll recall, and its inhabitants are enjoying the newness of “going for a dip” in the water, as opposed to just being in water all the time. Then, the mutating water shows up, and Atlanteans begin to turn monstrous and attack everyone around them. Murk tries to hold them back, but he gets tainted. Mera attempts to hold back the waters all around Atlantis with her powers, but they eventually falter as well. Meanwhile, Aquaman is speaking to the three celestial water Satans that are causing this flood, and Batman communicates to Mera that the world is pretty much underwater and there’s an armada of spaceships poised to attack. She just became Queen of Atlantis, folks, can you give her a minute? 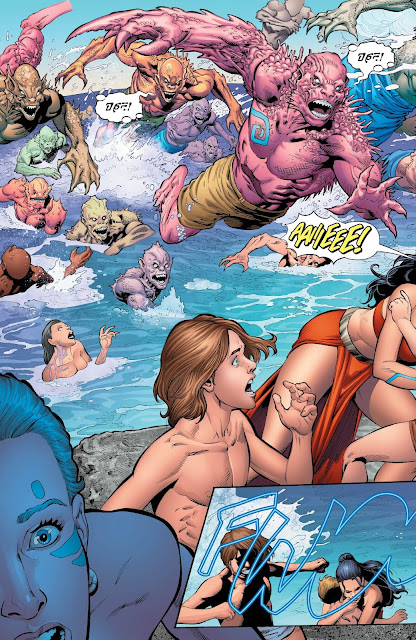 Batman keeps calling for Mera to break off and come to the (water-tight) Hall of Justice, but she insists on staying with Atlantis, long past the point that it has totally fallen. In the end, she can create only a barrier around herself to keep the offensive waters at bay. Then she remembers that they’ve got someone kept in a high tower that might be able to help! No, not the Man in the Iron Mask, but Orm, the Ocean Master! Though last time he met his sister-in-law, they fought to his defeat. I wonder if he’s still mad about that? This was the best-paced issue of Aquaman that I can remember reading for a little while. As Mera kept having to condense the sphere of her power’s influence, I really felt the stakes raise, and wondered if Mera herself might fall to mutation. The way the flooding is rendered, the armada of ships hovering over tumultuous waters—it looks absolutely terrific, and scary as hell. My only misgiving is that with all of this cool stuff whooshing by, there isn’t much to tell about in the end. Still, it’s worth the cover price, and that’s what I’m here to advise about! 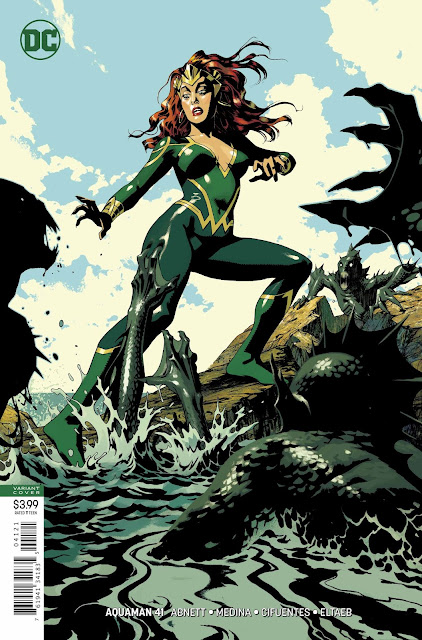 This issue is a rollicking, fun read with lots of peril and hopelessness--just the way we like our comics! The story within is a little short on content, but the impressive visuals more than make up for that: you'll want to linger over these panels again and again.