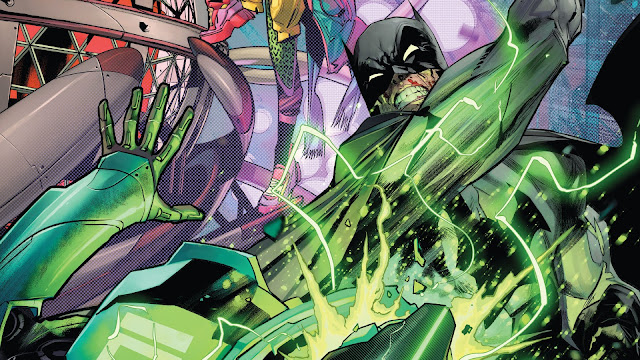 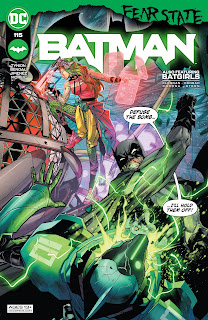 Writer: James Tynion IV, Becky Cloonan
Artist: Jorge Jimenez, Jorge Corona, Bengal
Cover Price: $4.99
Release Date: October 19, 2021
I am still waiting for this Fear State thing to start.  What, you say it started issues ago, even with a Fear State Alpha issue?!?  It's had multiple tie-ins already?!?  I guess I'll take your word for it, but someone needs to get on the horn to James Tynion and tell him that!  Just dial 1-800-Sub-Stak, and they will surely put you right through.  While we wait for you to do that, we will jump into this week's Batman issue where surprisingly, not much happens.
The issue opens up with Simon Saint losing his shit over Ricardo's untimely demise.  That's an odd swerve from the end of the last issue where he demanded that they blow up Ricardo and his expensive Peacekeeper-X suit even as his assistants pleaded with him not to do it.  Then when he gets a call from Mayor Nakano, he runs off like a scared kid.  Remember, Simon Saint is one of the major villains of Fear State. 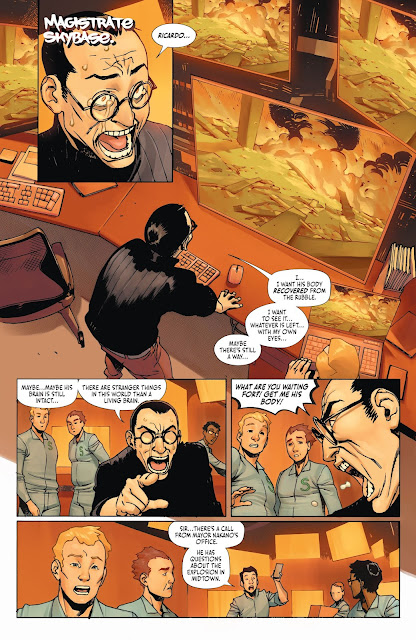 I have a lot of problems with Fear State as a whole. First, not seeing real Gothamites dealing with any of this is enormous.  Tynion keeps telling the reader that the city is in a panic, but we never see it.  Another problem I have is trying to figure out who is the actual villain.  Simon Saint and the Magistrate?  Scarecrow?  Anti-Oracle (suddenly going by the name Seer with no explanation)?  Simon Saint comes off as an incompetent boob who is afraid of his own shadow most of the time, and Scarecrow's focus on just Peacekeeper-01 has diminished his overall impact on the story.  Seer is doing the most lately, but it's more of a personal emphasis on Barbara and the Bat-Family when this is supposed to be a city-wide thing.  Well, there is always Queen Ivy.  Why not?!?  She feels like an equal threat to both the good and bad sides.  My point is, there isn't a main villain here because, like every damn issue of this book in the past year, Tynion has to introduce too many characters for one story to handle appropriately!
Speaking of too many characters, we head down under (no, not Australia) and find out that Queen Ivy has a soft side, and Master Wyze worked with Jervis Tetch back in the day.  Just like Ghostmaker's history with Scarecrow, this is only a shortcut around an actual explanation of how Wyze has Mad Hatter tech.  It keeps feeling more and more like Tynion is desperately trying to flesh out the 1,452 characters he threw into this book before he leaves.  Sadly, that is all at the expense of getting much of the guy most buy the book for! 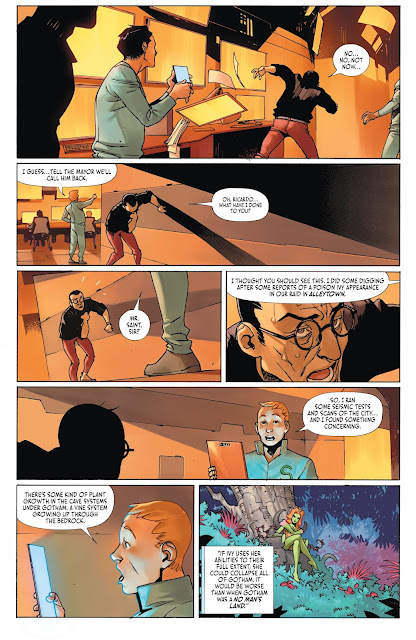 Speaking of that guy, Batman is busy telling Miracle Molly that he is mad as hell and he's not going to take it anymore.  The art shows the Bat-Family, and it's a good summation of the event so far as most are standing around doing nothing much at all.  My favorite is Nightwing scratching his head while Barbara puts on a glove.  Fear State! 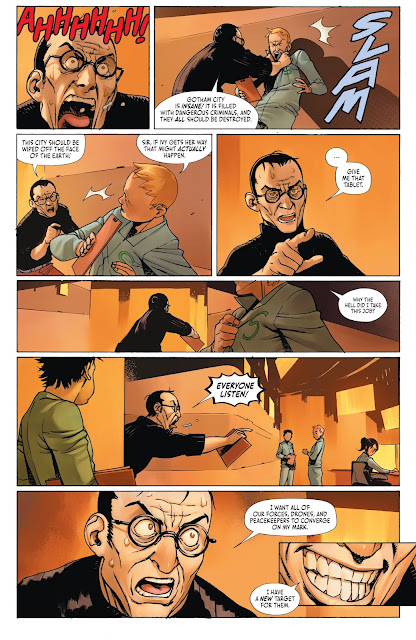 This leads to the importance of Master Wyze's mind wipe machine that will undoubtedly be used on Seer by the end (she knows way too much!), but if the Scarecrow has his way, he will deliver a Trauma Bomb on Gotham.  What?!?!?!?  So, after all this psycho-babble about papers and theses and getting respect, Scarecrow is just going back to what he always does?
After a fight stretched so far I thought it might snap, we end the book with Scarecrow chilling with Peacekeeper-01 and Simon Saint yelling for Queen Ivy's head.  Two inches forward we go.
There is a Batgirls backup by Becky Conrad, Michael Conrad, and Jorge Corona, and I hope this isn't a sign of what's to come in their upcoming run with the girls because this was eight pages of nothing. But, at least it fits in well with the main story.
There are two more issues left in Tynion's Batman run, and unless he is a miracle man, this Fear State story will mean he is going out with a huge dud.  It's more tedious and inconsequential than anything, but that's horrible considering it's DC's big book, and so many other books are are along for the shit show.  I liked the art, but I wish both Bengal and Jorge Jimenez had more to do.
Bits and Pieces:
This book looks good, but there is barely a story going on and what little we do get is boring.  Tynion can't decide who the main villain should be, and almost all the significant plot developments get forced in.  Fear State keeps becoming more and more a mess as it goes on, and that is not a good trend at all.
5.0/10
Posted by Jim Werner