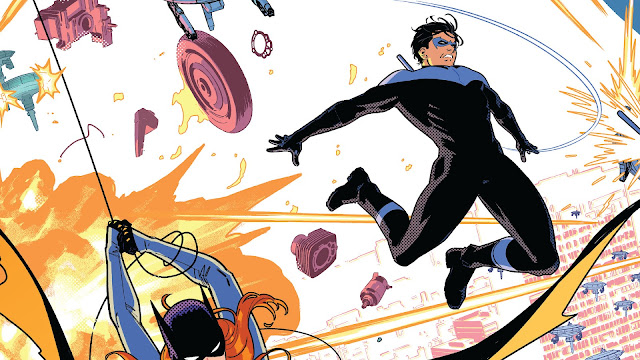 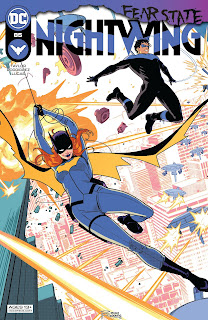 Writer: Tom Taylor
Artist: Robbi Rodriguez
Cover Price: $3.99
Release Date: October 20, 2021
I have not enjoyed Fear State much overall, and that goes for the tie-in books and the main Batman title.  Maybe I should say I am not enjoying the tie-ins because of the main title because James Tynion's lack of any forward progress in the Batman book has to be hampering books like this one.  Still, Tom Taylor is a great writer, and he tries his best to make due.  Let's see how he does in this issue.
Tom Taylor has been relying on fan-service moments and flashbacks since taking over Nightwing.  It's been wildly popular, so why stop now?  That is what saves this issue overall. 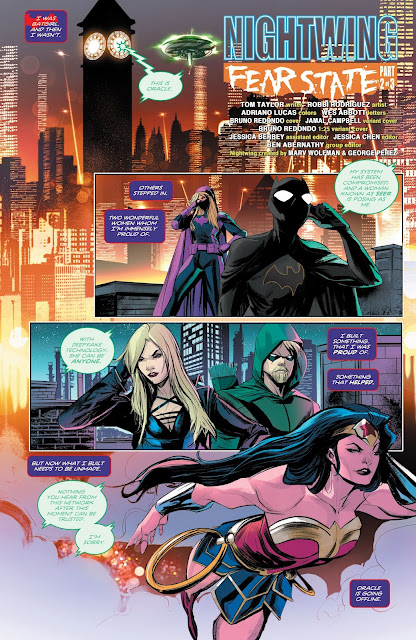 We start with Barbara sending out the message to everyone (even newly returned Wonder Woman) that the Oracle Network has been compromised and can't be trusted.  This is a bit of a party foul from Taylor as a story like Fear State relies on the fact that the whole DCU won't be helping out. But, seriously, why wouldn't Wonder Woman, Black Canary, and Green Arrow immediately get involved?  Who else got the message?  Fear State would no doubt be over... before it even felt like it started.
Taylor leaves that quickly to deal with Anti-Oracle Seer, who knows way too much about the Bat-Family for comfort, and the leak goes right back to Barbara.  I wonder if this will have any repercussions after Fear State because it has a contingency program feel to it.
The only way to take down Seer is to shut down Oracle 2 with the help of Tim Drake.  So Babs calls him, and even though she told nobody to listen to any communications from her, he does, and Dick and Barbara go off to meet him. 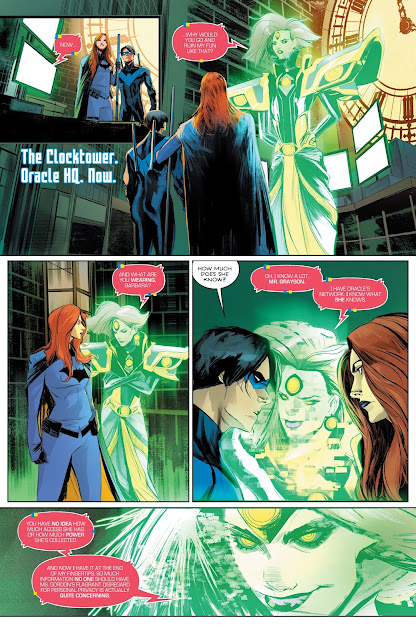 But first, we get a flashback scene that is nice enough but is not very important in the scheme of things and is just a variation of a scene readers would have seen a thousand times by now.  Again, though, I'm not going to blame Taylor since he has to fill page space with very little Fear State wiggle room, and people have been eating this stuff up lately!
After a generic fight against Peacekeepers, they get to the Oracle 2 warehouse, and things go south.  I am not going to spoil anything but it's more fan service, and depending on who you want Dick with, you'll either love it or hate it.  I loved it, by the way.
The issue ends by showing where Seer is hiding out before a big explosive cliffhanger.  Oh no!  It looks like a couple of characters staring in a newly announced series will never make it there because they are dead!!!  Yea, that's not happening! 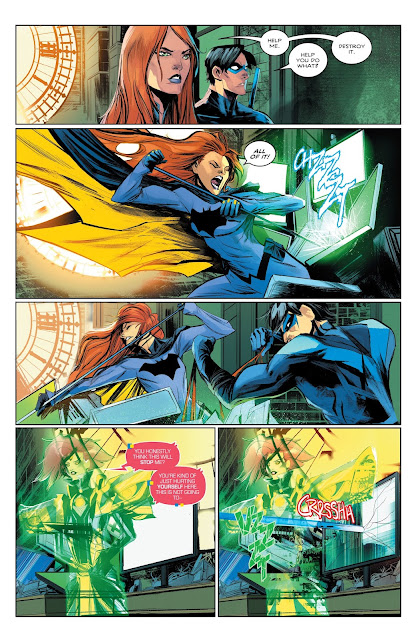 This issue was okay.  Tom Taylor manages to get a few things in here that Nightwing and Batgirl fans will really enjoy. Overall it's more of a Batgirl issue than a Nightwing one, but I can deal with that.  I liked Robbie Rodriguez's art more than the last issue.  Maybe it just took me an issue to transition from Bruno Redondo.
Bits and Pieces:
The Fear State story doesn't give Tom Taylor a whole lot of Nightwing things to do, so he teams him up with Batgirl and lets the fan service roll.  I don't blame him since people love it so far, and there are a couple of big moments in this issue.
7.5/10
Posted by Jim Werner