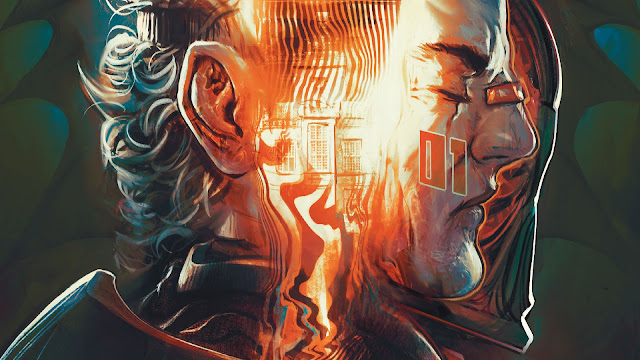 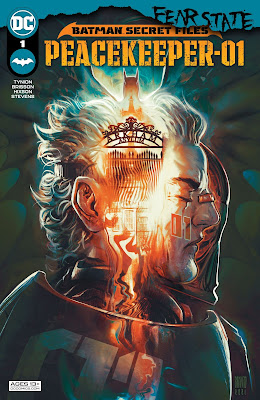 It's time for another Secret File and this time we're going to be exploring the background and present of Sean Mahoney, Peacekeeper-01. These Secret Files feel weird because while there are some interesting new or underutilized characters throughout Gotham it feels weird that the way we're getting their information is through one-shots instead of actually being able to have some background on them in the stories that they're coming out of but maybe for the way that those stories are being written this is the best possible way to understand what's going on with the character involved. Let's jump into this issue and see if we can learn anything new about Peacekeeper-01.

This issue of Batman Secret Files feels a bit weird because while you will learn some new and interesting background stuff about Sean Mahoney to see what has driven him to become the character that we know from Fear State, it seems that this interesting background stuff wasn't enough to fill out an oversized issue and we have to see a lot of the same kind of stuff that we have throughout the Batman books where Sean Mahoney is just walking through Gotham all crazed up on fear toxin while Simon Saint and the Magistrate try to talk him down and or take him down. This is a really weird choice because it breaks the momentum of the interesting background things that are being explored in this book that while don't make Sean Mahoney and his past sympathetic in any real way, does at least make him understandable. 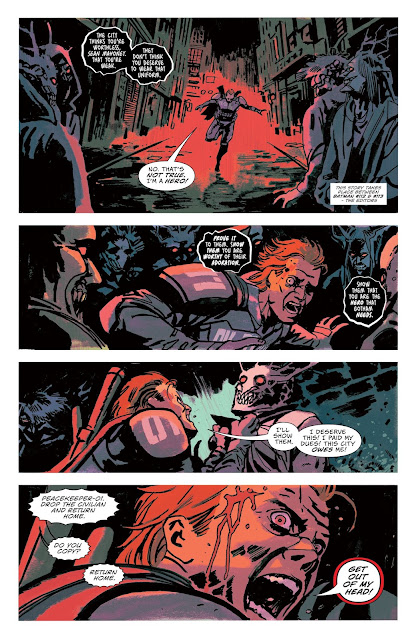 There's some really cool stuff dealing with the Mahoney family and their connection to Gotham and where they were in the background of what was going on in the city when Jim Gordon became Commissioner, not to mention this book also shows us how Sean Mahoney is not the hero that Gotham needs in more than Harley Quinn previously telling us that he used to beat up on the inmates at Arkham but what he was actually up to during the attack on A-Day. There's some pretty decent stuff here, but the current day stuff feels boring because there's nothing new and by the end where we actually do get something new to Peacekeeper-01's story it feels off because Sean doesn't seem to be affected by the fear toxin anymore. 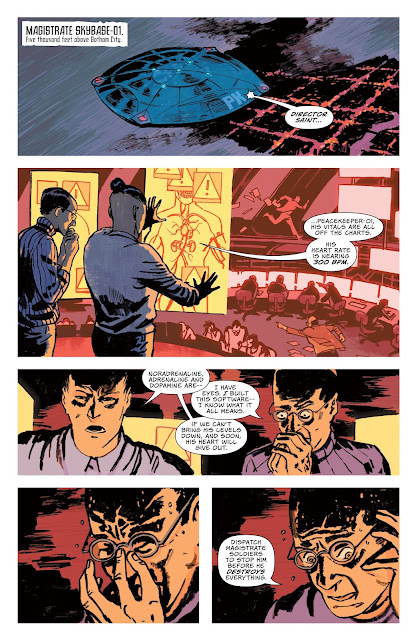 All in all, the art was okay but wasn't something that I thought was amazing by any stretch. It was just something that threw me off at first but eventually, I got used to it. The story on the other hand is a complete mixed bag where it goes back and forth between being interesting and simply old hat to pad out the book and by the end, I'm not completely sure how or why anything goes down for how out of his mind Sean Mahoney has felt up until this point but even with the lack of understanding this end bit for this character was a decent conclusion to this book for everything that Tynion and Brisson had built up. We've got an issue or two left from the main Batman title for Fear State and getting this information about a main character now just feels weird though and I don't know if a lot of people will ultimately care about the past of Peacekeeper-01 with where we are in the story....... maybe I'm wrong though.

While I can't say that the art is my favorite part of this book, it became something that I got used to by the end. The story though felt odd because of how much we've dealt with Sean Mahoney and with this realizing that we really don't know anything about him and what we do learn here, while interesting is interspersed with stuff that we've already seen this character do throughout Fear State so ultimately we're left with an issue that's only half-interesting with art that wasn't that great overall.