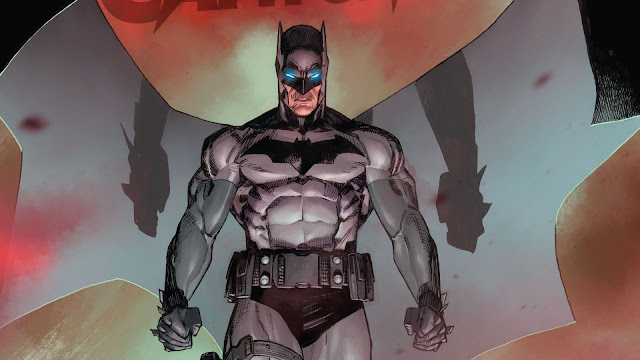 The Joke's On Us 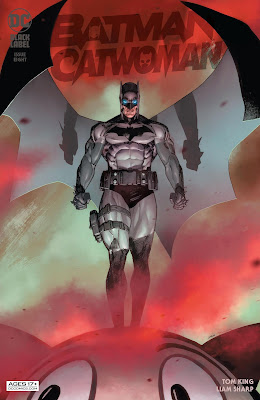 The three time-lined mess that is Batman/Catwoman continues with this issue where we'll hopefully find out what happened at the end of the previous issue, where Catwoman and Phantasm teamed up to murder the Joker only for our Clown Prince of Crime to whisper something into Phantasm's ear that got our Angel of Death to turn on Selina and amscray with the Joker. That's all that really matters in my mind but in the future we have Selina arrested for the murder of the Joker and in the past...... Selina and Bruce were banging after Bruce smelled Joker in the air...... gross. Let's check this issue out.

In this issue, we do have some continuation of the Joker and Phantasm, where the two terrorize a family so that we have can have one piece of dialog from Phantasm that possibly thinks it's doing something to blow this whole story wide open, but because we literally knew nothing about this character for the past 14 years and can only rely on the Mask of the Phantasm animated movie, this reveal doesn't feel like it's some kind of big revelation and I'm not even sure how I'm supposed to feel about it as a whole and the problem with this is...... it's the main point of the book. 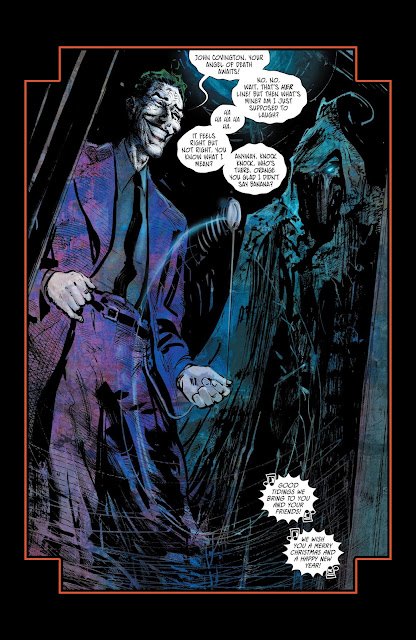 While the present-day stuff is possible trying to do something this issue the past and future parts are doing fuck all as it really just feels like it's there as padding because the past just continues to make Selina Kyle look terrible because of her friendship with the Joker, while the future maybe has something that someone can latch onto since we had The Joker's dead body flown back to Gotham for absolutely no reason to further some crazy nonsense, but even this portion of our issue spent most of its time with Commissioner Dick Grayson talking about smoking a pipe and saying "chum". 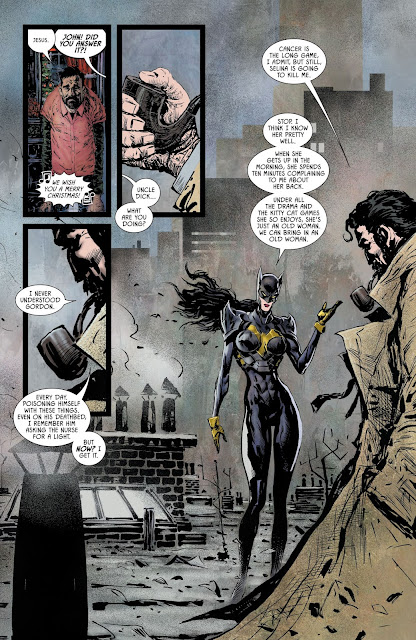 All in all, I wasn't a fan of Liam Sharp's art this issue and while I'm not the biggest fan of his in general, I thought that the previous issue came off better in the end and for some reason, this one felt uneven with his style. As for the story... Well, the past story feels tired and seems like it refuses to do anything overall and while the main story feels like it's actually moving towards something, what we get here feels confusing and I don't know what I'm supposed to take away from the big reveal. As for the future story, I'm sure it's going somewhere with the Joker's body but because we really haven't done anything with the characters in that time beyond kill the Joker I don't know who would care overall. This book is getting tedious and the art of this issue ultimately felt lacking overall.

It seems like this story is finally trying to find its point but by the reveal that we get here, I'm still not sure what that could be. The timeline transitions are getting back to being ridiculous in trying to follow and the past and future stories just feel like a way to pad at the issue at this point because they spend so much time not doing anything. Man, this is a rough series.