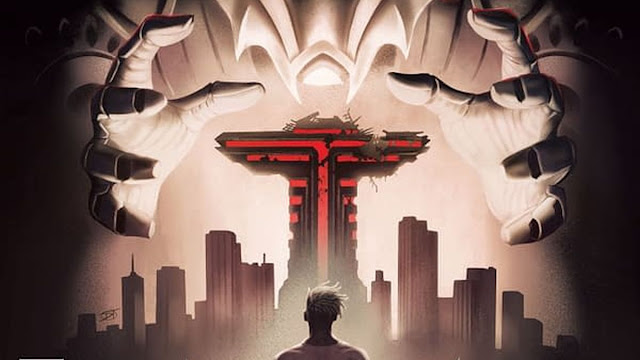 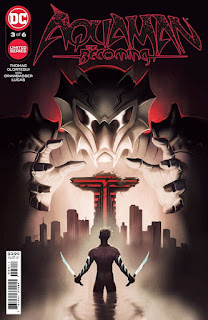 Aquaman: the Becoming #3 finds Jackson Hyde on the run from Atlantean security forces, trying to find a moment to heal and breathe. When he manages to make it all the way to the abandoned Teen Titans Tower, the mysterious figure who framed him is revealed.

This was a fairly solid issue in the series filled with twists, turns, tension, and a surprise reveal at the end that you won't see coming.

In terms of types of story, this is your standard "Chase" plot. Jackson is on the run from Atlantean security but only able to make short teleporter hops along the Justice League "trapdoor" protocol network.  I like the idea that the JL has an interconnected network of safe houses where a hero could find a temporary respite for healing, provisions, and emergency communication. In truth, I want to know more about this teleporter-connected safehouse network, and the concept is a little more interesting than the story going on here. 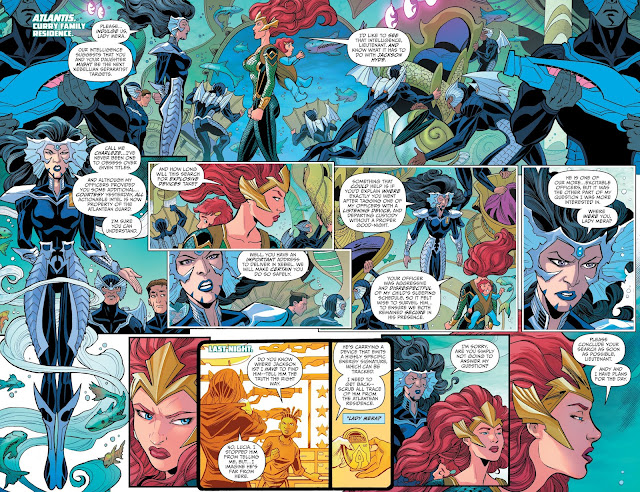 That said, the story is filled with tension as Jackson is chased from one hop to the next. Somehow, the Atlantean security forces are always a step or two behind him, but it's not clear how they're able to find him. That point was a little confusing. The chase is exciting enough on its own as long as you don't dwell too much on the how.

When Jackson gets to the last stop on the teleporter tour of America, he's confronted by the masked figure who set him up in the first issue. I won't spoil it here except to say it's a new character, the connection to Jackson immediately instills an emotional gravity to the situation, but the reveal may be a little too much like soap opera shenanigans for some readers. Personally, I didn't mind it but it did feel a little cliché. 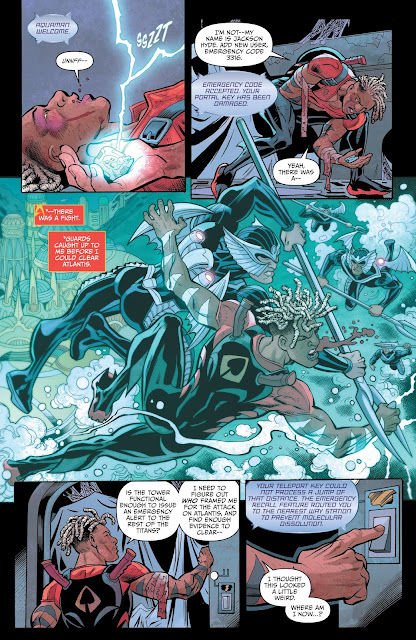 I generally liked the art in this issue. Koblish and von Grawbadger have a good eye for panel composition and action. The one visual point that comes across a little odd is the use of very thick black outlines around all the characters that make them look like they're slightly separated from their surroundings. It's a fine design choice but it causes the characters to stick out from the panel in an inorganic way.

Bits and Pieces
Aquaman: the Becoming #3 is a tense chase story following Jackson Hyde's attempts to get away long enough from the forces chasing him to figure out who framed him and why. The mechanics of his escape drop a nugget of information about the inner workings of the JL that's as interesting as the conflict in this arc. The reveal of the big bad is surprising but may be a little too much soap opera for some tastes.
8/10
Posted by Gabe Hernandez