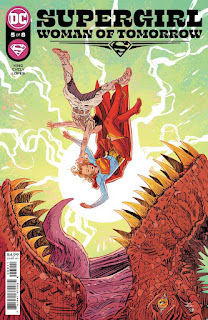 Under the Bright Green Sun

Supergirl: Woman of Tomorrow #5 takes one step closer towards Ruthye and Kara catching up with Kem when they take a billion steps back to the other side of the universe via a magical trap. Where they end up is a Kryptonian's worst nightmare, and it's up to Ruthye to take on the role of defender.

After nearly a 2-month break, we're back with the next stirring installment of True Gri... err, I mean Supergirl: Woman of Tomorrow, and it's a very well done issue with one glaring down point. This issue is complete filler and has no purpose in existing other than to demonstrate that Supergirl is ten times tougher than Superman.
Okay, sure. Whatever floats your boat.
When last we left Ruthye and Kara, they had just missed Krem (again) after he helped to commit the atrocity of racial genocide. Now, Kara and Ruthye are mere steps away from nabbing the evil-doer when he unleashes a teleportation orb that sends the duo to the other side of the universe to a planet known to Superman and the Justice League as Barenton. A planet constructed with a Kryptonite sun for the express purpose of trapping and killing Superman.
Before Kara gets too weak, she explains how she'll be fine if she can make it to sundown. However, when Superman was first transported to Barenton, he only lasted 45 minutes before the JL rescued him. Unfortunately, Kara has to survive ten hours before the planet's rotation reaches sundown. 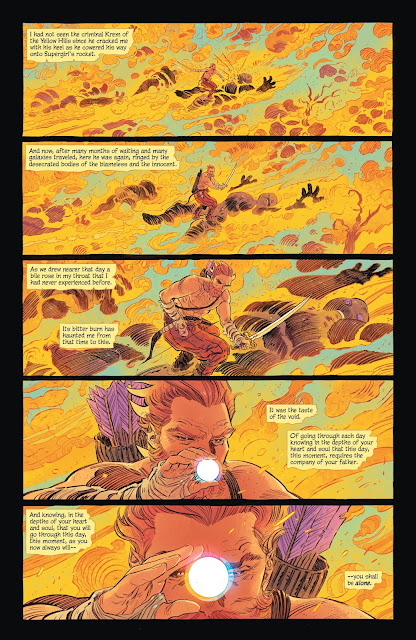 And that's the setup and pretty much the entire issue. Can Kara last ten hours when Kal El only lasted 45 minutes? Can Ruthye defend a useless Kara  with her tiny sword from onslaught after onslaught of vicious dinosaurs? Of course, the answer to all of the above is 'yes', or else this mini would have been cut very short.

As you can tell the setup is simple and the plot is as straightforward as it is predictable, and again, this is filler as it adds nothing to the overarching arc. The question then becomes "is it entertaining?" Largely, yes. That said, this story's lack of value for the arc made it feel like something you read as a backup story to some other main title. 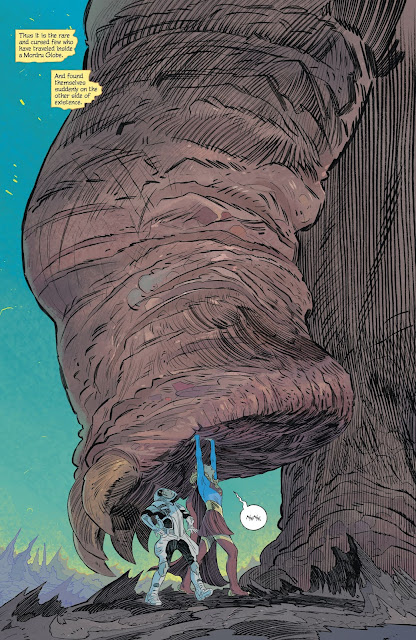 More precisely, if you remove Ruthye and replace her with any other character, this reads precisely like a backup story or an entry in an anthology. It's well-written, the art is gorgeous, and it definitely holds your attention, but none of that stops it from being perceived for what it is - filler.

Bits and Pieces
Supergirl: Woman of Tomorrow #5 traps Supergirl and Ruthye on a planet deadly for Kryptonians to ask the one question on everyone's mind - how much tougher is Supergirl compared to Superman? With deadly dinosaur designs and generally gorgeous art, the issue looks great and reads even better. However, it's a pointless filler that belongs in an anthology. Not in a limited-run arc that's halfway done.
7.5/10
Posted by Gabe Hernandez