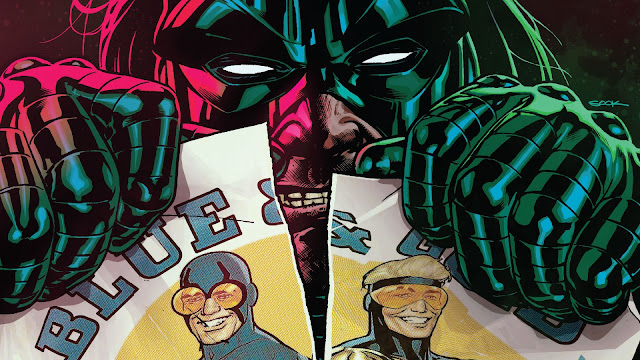 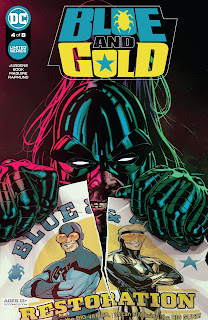 Writer: Dan Jurgens
Artist: Dan Jurgens, Kevin Maguire, Ryan Sook, Norm Rapmund, and Rob Leigh
Cover Price: $3.99
Release Date: November 16, 2021
I love Booster and Beetle and am so glad we are getting an eight-issue mini of them doing good, old Blue and Gold stuff.  However, I need things to pick up a bit here at the halfway point because just having the boys back in town is wearing a bit thin.  Hopefully, this is the issue where things start hitting, and maybe, if I am lucky, Dan Jurgens stops it with the social media comments because, boy, are they distracting as hell!  Spoiler alert, I am not very lucky! So, let's get into the review...
The issue opens up with Booster and Ted doing their first extensive interview for their new venture, and things are going quite well.  That is until Booster starts talking about their Justice League International days, and a bit of an argument over who saved who's life comes up.
We go to a flashback of Booster's first days on the Justice League, which is some cool fan service. But, of course, any JLI reference has to include Guy-Bats one-punch talk, and it's here.  I'm sure some fans will get a chuckle out of it all, but it's kind of the reason I think I'm not having as much fun with this book overall.  Dan Jurgens is still in the "I need to show you how fun these characters are" mode and isn't giving us new moments through more of a story. 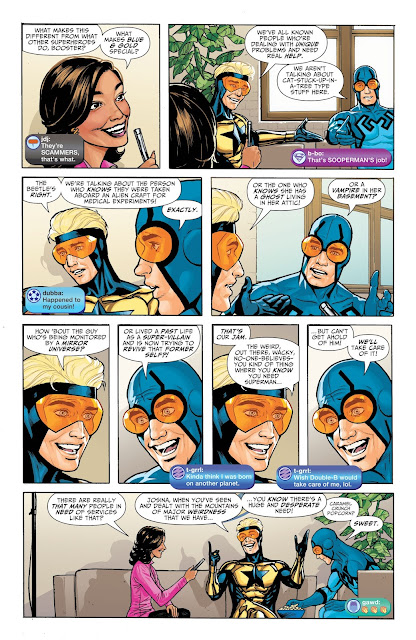 We get to see the version of the story told by Ted and then by Booster while the interview falls apart, which is no real shocker to anyone involved.   However, Princess Omnizon must have gotten herself out of the swamp she ended up in and is watching the broadcast, and we get meaningless social media comments like "neither of them is Sooperman" and "Boostie is not a huckster!"  I hate seeing this bullshit in my regular daily life, and here it is somehow more irritating!
The problem is, there isn't much else going on in this issue. So we end up stuck in a vortex of differing flashback scenes, each making whoever is telling it the hero, and unfortunately, it got a bit monotonous.  Then Guy Gardner arrives to show everyone what actually happened, and boy, the well is dry as a bone by then.
The issue ends with people lining up to get some Blue & Gold help (not sure why they would come after that), but Princess Omnizon shows up to remind us that nothing much has happened in four issues of this eight-issue mini-series. 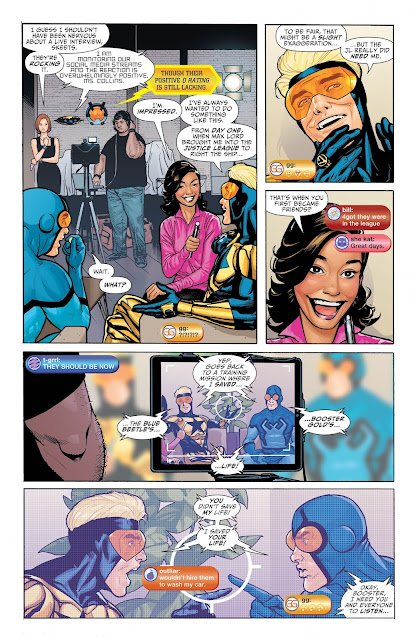 This is an odd book.  Dan Jurgens created Booster Gold, but this issue solidifies (for me at least) that he is trying to tap into the Keith Giffen/Justice League International humor and is failing miserably.  While that book was fun, fresh, and even a bit dangerous feeling, this feels generic and even desperate for laughs.  Now, having Kevin McGuire on art on the Blue Beetle JLI flashbacks is incredible, and I  always love seeing Jurgens art as well, but this feels better suited to an Anniversary celebration type thing than the middle of an ongoing mini.  Jurgens is a great writer, but maybe this book would have been better suited for someone like Chip Zdarsky or even Mark Russell because it's falling flat for me, at least.
Bits and Pieces:
Not much happens in this issue overall, and at the midway point of the mini-series, that's a problem.  Dan Jurgens tries to get the Justice League International vibes going, but it feels forced and a bit desperate by the end.  It plays out like an over-the-hill comedy duo forced to go on a late-night talk show to do their "who's on first" joke one more time because they have nothing else going on.  The book looks great, but there isn't enough substance for me to recommend it.
6.0/10
Posted by Jim Werner