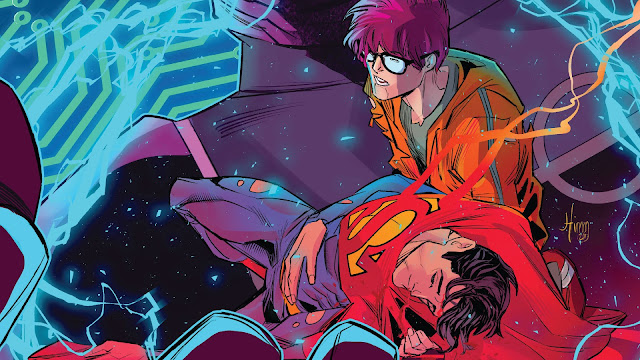 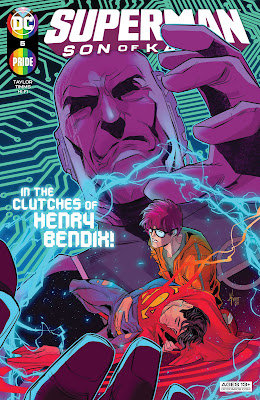 Jon Kent's been Superman for a minute now but maybe he needs at least two minutes to get this Man of Steel thing right because one of the first things he did was fly to the island nation of Gammora and confront their President, Henry Bendix, who, for the last couple of issues has been dead set in taking this new Superman down for meddling in his "Post-Human" affairs. When we left the previous issue we saw Jon get blasted with a solar beam that put his powers into overdrive. Let's jump into this issue and see if our new Superman can slow down and get his powers under control....... and maybe get a smooch too. Let's check it out.

While I would have liked Henry Bendix's solar beam/death trap to lead to some kind of real ramifications for our hero..... you know, since he is so green in his super-heroics, instead we get a Jon that can see and hear more than ever before and because of that, we have our new Superman fly all over the world to save people while continuing to tell us and himself that he has to do it gingerly because of how hyped up his powers are...... What we don't get out of this issue though is anything to do with Henry Bendix. The villain doing anything to our hero or our hero going after the villain for shooting him with a solar beam and before that, trying to kill him and his grandparents. 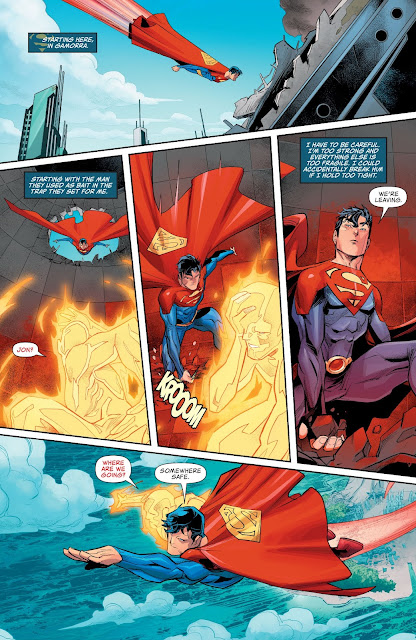 Now, the thing that most people will be checking this issue out for is the big kiss scene between Jon and Jay Nakamura and while this scene is nice and brief because Superman has to do Superman things, the lead up to that moment felt really weird and because of Superman's excited powers and the need to use that power to save all he can, the point where our hero gets to Jay's house and has to crash out comes off less like something that makes sense and more along the lines of Saved By The Bell's very special episode dealing with Jesse Spano's caffeine pill problem. Ultimately though, you get Superman smooching and you get Superman saving folks but it barely feels like a continuation of where we left off previously. 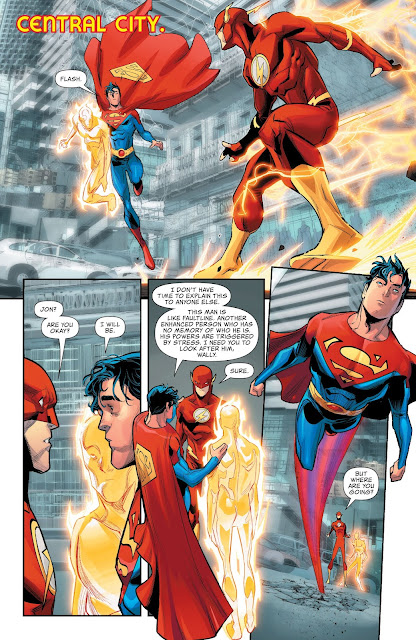 All in all, the art in this book continues to be great and I love the way that John Timms draws our new Man of Steel. I just wish that the story felt like a real continuation of where we left off because where previously Jon seemed determined to confront Henry Bendix, here we just have what feels like fan service of Superman doing Superman things to then lead up to the kiss that everyone has already been shown and while these moments are fine..... it just feels like we didn't do anything else to progress the story in what felt like a natural way and I can only hope that Jon, now that he's crashed for the night will want to get back to some Henry Bendix things for the next issue and hopefully not get blasted with another pep pill laser that will help him with his chores.... because boy do I know that it helps/

While there's a lot to enjoy with this book since we do have Superman doing Superman things, while also giving us the exciting smooch heard around the world, this issue feels like it was written specifically for the spectacle of that and little else because it doesn't feel like a real continuation of where we left off previously because Jon just decides to do other things..... The art looks great though and hopefully next issue we'll get back to taking down Gamorra.