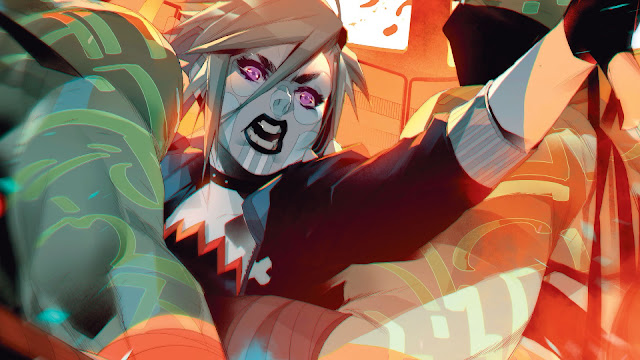 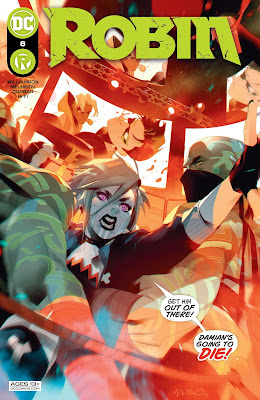 The death tournament of the League of Lazarus continues this issue but don't worry boys and girls, this island blood sport is coming to a close since in the previous issue we saw that the whole kit and caboodle was down to only Connor Hawke and our titular hero, Damian Wayne. Let's jump into this issue and see what Mother Soul's real plan is with this Kumite and how our Boy Wonder and his new friends will be able to stop it. Let's check it out.

While in previous issues I've had problems with the way that tournament was depicted, what with individual panels representing whole fights or just the way that things came too fast or too slow depending on what was going on..... not to mention that sometimes a simple fight doesn't come off all that dynamic, especially when it's the entire focus of the book but for this issue, where we're down to our final two fighters, I do think that things came off a tad more exciting than usual, even if a large focus of this issue was simple punching/counter punching and so on and so forth. It's what I expected though and after the fight is concluded our story really begins. 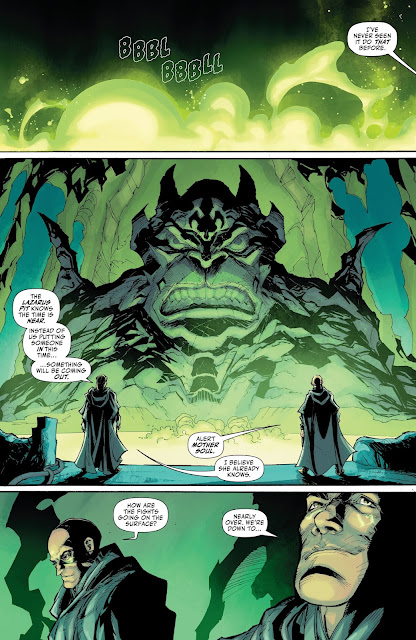 While the fight did come off more exciting than usual, it's the rest of the book that kicks things off in my mind where we can leave the tournament behind and really get to the meat of the story and see what the League of Lazarus and the League of Shadows are up to with this partnership. Yeah, it's not a lot of the issue but we get explanations to important things and I look forward to what's coming next. 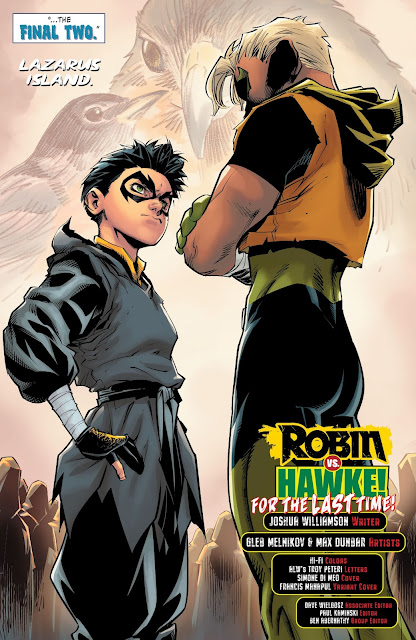 All in all, the art in this issue continues to be amazing and while the tournament aspect to this book is not my favorite bit, I did enjoy seeing time given here to show us who is the better fighter between Damian Wayne and Connor Hawke. That being said though, the fight mostly served as a way to show us the pain that Damian is feeling since Alfred's death and to show us how much Damian blames himself for it and that kind of emotion and drama is something I'm always here for. We're moving past the tournament and I'm happy about that and getting to the real story but for this issue, which I did enjoy despite the hand-to-hand bits taking up so much of the book because boy it fills up a lot of page space, I can't wait to see this ragtag group get together and fight back a supernatural force.

The real story is beginning finally and while I'm happy that the tournament is over, the final bit to it here was actually kind of interesting in pitting Connor Hawke versus our Boy Wonder and showing us who the top bird in the martial arts field is. That being said though, the fight lasted a long time and when we finally get to the really interesting parts of the book it feels like it ends just as soon as it begins.