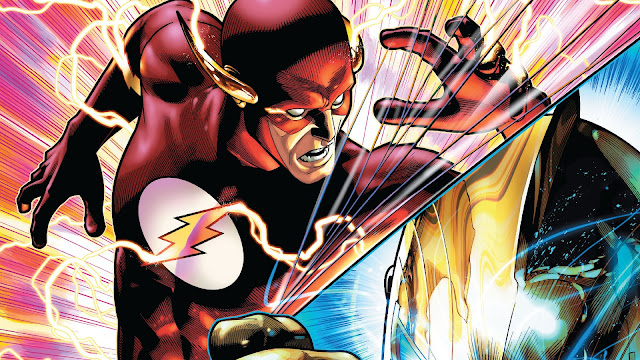 The Reader Is The Hero 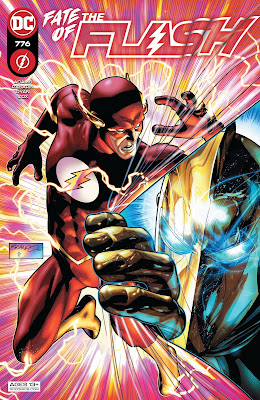 Things have gotten crazy in the Flash which kind of sucks for Wally West who's back in scarlet, has his family back, and has a certain peace of mind since everything that happened to him over the last decade so I'm sure our Fastest Man Alive would like a little peace and quiet with his wife and kids but that's not the case when a cosmic glaive had fallen in Central City, which held Eclipso within it, before the dark being took over the Justice League baddie, Starbreaker. Yeah, things are pretty crazy and that was only the start for our hero because by the end of that issue Dr. Fate came and pulled him into a new world of crazy that we'll explore here on their hunt for Eclipso. Let's jump into this issue and check it out.

In this issue of the Flash we really put a pause on the current story..... sort of.... to give us an issue that's purely gimmick-based. Yeah, you can say that this issue continues the story in that Dr. Fate did take Wally at the end of the last issue and the two need to head off Eclipso at the pass but to do that we go to the strange two-dimensional causeway....... where Dr. Fate puts on his best Ambush Bug impersonation to simply tell Wally that they're in a comic book and their survival depends solely on the reader tipping their book, turning the page and doing a Where's Waldo at the end of the issue. 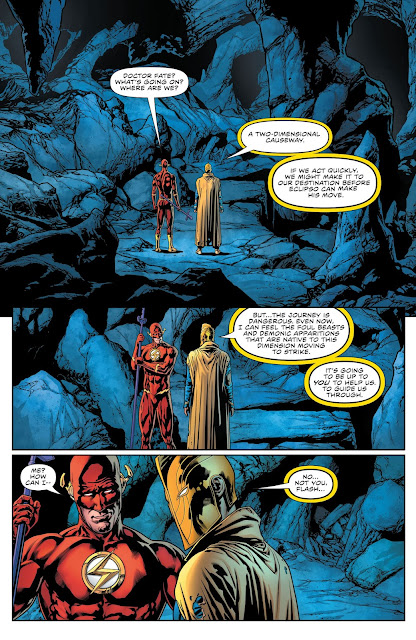 I'm purely here for the story so having this gimmick issue comes off as a real disappointment, especially when I'm trying to find out why Eclipso was in a cosmic glaive and not getting any new info on the main story and having a strange cavern that's just full of gremlins and monsters with no explanation, not to mention that I'm personally reading this issue on a laptop and wasn't able to play along, not that I would anyway just led to a story that wasn't all that enjoyable and took our heroes to a place that I personally am not a fan of. That being said though, besides the cliffhanger location, other DC characters show up that I can't wait to see this strange duo team up with in the next issue. 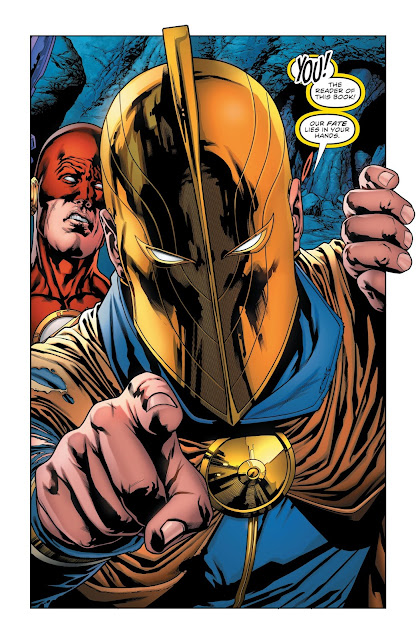 All in all, the art in this issue is really great and I really can't fault it for anything because Wally and Kent Nelson look great..... It's just that the story is non-existent and does very little to progress where we previously left off and I'm just not a fan of gimmick issues that are just there as a filler. Yeah, maybe some people can have fun with this but I just found it as a waste and I can only hope that the next issue expands on what's going on with Eclipso and Starbreaker and doesn't just present something that feels silly and unneeded.

If you're looking for a pure gimmick issue that doesn't really do anything to progress the story then maybe this issue is for you but I just found it to be a really disappointing addition to our story and was just simply happy by the end that the art was pretty great because beyond the art, there's really nothing here and that's a shame.