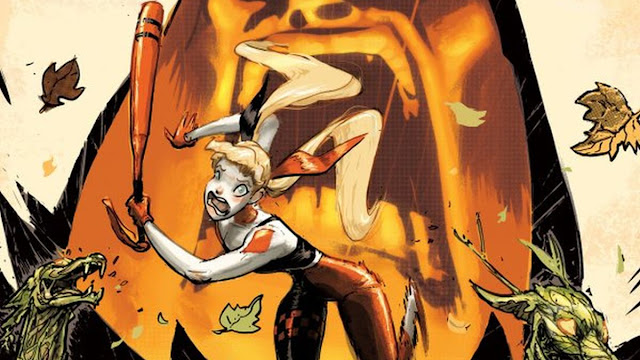 Kevin Is The True Hero We Want and Deserve 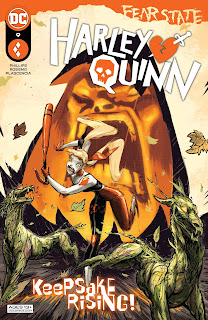 Written By: Stephanie Phillips
Art By: Riley Rossmo
Colors By: Ivan Plasencia
Letters By: Deron Bennett
Cover Art By: Riley Rossmo
Cover Price: $3.99
Release Date: November 23, 2021
Harley Quinn #9 continues its connection to Fear State with a split issue that tackles Harley's escort mission to get Ivy back to Queen Ivy to reunite the whole and save Gotham. Meanwhile, Kevin continues his hero's journey by saving trapped employees as S.A.F.E. HQ burns to the ground.

I love everything about Kevin's story in this issue. Harley can go pound sand.Sometimes the simplest critique is the best critique. Just sayin'.

As mentioned in the opening blurb, this comic is almost two independent stories happening at the same time. Kevin is developing and growing as a character, and Phillips completely nails Kevin's growth from a scared, lonely guy who fell into the wrong crown to becoming a self-actualized man who chooses his own path, whether he's ready for it or not. 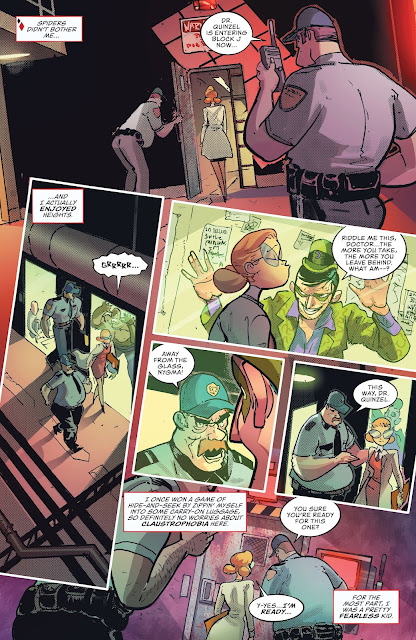 Picking up from the last issue, Kevin charges into S.A.F.E. HQ when a fire rages out of control. He has no powers, no exceptional physical prowess, no special gadgets, or anything about him that one would consider exceptional. But what Kevin does have is heart and he charges into those flames to save the techs trapped inside. There's even a moment where Kevin encounters one of his tormentors when he was a "guest" of S.A.F.E. and Kevin is forced to make a secondary choice about doing the easy thing and the right thing.

Phillips is writing the hell out of Kevin, and he is the true gen of this series.

Conversely, Harley is running escort for the Ivy shard with the intention of getting her back to Queen Ivy under the Gotham sewers. If you've not been keeping up with the main Fear State titles, you'll be a little lost. But to be fair, all you need to know is Harley needs to get this "piece" of Ivy to where she needs to go for the good of Gotham, helped along the way by Catwoman and the Gardener. 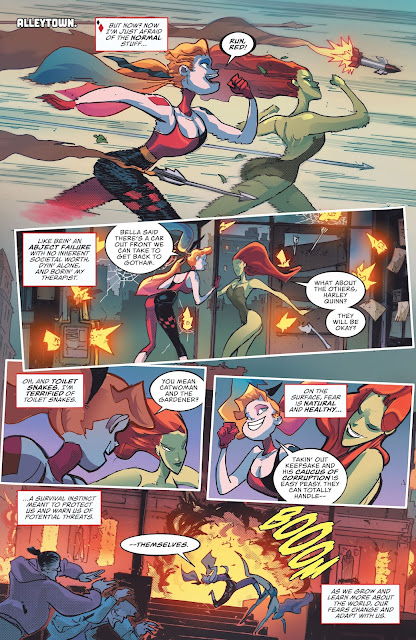 The big threat standing in Harley's way is Keepsake. When he catches up to the fleeing couple, they beat Keepsake pretty handily, so there's not too much. Keepsake is not a formidable villain, Harley beats him with unbelievable acrobatics (and not in a good way), and ultimately, the entire chase was just an excuse for Harley to crow about her feelings for Ivy. The chase is silly, the boss fight is silly, the whole plot involving Harley in this book is silly. It's strange to say that Phillips does her best work in the Harley Quinn title when she's not writing about Harley Quinn.

Bits and Pieces
Harley Quinn #9 is half of a good comic. Everything surrounding the character progression and growth of an originally ridiculous side character, Kevin, is turning out to be the highlight of the series. Everything else related to the titular character is silly nonsense.
6.5/10