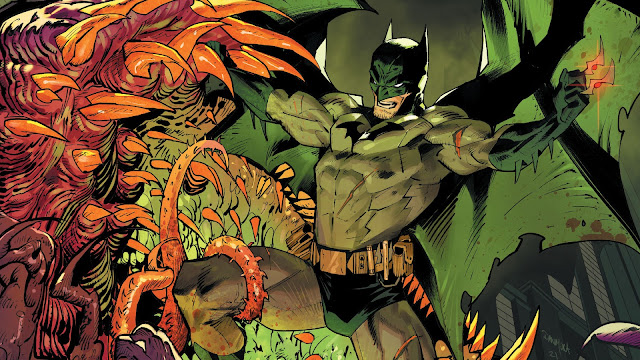 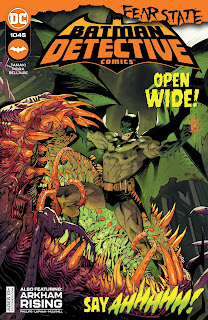 In the last issue Batman and Nakano were trapped in the sewers after an explosion, and then attacked by colonies of little insect creatures thought to be the spawns of Hue Vile after they came out of their disgusting egg clusters. Bats was able to get them off of Nakano by tasering him, but also leaving Nakano unresponsive.

And that's where this issue picks up. With Nakano on the ground, unconscious, and Batman trying to revive him. He's able to, and as they make their way out of the sewers he's contacted by Oracle who was able to somehow boost her signal to get to them. As he's telling her there could be many more eggs around Gotham, we visually see this red mass with weird scaled tentacles coming out of the ground onto the streets of Gotham... and it starts going after civilians.

After a brief showing that the Batfamily is out there looking for these creatures, Batman and Nakano reach a huge wall of grossness in the sewers, which is kinda reminiscent of Stranger Things, and they get the hell away from it as fast as they can.

In a different area of the sewers, Batman tells Nakano about Vile, and Nakano is furious. This was a man he employed and trusted, and he blames Batman for not coming to him to let him know. Can you actually blame Nakano for being angry with Batman here?

Even with that, being stuck with each other gives them time to rely on each other and have an understanding by calling each other out while doing it. Once they're finally on the surface, they get into a tussle with a huge and disgusting creature that I can't even begin to describe. Even with Batman telling Nakano to run, Nakano tries to help by zapping the thing with the taser but it's too big and strong.

Then Nightwing, in hindsight like an idiot, flies in with a Magistrate aircraft and destroys the monster so the Magistrate gets credit for saving the city. Ugh. In the end, Batman and Nakano are working on things. They're both open to having some sort of working relationship, but with caution. And Nakano wants to refine his target list.

Bits and Pieces
This is an issue that was needed; to get Batman and Nakano kiiiindaaa understanding each other and know that they need to work together, and what better way to do that than desperate survival. Overall, it's not bad and I have no issues with it. It's nothing special either (not an insult, btw) other than the art, and that's okay because it could possibly be simply showing us a moment where the timeline that would be Future State shifts to something else. Again, Mora's art, mwwwwaaaa!!!
7.2/10
Posted by Joey Casco CSW/CSS