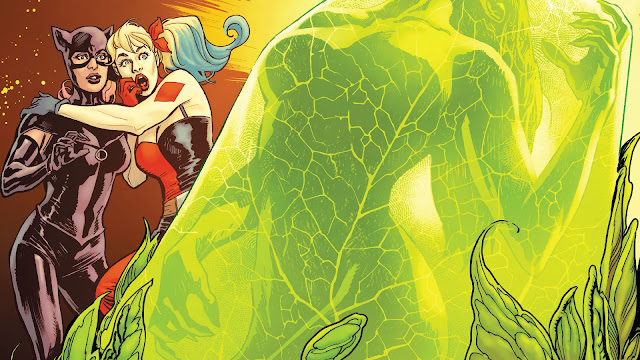 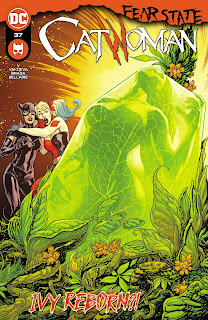 Writer: Ram V
Artist: Nina Vakueva
Cover Price: $3.99
Release Date: November 24, 2021
Of all the writers having to stop their regular runs to tie into Fear State, I think that Ram V had it the worst.  He had based his run as a separate thing to the Batman book, playing with the supposed "Year Off" the two were having and was trying to set up some cool stuff for Selina, including getting more of her own Rogues Gallery.  Then DC announced that his run was ending with issue #38, so he had to tie in with Fear State while also trying to tie up his run.  That kind of sucks for a guy who was doing a decent job of things with Catwoman, but I guess that's what happens when you go and do a big Marvel book, right?  Let's get on with the review and see what Ram V could make of this whole Fear State thing...
As I said, Fear State has thrown a bit of a wrench in Ram V's Catwoman run, and it doesn't help that this book is hitting the shelves a week after Fear State pretty much ended.  I know we still have the Omega issue coming up, but that doesn't change the fact that we know how most of the story ends, especially the part most important to this book, Ivy. 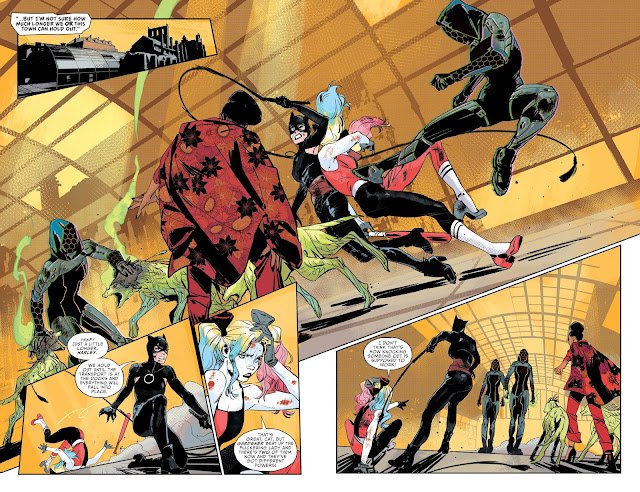 If you have been reading, most of the Fear State stuff in this book involves getting the naive Ivy out of Alleytown while the shit hits the fan.  The shit being the Magistrate knocking heads and Riddler playing a double-cross.  It's a will-he or won't he situation that might have been more interesting if Ram V wasn't also busy putting his toys back in the toybox for the next creative team.
Despite all the issues I've mentioned, Ram V gets more out of the few Fear State scraps than expected.  He continues the good trend of making Selina the most intelligent gal in the room by showing you she not only anticipated the Riddler's betrayal (no real surprise there) but set up a counter to it. In addition, we see the Second Chance Squad and the Strays doing their thing and we even get a guest star showing up that surprised me... until I remembered that Ram V is using him in an upcoming Urban Legends issue.  All that, and a reminder that Selina's time in Alleytown is coming to an end soon, made for a decent Fear State tie-in, but more importantly, a good Catwoman issue overall. 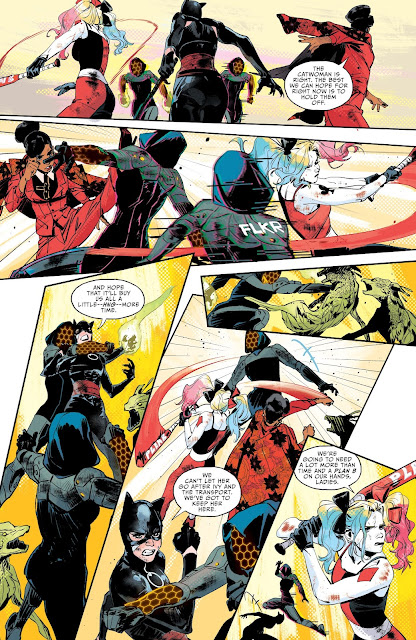 It's a shame that Ram V had to get involved with Fear State in the first place, but he does his best to give fans of his Catwoman a reason to read it even if they aren't even involved with Fear State itself. So yea, it's not perfect, but the art is good, and there is enough here for me to give everyone props for squeezing what they got out of it.
Bits and Pieces:
Despite many obstacles, Ram V does a good job of giving readers a decent Fear State tie-in, but more importantly, a good Catwoman issue. It's a shame that his run is ending soon, but at least he is making the best of an odd situation as it comes to a close.
8.0/10
Posted by Jim Werner