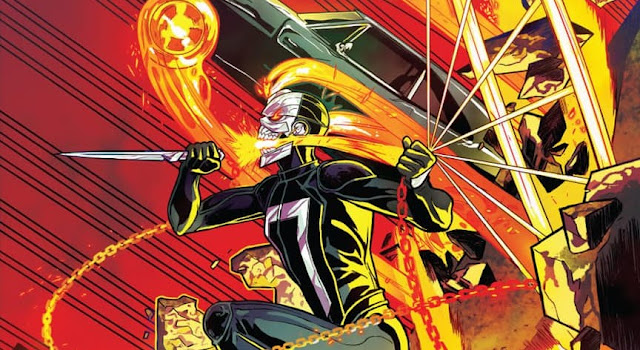 Whose Comic Is It Anyway? 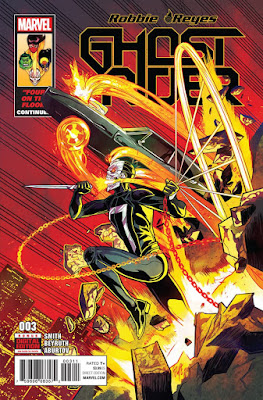 I was incredibly disappointed by the previous issue of Ghost Rider as it focused far too much on our visiting heroes rather than dealing with our main character. Don’t get me wrong, I like seeing other heroes pop up in different books but it was the second issue! You would hope that you main character would at least be at the forefront of the first story arc in his book. That said, we ended the last issue with a confrontation between The Hulk and Ghost Rider and this issue promises to see them trade blows. I’m incredibly excited. Lets jump right into this issue.


The issue begins where we left off. Robbie Reyes hits the gas in his car and flames shoot out as he barrels toward the Hulk. Amadeus is able to catch the car but the two seem to be at a standstill. Robbie seems to believe that it is not the Hulk that is in front of him but rather Mr. Hyde with a new green pill. Robbie hits the gas but the Hulk stands his ground so Ghost Rider opens up ring of fire around him. Amadeus suddenly feels some vibrations underneath him and he and Wolverine immediately know it is the monster they’ve been tracking. The monster shoots out from the ground and faces them just as Ghost Rider teleports Hulk away. 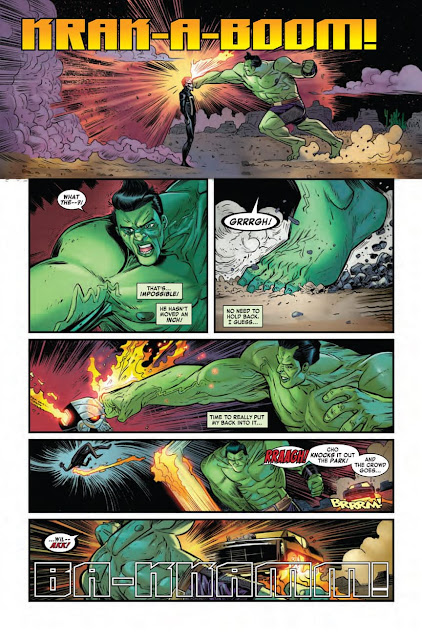 The Hulk and Ghost Rider find themselves in the middle of the Arizona desert where they finally decide to really fight. Hulk knocks Ghost Rider’s car into the air and slams his fist into Ghost Riders face, however, this does absolutely nothing to Robbie. Hulk decides that he can finally go all out and uses all his strength to knock Ghost Rider back. The two trade blows for a while both of which seem to struggle with actually hurting the other. However, at a point Hulk finally seems to get an upper hand when all of a sudden Robbie’s mask begins to heat up and turn back as Ghost Rider has now gotten even more powerful. Just before fighting though, Robbie changes back into his human form claiming that Hulk’s soul is pure.

Robbie and Hulk talk for a moment before Robbie teleports the two of them back to where they came from. They return to find Wolverine just hanging out with the gang members from earlier, eating some food. Robbie has transformed back into Ghost Rider at this point and gets in Mad Dog’s face before ultimately turning away. Hulk and Wolverine regroup to fight the monster but just as Hulk offers to have Ghost Rider join them, Robbie speeds off. Back at the garage, it seems that Robbie is talking with his boss about the new hire Mad Dog. The boss stands up for him and it’s clear that relationship will blow up in the coming issues. 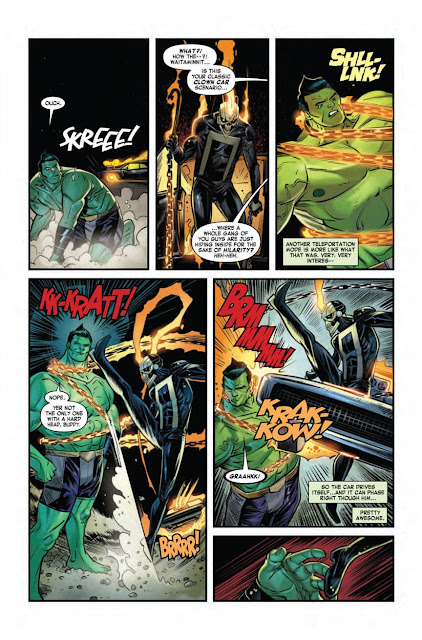 Back with Hulk and Wolverine, they’ve tracked the monster to Las Vegas and find it tearing apart a casino. The monster has grown again since it last saw them and Hulk and Wolverine are once again unable to do jack. After the monster escapes, having handed their asses to them, Hulk and Wolverine discover Silk at the scene. The monster is clearly following the pattern of seeking out powered humans and it bit Silk to get some of her powers. Silk agrees to join their little mission but wants to call the cavalry in first. The three go out to the desert where they wait until a plane lands near them. Out walks Phil Coulson and May from S.H.I.E.L.D. and they are ready to help. This is where the issue leaves us.

Okay, so let’s get a couple things out of the way first. The fight between Hulk and Ghost Rider is fucking badass. Sure, it ends kind of anti-climatic and the reason they are fighting in the first place is stupid (seriously? You see a big green guy and instead of thinking of the Hulk, you think of Mr. Hyde?) but when they were actually fighting for a couple pages it was glorious and awesome. However, then it ends and we are left with some weird scenes that are mostly set up for what’s going to happen. Instead of an interesting Ghost Rider story we are getting more and more of Hulk and Wolverine and now Silk and S.H.I.E.L.D. I’m sick of reading a Ghost Rider book that doesn’t focus on Ghost Rider. This issue gets points for the fight but some majorly bad marks for everything else.

Ghost Rider has fallen hard since its awesome first issue. Once again we focus more on Hulk and Wolverine than we do on Ghost Rider and now we are even throwing Silk and S.H.I.E.L.D. into the mix. It's frustrating to read a Ghost Rider book that doesn't have a lot of Ghost Rider in it. The fight between Hulk and Ghost Rider is fucking sweet but it doesn't make up for the rest of the comic. I can no longer recommend this book. Please let this story arc be over so we can move on.