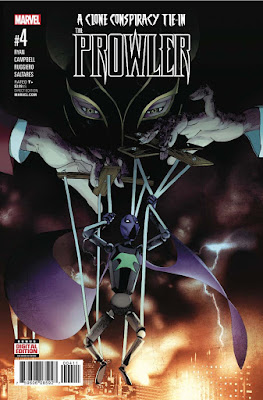 Ya, well the Jerk Store called, and they're out of Prowler’s!

Hey you, yeah I’m talking to you six other Prowler fans out there, are you still interested in what our purple suited friend is up too?  Oooh you’re new around here? Is this thing on, am I all alone?  In any case, the Prowler has caught himself in quite the predicament. See he needs this little “blue” pill, which is never a good thing no matter what situation you’re caught in, especially if it’s a matter of life and death.  Forget about the Clone Conspiracy, is this long time Spider-man frenemy even going to make it out of this issue, let’s find out after the jump.


For starters be sure that you are up to date and have read Clone Conspiracy #4 because the issue starts by throwing you right into the fight scene placed in the middle of that event. Spider-Men struggles to take on an entire slew of resurrected villains, while Prowler, sensing his friend in terrible trouble, jumps in to help fend off the oncoming hoard … this will be the characters only redeemable action this issue. 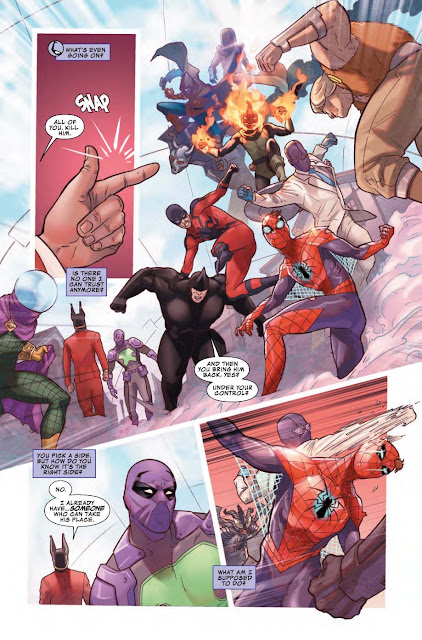 From there we are thrown back to the events Prowler himself went through, two hours previously, to get his medicine.  After being rescued last issue from Electro’s clutches by Julia Carpenter, former Madam Web, the two now make their way through a New U base, on the hunt for Hobbie’s room, to get his magic blue pill.  Once Prowler takes this “pill” Julia leaves him to recover and continue her own investigation, this time from the inside the New U headquarters, looking into the company’s nefarious intentions few know of.

Julia quickly discovers a resurrected but dying “O.G.” Madam Web, stay with me now, she refuses to take her pill any longer, and warns of a doomed future.  Julia returns to Hobbie, informs him she’s has what she needs, and is now going after Jackal. Hoobie, at this point in the story still defends Jackal’s actions, since he’s responsible for resurrecting Prowler, this causes conflict. Ultimately with Prowler too weak to move Julia slips off to do her thing as Prowler still struggles to get to his feet. 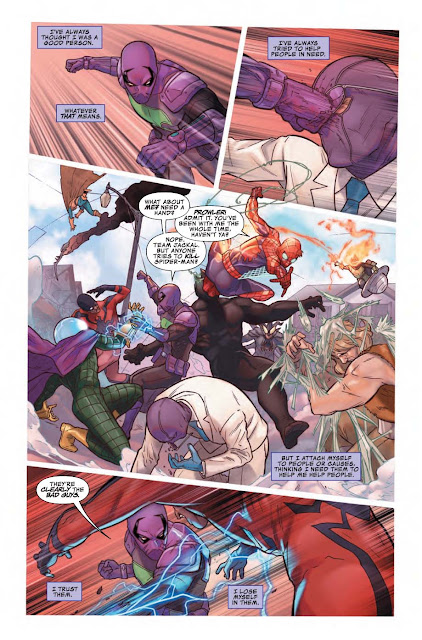 At this point the flashback story catches up with the beginning of our book all before we get a brief tease of some new stuff. Prowler, finally able to pick himself up off the bed from his latest ass kicking at the hands of Electro, eventually joins the rest of the “clone crew” in Haven with Jackal.  A signal goes off inside the New U building, as it does in Clone Conspiracy #4, and Prowler with the rest of the clones attempt to fight off the Carrion virus.

Prowler is mildly successful and leaves the rest of those struggling to cope with the sound of the signal behind eventually running back into Julia again inside New U. Hobbie blames Julia for setting of the signal, sabotaging New U headquarters and the clone project, attacking her in the process, however Julia quickly disposes of a weakened Prowler as our issue comes to an end.  After the conclusion I sat quietly, taking a moment to reflect about why I’m reading a book about a “hero” who hasn’t even won a fight in his own title since this thing started, who is also fighting someone who just helped him ... that’s weird right? It’s not just me? 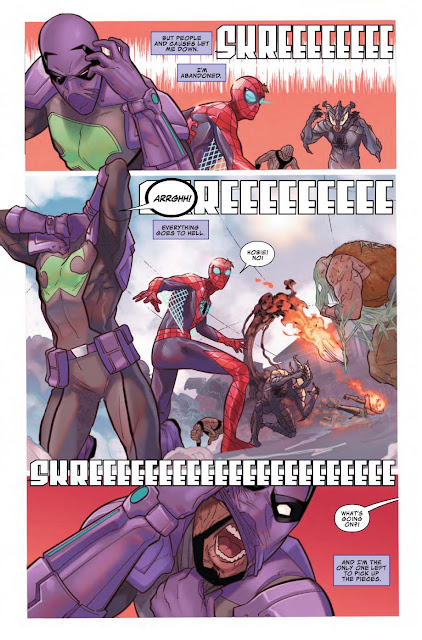 The story of this issue was mediocre at best because it doesn’t really contribute much to the overall picture of the Clone Conspiracy event. Most of the issue takes place in the past of the events big picture and this series is having trouble establishing an interesting conflict to follow.  Prowler is obviously a conflicted individual, which I can get behind, but he has shown no ability to be a “hero” worth reading about so far because he’s blindly following the villains plan, he can’t fight to save his life quite literally, and after attacking Julia with no questions asked, after she just saved him, is coming off just very unlikable in general.

The saving grace of the issue for sure was the art team of Javier Saltares, Jamal Campbell, & Lorenzo Ruggiero. All the panels, the characters, even the background and lighting all look fantastic all the way through every page of this issue.

Bits and Pieces
After a fascinating start to the series, the Prowler as a stand-alone book is struggling to find an intriguing conflict for our hero to really sink his teeth into.  Combine all that with fighting skills that seem sub-par and an unlikable demeanor, especially this issue, and this maybe something to avoid until it can steer clear of tie-in status and truly allow the character to flourish … if it gets that chance.